An exposé on left-handed Christianity. 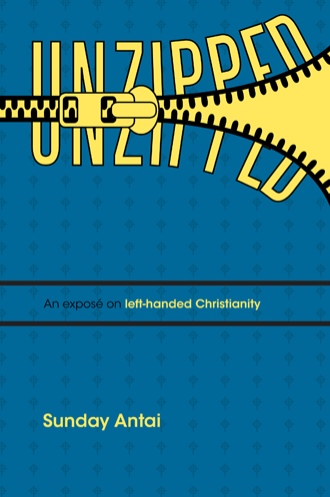 If anyone teaches otherwise and does not consent to wholesome words, even the words of our Lord Jesus Christ, and to the doctrine which accords with godliness, he is proud, knowing nothing, but obsessed with disputes and arguments over words, from which come envy, strife, reviling, evil suspicions … who suppose that godliness is a means of gain. From such withdraw yourself - 1Timothy 6.3-7

A wise man’s heart is at his right hand; but a fool’s heart at his left – Ecclesiastes 10.2

The late 20th and 21st centuries have witnessed an explosion in the number and shades of “Christian groups” across the world. They range from the barefooted, white-garment-wearing, fortune telling, money-first, neo-atheistic, to the happy-clappy and happy-go-lucky ones. The groups are so many, and almost so, their doctrines; yet they all claim the Bible as their authority. This has created confusion in the minds of many because of the mutually contradictory and conflicting doctrines they propagate. Truth, however, is that behind most of the doctrines is the drive to achieve what the groups conceive, even if it means to deliberately deceive, regardless of what Jesus Christ taught, lived and died for.

While these doctrines-afield reign, many precious souls are lost every second of the day into eternity without Christ because they believed and practised the wrong things, though they might have been sincere in doing so. Many Christians do not seem to know what is exclusively Judaic in Scripture. They do not seem to know what the New Testament is, and its difference from the Old Testament. This is basically because they hardly study the bible for themselves. They depend on others who tell them things, and just because they were read from the Bible, they accepted them as all right and doctrinal.

However, Luke thought differently. Even though there were extant records on the Lord’s life, Luke would not just sit back and lap them all up. And so, he did his own personal investigation. His finding is the gospel named after him, which he called “an orderly account.” He did so in order that we “may know the certainty of the things [we] have been taught” (Luke 1.1-4). To fully appreciate Christianity, we should not only know who Christ is, and His mission on earth, but also the raison d’être for the church, whom He founded, as opposed to the Jewish temple or synagogue.

Jesus Christ is the founder and owner of the church (Matt. 16.18). It consists of all believers in Christ and exists to further Christ’s interests. It is founded on Jesus Christ and His apostles (1 Cor. 3.11; Eph. 2.20). Its health and well being are in Christ’s hands (Jn. 15.4,5; 1 Cor. 3.1-9). In Matt. 28.19,20, the Lord commanded His disciples to go teach “all the nations” to “observe all things, whatsoever” He had “commanded” them to teach. This defines the borders and fixes the terms of operations. The Lord also directed the disciples to “make disciples of all nations.”

We can only be disciples indeed if we continue in His word (John 8.31). We are His disciples if we have love for one another (John 13.35). We can only be Christ’s disciple by carrying His cross and following Him (Luke 14.27). Have we met these conditions? We must earn what yearn for.

The church [Gr. Ekklesia, meaning, “called out”], was officially inaugurated [not started] (see Matt. 18.17) on the day of Pentecost, when about 120 disciples of Jesus Christ were “all filled with the Holy Spirit, and began to speak in other tongues, as the Spirit gave them utterance” (Acts 2.4).

The Early Church was committed to evangelism and building the spirit man of the members, preparatory for heaven. When it came to choosing between food matters on the one hand and the ministry of the word and prayers on the other hand, the apostles went for prayer and the ministry of God’s Word. We need to return to those basics today. Speaking at the church’s inauguration, Peter pointed his listeners to Christ Jesus (Acts 2.22-28). He told them to, “Repent” (Acts 2.38). Those who repented and baptized, “were added to them”; clearly, by the Holy Spirit. The converts, “continued steadfastly in the apostles’ doctrine and fellowship, and in breaking of bread, and in prayers.” That doctrine could never be contrary to what they learnt from Christ. Peter was to later tell Christians to “grow in the knowledge of our Lord and Saviour Jesus Christ” (2 Peter 3.18). In chapter 1.2, he would have us realize that grace and peace are ours, “in abundance through the knowledge of God and of Jesus our Lord.”

In his longest recorded prayer, the Lord told the Father, “Now this is eternal life: that they [the disciples] may know you, the only true God, and Jesus Christ, whom you have sent” (John 17.3). We can only know God through our knowledge of Jesus Christ.

Most people know about God and His blessings, but do not know Him. But the primary and greatest thing we need is to know God and His Christ. Though God worked uncommon miracles through Moses, yet Moses cried to God to let him know Him (Exo. 33.13). David did the same thing (Ps. 42.1,2).

Paul declared, “For I resolved to know nothing while I was with you except Jesus Christ and Him crucified” (1 Cor. 2.2). He would later tell the Philippians (3.10), “I want to know Christ and the power of His resurrection and the fellowship of sharing in His sufferings, becoming like Him in His death.” We cannot afford to do less!

When Paul was confronted with a mortal challenge, he could have cracked and budged under the weight of the Jews’ false accusations and oppressions. Facing even a colonizer-governor Felix, he “spoke about faith in Christ Jesus” and “discoursed on righteousness, self control and judgment to come” (Acts 24.24,25). Paul clearly told Timothy (2 Tim. 2.7) to keep to what he heard from “me as a pattern of sound teaching with faith and love in Christ Jesus.” There is sound teaching, and it has a pattern. Are we comparing what we teach, or are taught, with what the books of Timothy say? Are there differences between what we practise and what those books teach? In 2 Cor. 4.5, the great Paul declared: “For we do not preach ourselves, but Jesus Christ as Lord, and ourselves as your servants for Jesus sake.” Earlier in Rom. 1.16, he said that he was not “ashamed of the gospel of Christ”, and described it as “the power of God for the salvation of everyone who believes.” Paul and his co-workers saw themselves as “servants for Jesus sake.” They did not lord it over the other Christians. The word, “apostle” even means “messenger or delegate.” The apostles followed Christ’s admonition that he who would be first must be last; and that He himself came to minister, not to be ministered unto (Luke 22.25,26; see 9.46-48; Matt. 18.1-5).

In 2 Cor. 11.2, we read, “I promised you to one husband, to Christ.” In Gal. 1.7, Paul again emphasised that the “gospel of Christ” is what the Galatians must follow. He even placed a curse on whoever would preach “another gospel” other than the one he preached. No new revelation can torpedo what is already written!

At his defence before Agrippa, Paul related his encounter with Christ on his way to Damascus. At that point, he was commissioned by the Lord to go open the eyes of the Gentiles, “and turn them from darkness to light, and from the power of Satan to God, so that they may receive forgiveness of sins” and be sanctified through faith in Christ (Acts 26.18).

Hardly are there any issues in life that are more emotive and contentious than religion. Part of the reason for this is that rarely do any two religions agree on most of their teachings about deity and humanity: there is so much divisiveness and mutual distrust.

Christianity is not spared these mutual acrimony and disaffection, even within itself. Thus, there are inside it such characterizations as Orthodox, Pentecostals, Evangelicals, etc, with each claiming superiority of spirituality over and above one another, and citing portions of the Bible to argue its positions. But this has erected confusion in the minds of many, who find it difficult to dissect what are right or wrong doctrines in the face of one group of Christians accepting certain practices or beliefs, while another group condemns the same things.

Unzipped! traces these doctrinal crises, in part, to misrepresentation of the two parts of the Bible: Old and New Testaments, submitting that biblical Christianity is all about what Christ and His disciples taught and practiced. In other words, it posits that if Christ and His apostles did not teach or practice a doctrine, Christians do not have to bother about it. The book challenges all who call on the name of the Lord Jesus Christ to look up to, and live for Him, as the author and finisher of their faith. It therefore contends that biblical Christianity, as opposed to its religious version, does not admit of syncretism.

Born in Udesi, Nigeria’s Niger Delta, Sunday Antai is an ex-atheist who was born again in 1981. He has written and spoken extensively on Christianity and held several leadership positions in Christian groups. He is the author of Outcome-Driven Speaking(2010), and is joyfully married with children.