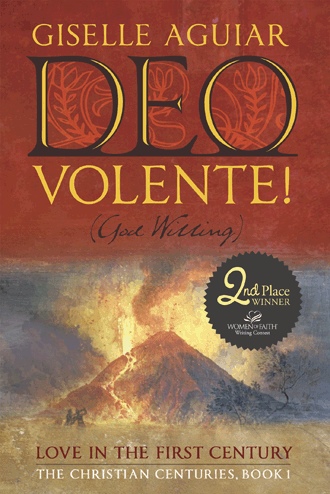 “Why did it take you so long to invite me to your Christian meetings?” Claudia asked her cousin.
Paolo seemed to be dreaming.
“Paolo?”
“Oh, sorry, Claudia. I was just remembering that first conversation with Anthony. He was very persuasive. He’s a good teacher. Now, what did you ask me?”
“Why did it take you so long to invite me?”
“I have been trying for months to get you to come with me, but you are so stubborn! You always had something else to do. You kept using your mother as an excuse—that you needed to help her with this or that, but I know you must have been alone in your room reading.”
“Stop teasing me. Am I not here tonight?”
“I thank the Lord that I was persistent and patient with you. I know you and your curiosity. You are also a smart woman and I knew that as soon as I brought you to a meeting you would begin to understand that the Christian way is the truth.”
“Well, I still don’t understand.”
“Anthony will see that you do. I trust him and leave you in his capable hands.”
“Are you sure it is all right for me to meet with Anthony alone?”
“I’m sure you can manage to sneak out of the domus. I have seen you go down to the beach with those scrolls of yours.” Paolo smiled. “Anthony is a good man. I trust him and most importantly, I trust him with you.”
“Very well, if you are sure. Imagine what would happen if Stephanus or my father saw us!”
“Let’s not think of that, because it won’t happen. It is late, we had better go.”
They finished their wine and left. Outside, the night had grown colder and the breeze from the bay was now a hefty wind. It was humid and the smell of rain permeated the air.
“Let us hurry and get home, Claudia. It looks like a storm is coming.”

The midday sun was warm and the canvas cover that shaded Aurelia Verina of the Julii did not offer much relief from the heat. She fanned herself with a cluster of peacock feathers as she endured the bumpy ride in the carpentum—a large four-wheeled, wooden, mule-drawn coach—down the Via Appia from Rome south to Puteoli. Legions of soldiers constructed the Via Appia over 300 years before of large paving stones set in gravel, clay or mortar. The stones, polished smooth from the thousands of Roman legions having marched over them, were uneven and the wheels of the coach seemed to find every crevice. Even though Aurelia sat on several silk pillows, she was extremely uncomfortable. Her rough journey had started before dawn that day and she presumed she was about half way home.
Since the age of ten, Aurelia served as a Vestal Virgin at the temple of Vesta, the goddess of home and hearth, in Rome. Her thirty-year commitment, and vow of chastity, were now over and she was returning to Puteoli to live in her sister’s house. She and her sister, Julia Paulina of the Julii, boasted of their direct lineage to Julius Caesar and the prestigious house of the Julii.
Aurelia had stunning features common to the northern Italian provinces—light brown hair and clear blue eyes. As a little girl from a Roman Familia Patricius, her beauty almost dictated that she be submitted as a candidate to be a Vestal Virgin. She found it hard to believe that her obligation to Vesta was finally over.
During the long ride, Aurelia stared at the rolling hills of the Italian countryside and thought about her role as one of six priestesses of Vesta, originally just the goddess of home and hearth. Vesta later became the goddess of the flame that symbolized the Roman state. She would miss the small temple in the corner of Rome’s immense forum with its circular shrine surrounded by columns and oculus in the center over where the eternal flame burned. One of her main duties was to keep the flame lit at all times and to maintain the gardens around the temple and house of the virgins. She also assisted during religious sacrifices and services. She had her own tablinium on the first floor of the house and her room in the second floor. For the first ten years she was a student, the second ten years she served and the last decade, she taught the young students as she had been taught.
Aurelia shook her head as she contemplated the Roman belief that the stability and salvation of the state depended on the accurate performance and, most importantly, the purity of the Vestals. A fall from virginal grace resulted in the severe punishment of death by burial with a loaf of bread and a lamp, while still alive in the Campus Scelleratus – the field of the wicked. Keeping her chastity was a tremendous challenge for Aurelia. Men flirted with her at every religious ceremony. Only the memory of her childhood friend—the boy she would have married had she not gone into the service—kept her chaste. This morning, before she left on her trip, she stopped at the temple of Fortuna, the goddess of chance, to pray that fate would be in her favor.
At long last, she was free to marry and there was only one man in her mind to fill the role of her future husband—that wonderful childhood friend—Darius.

Puteoli, located on the Bay of Neapolis, was a popular resort for Roman nobility. With its close proximity to several volcanoes, it offered solfatara—volcanic vents emitting heated vapors and sulfur springs. The Romans managed to harness the steaming liquid and vapors and prosper from it. The Puteoli public baths were renowned for their healing waters and their medicinal value with cures for a variety of diseases.
Although the houses of the wealthy boasted private bathrooms with indoor plumbing and hot and cold running water, Romans preferred the public baths. At the baths, built by the original Greek settlers then expanded by the Romans, bathers discussed politics openly as well as conducted business deals and drew up contracts.
That afternoon, Claudia’s father, Marcus Metellus Varilius, sat in the frigidarium pool with his son, Stephanus, and his assistant, Darius Strabos Serranos. Servants used strigils on Stephanus and Darius to scrape dirt and oil off their skin.
Marcus leaned back against the cool mosaic tile of the pool and took a deep breath, taking in the scent of the mint and olive oil ointment. “This is so refreshing! I so prefer this pool to the others.” He poured cold water on himself with a patera. “I could stay here all day.”
Marcus, born into a third-generation branch of Roman nobility, and as praefectus urbi,  — one of the city’s two duoviri — elected magistrates —carried on the family tradition like his father and grandfather before him. He governed the city courts in the basilica and handed out the emperor’s justice — anything from a fine to fill the city’s fiscus to a crucifixion if warranted.
Of average height with short, straight, dark hair and clean-shaven, he looked young for a man nearing 50. He enjoyed sitting outside under the sun in the solarium and then coming in to refresh himself in the cold pool. His skin was tan and shining with oil. He felt exceptionally relaxed right after a massage and special sexual servicing by the young masseur.
“My daughter, Claudia, should have married when she reached puberty at the age of twelve as Roman law allows—or at least by fourteen. She’s twenty now and I cannot tolerate having a spinster daughter living in the house.” Marcus spoke with the haughtiness of a man of position with higher aspirations.

A Romeo & Juliet story set in 1st Century Italy with an awesome ending!

Claudia: The twenty-year-old daughter of the Roman Magistrate attends a Christian church where she meets and falls in love with the son of the bishop.

Anthony: The son of the bishop and a local merchant, he falls in love with Claudia as he teaches her about Christianity.

Marcus: Claudia’s father betroths her to his assistant, Darius.

Aurelia: Claudia’s aunt arrives after serving as a Vestal Virgin for thirty years with hopes of marrying her childhood love, Darius.

Step back in time and experience what it would have been like to be the daughter of the Roman magistrate, curious about the new sect of Christianity. Betrothed to a man she doesn't love, in love with a man her family would disapprove of, told that the gods she grew up believing in are false, Claudia learns to seek and follow God’s will while coping with her tyrannical father’s plan for her future and his goal of maintaining his “dignitas.”

Puerto Rican born and raised in New York, Giselle Aguiar has traveled all over the Caribbean, the Panama Canal, Alaska, and Italy. Her tour of Italy took her to Rome, Naples, Herculaneum, and Pompeii, where she first experienced the ancient Roman culture.

She wrote several articles on romance and single living for the Singles Resource Guide and has spoken at several Christian singles groups. Published in various newspapers, magazines, newsletters, and a former "Examiner," she resides in Phoenix, Arizona, where she works freelance as an Internet marketing and social media strategist. She’s an avid blogger and is currently writing the next book in the Christian Centuries series, "Follow Me." She is an active member of First Christian Church of Phoenix, where she volunteers at the food pantry. Connect with Giselle and read her blogs at www.giselleaguiar.com. Twitter: @giselleaguiar;