Tales of the Endless Mountains 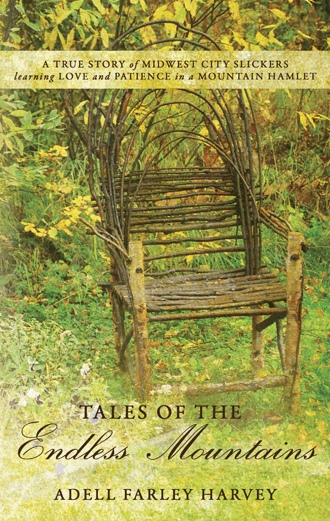 When one of our new parishioners, a widow lady, got in trouble with the milk inspectors, Bill gallantly offered to help. He often cut Billy's hair, so what could be difficult about clipping cows? How was a well-trained engineer to know that clipping cows meant crawling around underneath the beautiful bovines, shearing off hair matted with animal dung?

While Bill was up at the barn doing his thing with the clippers, I stayed down in the farmhouse. Suddenly the phone rang and a voice shouted, "Come quick! Billy fell in the drop!" I ran up the mountain to rescue my son, ready to call the medics, an ambulance, or the coroner. Then I heard raucous laughter as the men yanked Billy from the yucky "drop," the trench behind the cow stanchions, where the cows just naturally drop their droppings.

A young professional family from the Midwest follows God's call to minister in a poverty pocket in northern Appalachia, where their expectations run headlong into the reality of mountain culture. Quirky characters, outhouses, horning parties, cow riding, quilting bees, maple sugarin'—they all become part of the fascinating daily life of the Farleys as they work to rebuild a struggling church in a quaint hamlet of Riggs, Pennsylvania.

Nothing thrills me more than stories of God working in big ways in small places. This is why Tales of the Endless Mountains is such a treasure! Every page contains riveting adventure, humor, and wisdom, all proclaiming God's amazing grace and power. It almost reads like a fictional account. (How could real life in a country church be so dramatic?!) Woven into the tales you will find boat-loads of encouragement, challenges to enlarge your faith, and superb ministry insights—in fact, more (and better!) advice than many books written expressly for that purpose, which qualifies it for a ministry primer. And, I am pleased that it all happened during the Farleys' years of exemplary service with RHMA! - Dr. Ron Klassen, Executive Director, Rural Home Missionary Association

Bill and Adell “Dollie” Farley experienced hand-to-mouth living in one of JFK's poverty pockets in northern Appalachia during the 1960s, living “from God's hand to their mouths.” As faith missionaries with very little monthly support, the family of four learned how to literally depend upon God for their daily bread, the doctor bills, and the bare necessities of life.

Bill, an engineer for a large manufacturing company, and Dollie, an executive secretary for the same company, spent the first nine years of their married life in relative affluence, enjoying a lovely home and lifestyle in central Illinois. Then God called them to become rural missionaries in the Endless Mountains of Pennsylvania. For the next three years, the Farley family struggled with Bill’s deteriorating heart condition, learning a new culture, pastoring a country church, and financial hardships. Tucked away in the mountain hamlet during the turbulent sixties, they lived an exciting life, making themselves available to God and watching Him perform miracle after miracle. Each time a new problem sprung up, they answered it with a question: "Okay, God, how are You going to handle this one?"

Dollie wrote weekly letters to their parents back in Illinois detailing God’s amazing provision, sometimes griping about the hardships, and giving her daily perspective of events as they happened. Both Bill’s mother and Dollie’s mother kept all these letters, which were found in their homes when they died.

The letters provided an accurate description of emotions and events, assuring that long-ago memories are true accounts of what actually happened, a weekly journal that Dollie used as the basis to reconstruct a memoir of those three exciting years.

When Bill died following open heart surgery in 1967, God did not abandon the family. Dollie and their three children returned to Illinois, where God later “merged” her family with a well-to-do widower and his four. God blessed the merger with an eighth child, making the Harvey-Farley Gang a “yours, mine, and ours” tribe. Their exploits are chronicled in Dollie’s first humorous book, My Cope Runneth Over (Thos. Nelson Publishers).

The Harvey-Farley gang also answered God’s call to rural America, selling their electrical contracting business and moving to Idaho as missionaries to the Mormons. In 1995 Jack was asked to become General Director of Missionary Gospel Fellowship in Turlock, California, and Dollie tagged along as office manager. When Jack stepped down from his executive position in 2003, the Harveys became public relations directors for the mission. They continue to serve on the leadership team of MGF and as facilitators for the Punjabi and Hispanic ministries in Yuba City, California. Jack and Dolllie are also VBS leaders for the Sierra Butte Baptist Association of thirty churches in northern California. In the midst of ministry, raising eight kids, spoiling sixteen grandkids and six “greats,” Dollie has authored fourteen books.