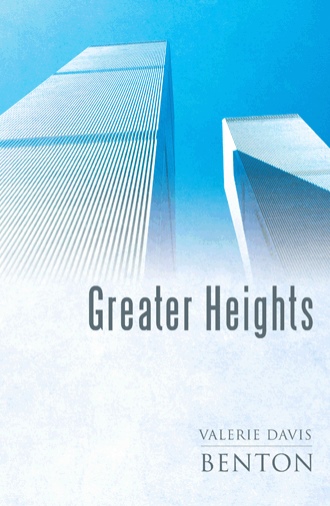 Riley Davenport-Westin’s dream of success is measured by fame and fortune. She achieves her ideal life as a New York TV journalist, married to the CEO of a fourth-generation family business. But her world comes crashing down when her husband’s abuse escalates and she discovers he is cheating on her. She announces she’s leaving him but meets with his strong objections. To avoid the stares and whispers she anticipates from her colleagues at the sight of her bruised face, Riley decides not to go to work the next day. Instead, she wanders the streets of New York, searching for answers. How could she know that one decision would change her life forever?

Greater Heights is the story about one woman’s choices and how having the most valuable things in life comes at a price. Sometimes, the cost is one’s own life.

Valerie Davis Benton is a former award-winning journalist with more than 30 years' experience in print journalism, public relations and marketing. She is public relations manager at a regional hospital system and lives in Leesburg, Ga., with her husband. She also teaches women’s Bible studies and sings at local churches.