A Time to Choose 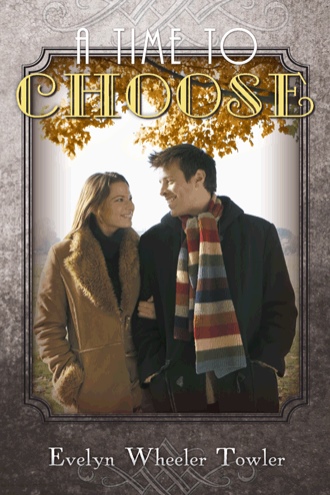 The horses gave them the expected enthusiastic greeting, and they had an afternoon of their favorite recreation. It was good for all three of them, for it did help them unwind after the exciting celebration the day before. Each of them relived every memorable moment of the picnic, the dance, and their guests at the party. They also fell back easily into their old relationship, and the afternoon became one of those days of glorious youth that one never forgets.

“I think Jimmy Denton likes you, Patsy. How many times did he dance with you? He was hanging around you all day long. He’s pretty cute, but kind of dumb, don’t you think?” Penny usually compared all the boys to Kent and they seldom measured up.

Patsy bristled. “He’s no dumber than that Bruce Baylor who thought he was Rudy Vallee! As a matter of fact, Jimmy had some pretty good jokes, and he was real polite. Bruce is always pestering the girls, pulling their hair and trying to make them mad. I don’t know how you stand him!”

“Well, he was pretty nice at the party today. Maybe he’s growing up! He carried my plate and got me some more lemonade, and told me about his brother’s fancy car. Boy, I wish we had a car like that!”

“What kind of a car does he have?” asked Patsy.

“Well, the way Bruce described it, it’s a brand new red roadster, with a rumble seat, and lots of chrome. Lots of power, too. Bruce said it could outrun any car in town.”

Kent put in, “Sure hope he has sense enough not to speed around town. In the country it’s not so bad, but town’s no place to show what a car can do. And from what I’ve heard about Bruce’s brother, he’s pretty much of a show-off.”

Penny was quiet a minute, then commented, “You’re just borrowing trouble, Kent. I’ll be glad when Dad will let me drive! I think I’m old enough now that I’m sixteen!”

Kent looked at Penny in amazement. “You just turned sixteen yesterday, but that doesn’t mean you’re grown up yet! You’re not old enough, Penny, and you know it! You’re still just a little girl!” He was enjoying teasing her, enjoying the way she always took the bait. But he was unprepared this time for the fire in her eyes and the way she bristled at his words.

The horses were now heading home to the stables. Penny suddenly slapped Whisper on the withers and took off ahead of the others. She circled around, coming back to face Kent with fury.

“Well, Kent, girls grow up faster than boys. You should know that – you’ve been around Patsy and me enough! Girls have better sense, too!” and she and Whisper flew off toward the stables..

Patsy watched her go and turned apologetically to Kent. “She didn’t mean that, Kent. She’s always wanted to be older than she is, you know. I guess that’s why she’s always getting into trouble. She’s just sore because she can’t have her way.” Patsy didn’t know whether she was apologizing for Penny, or standing up for her. She was often confused by Penny’s outbursts.

Kent burst out laughing. “That’s okay. I shouldn’t pick on her so much. But she’s such a spitfire that I enjoy seeing how far I can go with her. I never pay any attention to her anyway when she talks like that.” More amused than anything else, he took off after Penny with Patsy close behind.

By the time they had rubbed down the horses and given them water, it was well into twilight. “Come on, we need to get home before dark,” urged Kent. “If I don’t get you home on time, your Dad will never let you out again this late in the day.”

Soon they were pedaling furiously toward town. The road was narrow, but there was little traffic, and they pretty much had it to themselves. By now they were ready to go home, fall into bed, and sleep from pure exhaustion.

“You girls ride on ahead, single file, and stay way to the side of the road. I’ll ride behind and watch for cars coming behind us. And be sure you turn your bike headlights on,” called Kent as they rode out onto the main road.

They were a silent trio as they pedaled furiously toward home. The twilight was fast waning and it wouldn’t be long until darkness would fall. It was the end of a perfect day, and all three were more tired than they realized. The only thought in each of their minds was just to get the lights of home in sight.

However, the “ perfect day” had yet one more surprise for them. A very unexpected one, and one which would change the direction of each of the three young lives forever.

Josh O’Conner, Kent Walters, Patsy and Penny Holt, and Eleanor Marlowe find themselves required to make choices between traditional beliefs and radical new trends in American life. The nation is in the throes of a depression, and there is a great divide among its people between the wealthy and the soup kitchen dependents. The youth of that generation find themselves searching for direction, and each must find his own way.

However, these young people have the advantage of godly families and biblical counsel. When disaster strikes, the Holt twins and Kent find that God is real and in everything. They find that He can be trusted with their very lives. Eleanor Marlowe, after a rebellious, unsatisfying search, finds a reason for living in carrying on the family tradition of service to those less fortunate than she. And Josh meets the girl of his dreams as he serves the Lord in counseling youth.

For those who were young in the thirties, this story will be a nostalgic journey. For young people to whom the thirties are the olden days, they will find that these young people are much like themselves. For everyone, the story will present anew the challenges of faith in our day.