Is It Really Just A Small World?

THERE ARE NO COINCIDENCES! 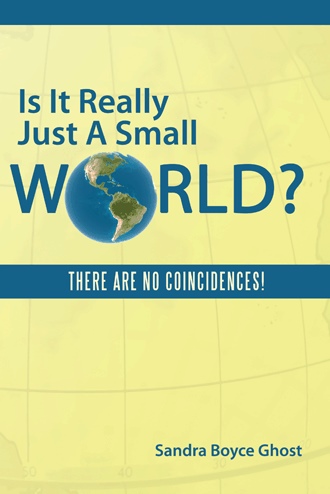 It was the final performance on the Jazz Concert printed program. Technicians abruptly killed the auditorium house and stage lights. In total darkness, Sandy slipped out of the wings to the microphone at center stage. Red, glowing exit lights were the only illumination -- the concert audience responded with a surprised hush.

On cue, at the sound of the first note, a small, pin spotlight centered on just her face alone. The face floated in the velvet of darkness, as she sang the verse a cappella and one chorus of Peggy Lee’s hit, “Fever”. The mic magnified the sound of her fingers snapping crisply in time to the music. A soft murmur of approval sifted toward her from the crowd.

At the top of the second verse, her voice was bolstered by a deep resonant acoustic bass that now joined in. They modulated up a half step to a new key that added bright, fresh interest. The pin spot broadened to frame head and shoulders.

Another verse--up another half step--drums now punctuated the sensuous rhythm, and the spotlight grew larger, glinting off the gold sequins on her dress, causing tiny pinwheels of flashing light to wink at the audience.

“Captain Smith and Pocahontas, had a very mad affair

When her Daddy tried to kill him

She said, Daddy-o don’t you dare

He gives me fever...

Keyboards now lent a solid foundation line; they modulated up another half-step. The spotlight expanded again as the snapping fingers of the audience resounded like thousands of crickets in the darkness, clicking in cadence.

“Fever! In the morning...fever all through the night”...

Up another half step, Sandy had counted on staging and modulation to build excitement in what could have been a monotonous song. She always leaned on staging to cover up what she considered to be her mediocre voice; however, the reaction of the crowd now seemed to build to a fever of its own.

Approval rolled across the footlights,  that now blazed into glaring multi-colored light. Five, gutsy saxophones began a swaggering, sexy riff in support of the melody.

And still up another half--the trombone section stood, slides gleaming as they added a full, rich bass line on the next chorus. The audience was standing too, clapping in time to the music.

On the final chorus, five trumpets began a wailing, brassy riff. Sandy wriggled sexily across the stage, mic in hand, wishing the moment would never end. The excitement was contagious; some stood on their seats.

“Chicks were born to give you fever

Be it Fahrenheit or Centigrade, they give you fever”...

She had planned a dramatic finish. On the last note, the stagehands again killed all the lights. The contrast of darkness and silence stunned the crowd-- she exited stage right, tripping over an instrument wire, and grabbed the green velvet stage curtains to keep from falling.

Simultaneously, a mental picture presented itself. She could vividly see herself in a sprawl of sequins and spraddled legs on the floor, when the technicians would hit the lighting switch again. I’m such a klutz, she told herself. My big moment, and I almost have a pratfall--typical of me!

There seemed to be no way she could reconcile that a fluke of fate had turned her from a frumpy housewife into a glamorous singer as though with a wave of a fairy godmother’s wand. Wiping beads of perspiration off her upper lip, she steadied herself with several deep breaths in anticipation of the curtain call.

As the house, stage and footlights blazed back on, the crowd began to whistle, applaud and cheer. The emcee walked to the microphone and announced, “You voted her Cleveland’s Jazz Vocalist of 1960...Sandy Ghost. Sandy, come out and take a bow. You’ve worked us to a fevered pitch--we love you!”

The tight gold dress dictated tiny steps, much like those of a geisha whose feet had been bound in childhood. It hindered a full bow, but Sandy threw kisses with both hands to the crowd, “I love you, too!” she breathed into the microphone.

She noticed even the recording technicians in the orchestra pit were applauding. There was to be a record of the live performance, which would later be produced for public sale. How could all this be happening to her, she wondered?

Now that she could see the audience, her eyes automatically swept the crowd for her husband, Bill. He hadn’t come tonight. She still couldn’t seem to perform well under his sarcastic scrutiny. There seemed to be an inner button she could press in the wings and become “Sandy Ghost, entertainer”, but when Bill was in the audience, or the children, that button was almost unreachable. She felt like “Sandy Ghost, housewife” just up there making a complete fool of herself. The warmth from the crowd felt almost tangible as she wrapped herself in the glow of their response and tiptoed off stage.

Chalky white paint peeled off the walls of the chilly backstage dressing room. Although a huge, rusty radiator snored loudly, the room was frigid and she hastily changed into a heavy, blue wool sweater and slacks. There was a shelf, covered with flowered oilcloth, that served as a dressing table, and she quickly creamed off the theatrical makeup, then reapplied a tamer shade of lipstick. False eyelashes lay on top of a plastic container looking like two ugly centipedes mating. The surroundings were sordid, but as Sandy looked in the mirror, they were transformed into grandeur by the excitement that still lingered in the air, much like ozone after a thunderstorm.

When two neighbors who live in Bucksnort, Tennessee unexpectedly meet in New York City, they usually say the same thing, “Well, it’s a small world!” This seems to be the phrase that always accompanies a remarkable coincidence. But what if it isn’t coincidence at all? What if these extreme happenings could be orchestrated by God, to get our attention, to further His plan for our lives, or as some kind of heavenly protection? Have doubts about that? Well, Is It Really Just A Small World? promises to show one “coincidence” after another, all laced together in the life of one woman with the love of a heavenly valentine.

The autobiography of Sandra Ghost reads like a page-turning soap opera when as a teen she tries to swim upstream in a troubled home life and uses marriage as an escape from the parental river of alcohol. Physical abuse ends this union and a second marriage promises all her dreams will come true, until she finds herself desperately trying to win her new husband’s approval to no avail. She feels planted in the country with the crops and a newborn baby, and tries to imitate the housewives on TV, submissively trying to just tie a starched apron around her troubled mind.

In a fluke of circumstances, Sandy is thrust into singing onstage. This occurrence blossoms into a surprising career as a nightclub entertainer with bookings all over the US and Canada, appearances on television, plus a recording contract. And this is when the miracles begin to happen...

So, fasten your spiritual seat belt, get prepared for the ups and downs of a heavenly roller coaster ride that will leave you breathless with what the world would deem to be remarkable “coincidences”.

(While this autobiography is told with humor and candor, it reflects solid and astonishing answers to prayer. When there are encounters with others whose stories of miracles also cross the path of the author, she has included affidavits by those involved to speak of the veracity of the episode.)

The catalyst that launched Sandra Ghost’s writing career was winning the Guideposts Magazine Writers’ Award in 1971. Subsequently, she has had four other books published, has been a newspaper columnist and editor, Vice President of a public mining company and currently Vice President of a local chapter of AGLOW INTERNATIONAL. She lives in Conneaut Lake, Pennsylvania with her noble German Shepherd dog, Kelly, and claims her greatest gifts in life are her children, four grandchildren and two greatgrandchildren. Yet, she claims she hasn’t decided what she wants to be when she grows up!