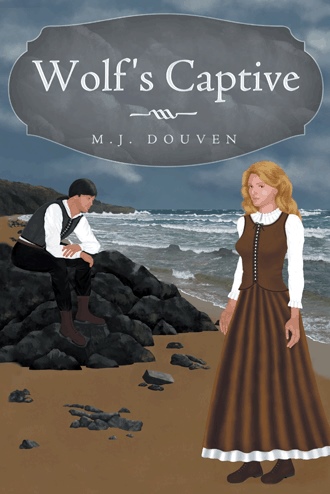 The next morning, Thyrias was up and dressed long before anyone else was awake. He had lain awake for what felt like hours, waiting for dawn to come. The sky was just getting light when Thyrias opened his door and slipped out. He hurried across the frozen courtyard toward the wolf-rider hall, watching his footing to keep from slipping on the ice. Threatening clouds loomed on the northern horizon, and he hoped that they would leave before it started to snow again. Thyrias knocked on the door of Rykír’s rooms. Rykír should be awake; he was usually an early riser. To his surprise, it took Rykír a few minutes to open the door. Rykír was still buttoning his shirt, but he waved Thyrias inside. He dropped back down on the edge of the bed to pull on his boots. His dark hair hung around his shoulders in sleep-tousled waves. He looked like he had just woken up. “Eager?” Rykír asked softly, after several minutes of silence. He stood up, strapping on his sword belt and thrusting a long hunting knife into his belt. Thyrias nodded. “So eager that I could not sleep. You know that I have looked forward to this day for a long time.” He shot his friend a curious glance. “I thought you would already be up.” Rykír raked his fingers hastily through his hair and tied it back with a leather strap, wolf-rider fashion. Thyrias looked on, half-envious. He had tried to tie his hair back, but it was still too short. Rykír snatched his fur cloak off its hook and fastened it with a brooch. “I did not expect to be sent out so soon,” he said. “We have not even been home a week.” “You mean that you are homesick while you are away?” Thyrias stared at Rykír. “Sometimes,” Rykír admitted. He glanced at Thyrias. “Sometimes I feel so tired. I know that some of the other men feel the same. Every time we come home to Sketha, we are only here for a few days, and then we are sent out again. I have not spent more than a week at home in four years.” Thyrias could not believe what he was hearing. Ever since he was thirteen, he had longed to take part in the raids that made the Korash the most feared on the northern seas. He would never regret the time spent at sea. Outside, doors slammed, and feet stamped past. It was time to go. Rykír led the way out. He and Thyrias walked together down to the harbor. Many of the people of Sketha had gathered at the harbor to see them off. The wolf-riders brought wealth and prosperity to Korashan, and they were heroes in the eyes of their people. Without the spoil the wolf-riders brought home from the raids, the Korash would be reliant on the few crops they could grow along the coast of their frigid land or on trade with other countries across the sea. The women of the palace had decorated the prow of Thyrias’ ship with branches of evergreen, as was the Korash custom when a prince set out on his first raid. The heady scent of pine and fir filled the air. King Melchias stood at the front of the crowd. He gripped his son by both arms and then hugged him. Thyrias had only been away from home on short trips. Now he would be away for several months at a time. “Make me proud,” Melchias whispered fiercely. “I will, father,” Thyrias said. “I promise.” Thyrias’ sister Maris was not there to say goodbye to her brother. Nothing could show her scorn for Thyrias more than her absence. Not that Thyrias really cared. He was in too much of a hurry to leave. To his surprise, Rissa came shyly up to him just as he was about to board the ship. The thick shawl wrapped around her head and shoulders made her look like the little girl he used to tease when they were children. He gave her a hasty kiss on the cheek and then bounded after Rykír. The rest of the wolf-boats were already waiting outside the harbor for the lead ship to join them. As soon as he and Thyrias were aboard, Rykír gave orders for the men to untie the ship from the quay. As soon as the rope was cut free, the sails billowed out in the rising wind, and they were off. Thyrias stood at the side of the ship, feeling the wind blowing in his hair as the ship slowly gained speed. The salt spray stung his face. Rykír stood beside him, sharing the moment. Only he knew how long Thyrias had waited for this day. When they joined the rest of the ships outside the harbor, Rykír turned to Thyrias. “Where do we go?” he asked quietly. Thyrias’ head whipped around, and he stared at his cousin. “Did my father give you no orders?” Rykír shook his head. “Your father told me that he wants you to learn to lead the men. I am to follow your orders.” The possibilities that opened to Thyrias left him breathless. They could go anywhere, from the tropical southern lands to the northern realms of Doradha and Rhonidian. He could go anywhere he wanted. Doradha was the closest to them, but Thyrias did not want something so simple. He wanted to go further away, where the pickings would be rich. On his first raid, he wanted to return to Korashan with a great prize. “Rhonidian,” he said slowly. “We sail for Rhonidian.”

He wanted to lead his men into battle. He wanted his deeds to be remembered, like those of his father and his grandfather before him. He wanted victory and fame—until, one day, he met a woman who challenged everything he believed in, a woman who made a difference. And his life was never the same.

M. J. Douven lives with her parents in rural Victoria, Australia, where she spends most of her time working on her next book. To learn more, visit her website at www.mjdouven.com