This Little Light of Mine

Letters to My Grandchildren 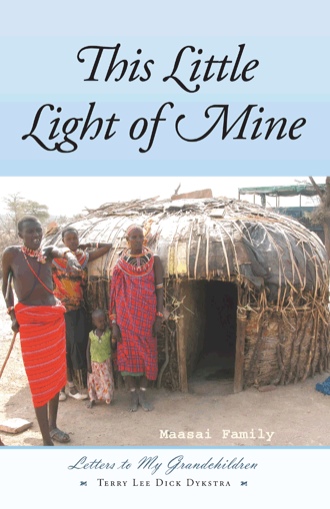 All of it happened. It was hard for author Terry Dykstra to believe. Yet if she could not believe it, she had her memoir to prove it to herself. She dreamed of becoming a missionary in Africa, and the dream came true.

Orphaned and vulnerable children were fed and educated. Grace rose up and walked. A university soared on the wings of eagles. Abused women fought back with political clout. A teenaged girl jumped over puddles of blood escaping ethnic violence. HIV/AIDS stalked the land.

Eager, bright, and beautiful Kenyan students became skilled and loving Christian pastors. Violence and crime and corruption were commonplace. Missionary friends were gunned down and killed. Yet the persistent light of the Christian faith remains a beacon of hope in Kenya.

The American and Scottish missionaries who arrived in Kikuyu one hundred years ago would be proud of the Kenyan Christians who continue to carry the torch. They clothe the naked, feed the hungry, bind up the wounds, and preach the good news to the poor.

Down through the ages, the work of Christians goes on from generation to generation, from continent to continent. The light shines in the darkness, and the darkness cannot overcome it.

Terry witnessed the Church in action in Kenya, and she was humbled and blessed.

Terry Lee Dick Dykstra served as a missionary in Kenya. It was a love affair that took courage and perseverance—a soulful journey she shares with clarity and passion with her six grandchildren. Retired, she and her husband, Lyle, live in Delaware.