A Resurrection to Immortality

The Resurrection, Our Only Hope of Life after Death 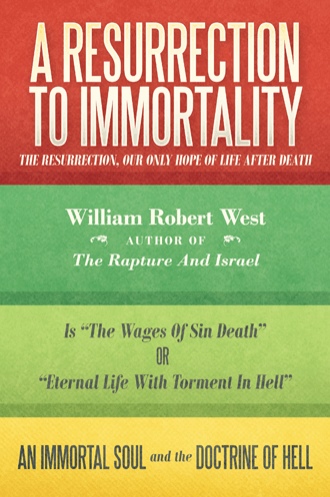 What does the Bible say about an immortal soul and/or spirit? Together soul and spirit are used almost 1,100 times in the King James Version, but not one time is immortal ever used in the same verse with either one. Immortal and immortality are in the Old Testament zero times, in the New Testament, immortal one time, immortality five times, all by Paul. What does he say?
1. "Now unto the King eternal, immortal" [1 Timothy 1:17].
2. Only God has immortality [1 Timothy 6:16].
3. Christ "abolished death and brought life and immortality to light through the gospel" [2 Timothy 1:10].
4. "To them (Christians) that...seek for glory and honor and immortality" [Romans 2:7].
5. "This mortal must put on immortality" [1 Corinthians 15:53] at the resurrection.
6. "This mortal shall have put on immortality" [1 Corinthians 15:54] after the resurrection.
Why are we to "seek for" immortality if we are born immortal? Why will we "put on immortality" if the only part of us that will ever be immortal has been immortal from birth (or before birth)? The fact that a person must "seek for...immortality" and immortality must be "put on" at the resurrection is conclusive proof that a person does not now have it. If Romans 2:7 and 1 Corinthians 15:53 teaches nothing more, it teaches that no part of a person now possess immortality. Not one passage in the Bible says anyone is now immortal, if no one is now immortal, no one can now have a soul that is immortal.
There are only two views that are commonly believed about what will happen to mankind after death. [One] That the soul of all will live forever and cannot die, the soul of the lost must exist somewhere for all the lost have eternal life and are not subject to the wages of sin which is death, or [Two] the wages of sin is death and the lost will die, they do not now have eternal life and never will.
[View one]. The belief that everyone has a soul in them that will live forever and cannot die, therefore, death is not the wages of sin. A person has something in them that cannot die, cannot ever be destroyed; All are born with eternal life and can never die. This view has two major divisions.
• Universalism: that all mankind has a "soul" that cannot ever die or be destroyed, everyone has something in them that will live forever but it will be saved. If this it (soul) is not saved in this lifetime it will be saved after death.
[View two]. The wages of sin is death; the lost will die the second death; those who do not belong to Christ will forever be destroyed after their judgment. Those who do not believe this view gave it the name "annihilation." This name is not in the Bible, but what it means is eternal destruction, nevertheless, I think it best not to call Bible teaching by a name not in the Bible.
Most Protestant Premillennialists believe the lost will be totally destroyed but there are three Premillennial views on how or where the lost will be destroyed.
1. Many Protestant Premillennialists believe that the destruction of the lost will be on this earth and the saved will forever live on this earth; no person will ever be in Heaven. Many believe the Valley of Gehenna will be restored and the lost will literally be burn to ashes in it.
2. Some Protestant Premillennialists believe that the saved will be with Christ in Heaven, not on earth after the thousand years, the second death will be the end of the lost, but they are not burned to ashes on this earth.
3. But then some Protestant Premillennialists believe the wages of sin is eternal life with torment for the soul that cannot die, which puts them in the camp of those that believe death is not the wages of sin.
If we have either a soul or a spirit that is now immortal and can never die or be dead, how could there be a resurrection of the dead? Do you believe in the resurrection of the dead? If yes, what do you believe will be resurrected? Will your dead body be raised from the dead or do you believe a soul that is not dead will be raised from the dead? When I first begin this study I was surprised and made to tremble at how few believed in the resurrection and how many there are that do not really know what they believe about it. Many believe some part of themselves will instantly be transited from this world to Heaven or Hell at death without a resurrection, before the resurrection and Judgment Day and before the second coming of Christ, but when asked what is the reason for the resurrection, they not only do not know but have never really thought about it. Death is looked at as being a doorway to life in another form, that death is not really death, and there is nowhere in their thoughts or in their faith for a resurrection for their theology says no one is really dead. The resurrection has been removed from the faith of many by today's theology that says some immortal part of a person will go to Heaven at the moment of death. But is there any life after death before the second coming of Christ and the resurrection of the dead? Paul said at the resurrection, "This mortal must put on immortality," but if we have a soul that is now immortal, then what is it that is now mortal that will put on immortality at the resurrection?

Life is the most important possession we have. Without it, there is nothing. Only by the resurrection at the second coming of Christ will anyone have life after death.

The author is a devoted Christian for more then 50 years, who puts God first in his life. He believes God word, that the Bible is God’s revelation to all people and it supplies us completely with all we need to live and worship as God wants us to. In this work, e points out some of the many ways the beliefs of some have set aside God’s word and are, “Teaching as their doctrines the precepts of men.” Matthew 15:9