Dealing with Our Fears When Letting Go Seems Impossible 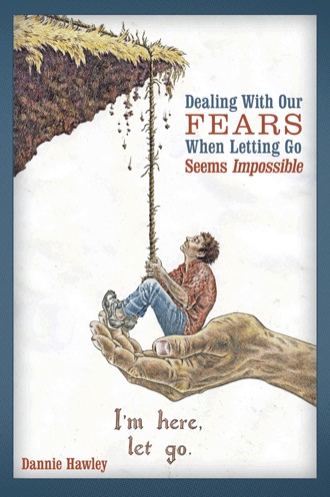 Rounding the corner of our L-shaped front porch, my senses were aware of two opposite emotions: 1. RELIEF that the men had actually come to finish the work on the short, wooden, anti-goat fence that now framed our village yard, hoping THIS year our young fruit trees and garden produce would be protected from the roaming goat population; and, 2. ANXIOUS ANTICIPATION over the tropical storm which was soon to come, based on the days of unbearable heat and humidity we had been having.


My thoughts were concentrated on the patients with RTC (return to clinic) appointments for that afternoon…what changes I would make in their treatment plans “if…”, etc….until I reached my destination. As soon as my hand touched the doorknob of our jungle latrine (now a “deluxe” model with the addition of a few rows of stacked bricks, topped with a wooden toilet seat brought from America!), all medical contemplations came to an abrupt halt. My brain switched into “preservation” mode, all senses alert to possible danger as the knob was turned and the door carefully opened. Next, I would gingerly slip my head into the room to check the periphery of the little 6’ X 8’ room before putting the rest of my body in. On occasion Mama Mamba liked to lay her eggs under the shipping container perched on cement pylons just next to the latrine. Often the newly hatched black mambas began their life of exploration by checking out our latrine! Before actually entering the room, one needed to listen for the rustle of leaves on either side, as well as for a “thud” that could signify that some frightened critter of any number of varieties was attempting to hide from whatever was about to enter the room.
Neither I nor the critter was prepared for what happened next! As I slowly leaned my head through the space made by the open door, I felt something drop down millimeters in front of my face! I jerked my head back and found I was looking straight into the eyes of a startled and rapidly rising green mamba! The speed with which three of his eight feet of beautiful green body had shot vertical was matched by my reflex to slam the door. His “thump” at the door indicated I had won this first round of the battle by only a fraction of a second. BUT, the deadly snake was now trapped in the little building. (August 1993)

One year later, hand gripping the metal doorknob, I prayed for the courage to turn it and open the latrine door. Last August one of the African workers had finished off my deadly, lightning fast opponent with a shovel and then had used it to bury the green mamba behind the little outhouse building. I was frozen with fear as the above scene played over and over in my mind. I was acutely aware that the odds had now shifted drastically in favor of any creature/opponent on the other side of that door. What had changed? Just two weeks prior to this, the fear of the darkness I had run from as a child, had enveloped me like a cloud I could not shake off. My greatest defensive weapon had been veiled by a bazillion layers of black curtain, through which not even the brilliant light of an African sun could penetrate. Though folks in the western world often think that the snakes and critters of the jungle are just roaming around in search of some poor, unsuspecting foreigner to bite, sting or just be stunned into a terrified paralysis, such is not the case. The poisonous snakes, scorpions and other natural inhabitants of the African jungle we called “home” were only aggressive in response to their own sense of danger. I had never really been in danger from our co-inhabitants because I was always very careful NEVER to give them cause to fear me. They ALWAYS had the right-of-way on any path and I never stood under the branch of a tree, until each branch of the tree within striking distance had been surveyed and found clear of snakes. I rarely left the worn path but when necessary, I made noise at all times so that they would be aware of my presence and reverse direction under the blanket of leaves and foliage that carpet the jungle floor. At any sudden movement of the ground cover, we all came to an immediate halt. But, now I was blind. The snake would not know I had no intention of setting my foot down near his head, that I was not challenging him for the right-of-way, because I could no longer see him before he saw or felt me. “Fear” threatened to “laminate” itself over my darkness. “God has not given me a spirit of fear,” I told myself, endlessly, these first few months, “But a spirit of power, of love and of a sound mind” (II. Tim.1:7 KJV) and that “sound mind” was smart enough to know that God had a plan to get me through this trial and the provision of grace sufficient for each day’s challenges. HE would teach me not to fear.


Could I LIVE the truth I believed about God in this primitive wilderness as a totally blind person? “With God NOTHING is impossible!” (Jeremiah 32:17; Matthew 19:26; Luke 1:37) I know that to grow, one must always be challenged passed one’s own ability—otherwise God’s help would not be needed; but, this challenge seemed like such a quantum leap that I wondered if God had chosen the wrong “jungle bunny” to walkthrough this one with Him! God was demonstrating a whole lot more confidence in my reaching out for His hand to help me learn to walk this path, than I ever had in myself. When my little hand squirmed to get free of his grasp, His loving grip tightened and my heart heard him say, “You can do it!” At times the road seems never-ending, but my anxiety is calmed by the sound of His voice and the feel of His grip--both of which are everlasting! Many years before this extreme trial in my life, a beautiful and lively Irish lass taught us a chorus which was always a favorite. NOW, I found great comfort in its words as I lived it! “I love the way my Beloved speaks to me and chases away my fears. He leads me by the paths of truth and keeps me ever near. He comforts me, He sets me free, He makes me to understand that every time I say ‘I can’t!’, he tells me that ‘I can’”! And, dear Reader, you can, too! You may not have black panthers sunning themselves next to your shower room or green mambas dropping into your latrine, and you may not have the physical challenges of blindness, but “fear” is such a powerful weapon to shatter our hopes and dreams, turning the positive to negative with lightning speed and even seek to destroy your very belief in a God Who loves you.


In these pages we will endeavor to share with you our experiences and the wonderful model God has taught us in ”dealing with our fears when letting go seems impossible”!

Life in the twenty-first century is fast-paced, loaded with busy schedules and looming deadlines, making it nearly impossible to keep up, let alone get ahead. With pressures and stresses injected into each day, we find ourselves riddled with insecurities. As Christians, we know full well that we are to “fret not,” but how in this world? Falling economies and soaring oil prices, wars popping up like flowers after the winter snows, and we are to “fret not”? Exactly!


Three and a half years into their service at this medical post, Dannie became totally blind and there was nothing that could be done. Dannie and Anne-Lise stayed to continue caring for the patients, trusting God to take care of them in this wild jungle environment.


Dealing with Our Fears when Letting Go Seems Impossible is liberally sprinkled with true stories from jungle life, serving to illustrate the lessons of the Lord in the area of fretting.


Do you find yourself fretting over:
• having enough faith?
• knowing God’s plan?
• waiting on God for an answer?
• trusting God?
• letting go of worries?


Contained within these pages are these lessons and a model applicable for any Christian who needs to find a way to cope in this stress-filled, high-tech world.

Dannie Hawley (AKA Darlene, Dar), a pediatric nurse practitioner, has served full time in the African mission field for more than twenty-six years. Since 2007, her work has included overall basic care of five dozen children as Project Director of the Samaritan House Children’s Center. Dannie lives in West Africa.