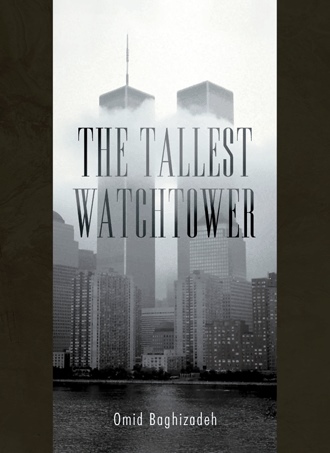 a dark cloud of a vast and huge bulk of dust covered the whole surface. Everybody was panicked; everyone was running away, but I did not move. I waited until the aftermath of this horrible event subsided and things became a little bit calm. Sirens of ambulances, fire trucks and police cars could be heard. Police and rescue workers were helping as much as they could; groaning and crying were aloud; I went towards a woman who was covered with dust, she had covered her mouth with her hands, she was terrified and was sitting on her knees. I reached her and held her arms with my hands, I tried to help her to stand, but I failed.

The Tallest Watchtower is a wakeup call for our sleeping sense of empathy and charity and a reminder not to forget those who are not among us but between us and our God. Their memory is always respected.

For Abolfazl Baghizadeh, this book is a commemoration for those who he believes should never be forgotten. He was born on November 11, 1965 in the city of Mashhad, and he loves reading romantic and suspenseful books.