Through It All IN THE HOLLOW OF HIS HAND 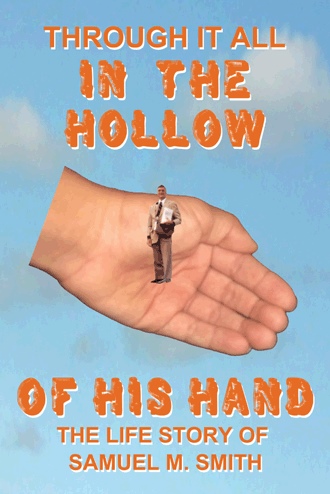 Tragedies are supposed to always happen to somebody else, not to you. Your own mother is not supposed to be found dead on her own bed in the middle of the night, the victim of violent murder, apparently by your own father; her husband of more than twenty-seven years.


The case was carried in the news media as a “copy-cat” of the famed Dr. Sam Sheppard murder case in Toledo, Ohio, which had happened two weeks previously. I was only about a month and a half past my eighteenth birthday and had spent one semester in Bible college preparing to become a missionary to the area in extreme southern Colombia near the border of Ecuador where I later learned the Auca Indians lived. Still later, that area became notorious because the first missionaries, including Jim Elliott, who visited the area were massacred.


On the evening of July 16, as we sat down to the table to eat supper, as we always called our evening meal, Mom said something which seemed unimportant at the time, and which remained forgotten for more than six years, but which then became quite important, but don’t let me get ahead of the story.

When I went to bed, I dropped off to sleep immediately because I had been awake later than usual. As a boy and young man, noises never bothered me once I got to sleep. Light, was a whole different story. I awakened easily to light. On this particular night, the early morning of July 17, 1955, I awoke with a start. Light from the little 15-watt bulb on the back porch streamed across my bed. In that instant, out of the corner of my eye, silhouetted in that light was my father, Meriwether Lewis Smith, in the doorway. Our two-foot wooden carpenters' level already on its downswing toward my head. Only the hand of God could have helped me as somehow I jerked my right knee up far enough to block that level. The red and purple bruise mark on my knee and slight limp from the injury stayed with me, for anyone to see, clear into December, long after Dad’s trial to while I was in Navy Bootcamp in Bainbridge, Maryland. What a shocking awakening!! Thank God, I was in the hollow of His hand!


In a second, Dad was on top of me, choking me with his powerful hands around my windpipe and Adam’s apple. But God has given me a strong throat and for all his great physical strength, Dad couldn’t cut off my wind. I knew that Mom was a light sleeper and she should already have been coming to investigate the noises in my room. Just to be sure, whether she was alright, I said something like, “Hey, Dad, Whatcha doing?” I knew she would surely come to my aid if she could. When she didn’t, I knew she was probably either dead or seriously injured and couldn’t.


Because of Dad’s infidelities to her and her refusal to give him the divorce which many of us knew he had asked for, even some of his nearest relatives sort of expected him to try to kill her.


I escaped from under him and dashed out the front door of my room, barefooted and in my long pajamas that I always wore. Down the length of the front porch, I raced and tried to hurriedly open the West front porch door. I had worked on the door lock previously and knew the locking mechanism was a very thin piece of metal. I thought that the force, I exerted as I desperately hit the lever style handle would be enough to bend that lock part and make my escape more quickly because I sensed Dad was right behind me. But it didn’t work. The lock held and the setscrew that held the lever handle on the square shaft gave way instead. I had to take the time to push the unlocking button down and then work with the now damaged lever, giving Dad time to catch me as I fumbled to get the door open, He caught me by my left wrist, but at the same instant, the door came open and in desperation I jerked loose, partly, I guess because my arm was slippery wet with sweat. I dashed out into the yard, ran for my life down our dirt driveway onto the macadam paved road and on to the house of our nearest neighbor with a telephone, Hardy Sermons.


I pounded on Hardy’s door, and yelled for him to open quick. Hardy opened the door and immediately went and got his gun while I called the Seminole County Sheriff's Department for them to call the Volusia County Sheriff’s Department.


When the deputies got there, we all went in and they parked their cars in the driveway near the porch. Both deputies walked up to the door with their hands on their guns. One of them, I’m not sure just which, knocked timidly on the door. “Mr. Smith, Mr. Smith,” he said. When there was no reply from inside the house, they came back to the car and asked me to go in ahead of them to turn on the lights while they kept me covered.


I agreed and with them right behind me, went in and turned on the light on the front porch, then in the livingroom, then the kitchen light, and the bathroom light before turning on the little 15 watt light on the back porch which had saved my life by being on when Dad attacked me, but which someone had turned off again after the attack on me.
In the light from that bulb, I could see through the open door that there were two forms in Mom and Dad’s bed so I went there directly, with the deputies right behind. Both Mom and Dad were in their usual places on the bed. As I reached to the ceiling light cord over the center of their bed, my knee touched the bed and Dad instantly started mumbling in what seemed to me to be a put-on sort of delirium, ”Did you get ‘em? Did they get away? Call Dr. Smith,” the latter a reference to a Doctor James Smith we had occasionally used in Sanford.


The first scene when the light came on was of blood. Lots of blood all over the bed and especially in a pool around both Mom’s and Dad’s left eyes. Each had a bleeding bruised spot maybe three-quarters of an inch long over each of their left eyes. I could see that Mom’s usually rosy complexion was already a pasty bluish color and in that instant, I sensed that she was dead. Still, hoping that she might be alive, though fearing the worst, I leaned forward and put the back of my left fingers over her heart. There was no beat; no rise and fall of her chest in breathing. “She’s gone,” I said matter-of-factly aloud to the deputies.


For the next little while, everything became blurred in my memory because I was in a state of shock. From that moment on, things happened really fast.

Through It All, IN THE HOLLOW OF HIS HAND

… the real-life story of dangers, great and small, that author Samuel M. Smith faced but through which he was protected by the hand of God.

A Bible college student on summer break in 1955, he was attacked by his father in the middle of the night. His mother was already killed and everyone including Samuel, believed his father had done it because he was being unfaithful. Why did he attack Samuel?

He has done short-term missionary work in the Philippines; T'bilisi, Republic of Georgia, and Moscow and St. Petersburg, Russia.

He has written over 100 Total Gospel tract titles — some translated in up to eleven languages.

Married to Virginia Quilates, from the Philippines, they have four sons, three of whom are preteen. Through it all, he has been in the hollow of God’s hand! It has been a truly exciting adventure learning to lean on Jesus and trust Him completely.

His mission, to publish the gospel, as Jesus Christ and His original Apostles would preach and teach today.

Samuel M. Smith’s first magazine article, Honey Bus, was published in September 1953. Graduated Famous Writers School Fiction Writing 1971. Major in Graphic Arts, Minor in Journalism  in 1976, was a News correspondent from 1984 to 1986. He is the Editor and Publisher of Up Way Publications gospel tracts and books since 1969, as well as the Author of: MARRIAGE: Delight or Disaster. © 1969, 1989 and To Be A Minister © 1989.

The name Followers of Jesus Christ Ministries was added as a "parent" ministry about the year 2000. Up Way Publications International has been the new name of Up Way Publications since 2007 because ore than seventy (79) pastors in seventeen (17) communicate and several refer to Sam as "Bishop."