Eugene Field Elementary The Remarkable True Story of One Woman’s Perseverance and Faith to Change the World, One Child at A Time. A Study in Community Schools. How To Turn A Low Performing School Into A Place of Academic Excellence. 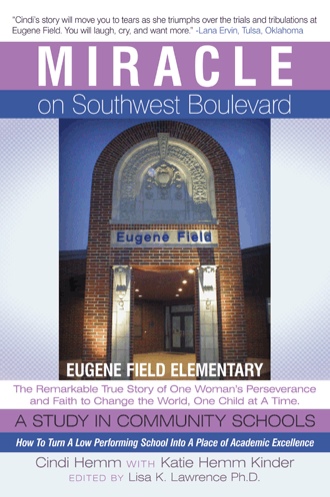 One particularly horrendous day I felt ready to throw in the towel, call up Tulsa Public Schools, and tell them I was quitting. I was going to take up selling auto parts or some other routine, methodical sort of work because this job was simply too hard! Already that morning I had called DHS to come take a little girl out of a terribly abusive home. I had to suspend two fourth grade boys for bringing a pocket knife and brass knuckles to school. I had to call the police because a father of one student was threatening a father of another student out in front of the building. Stacks of paperwork needed my attention, and I had a line of students waiting for discipline from me. And this was just a typical day at Eugene Field. There was never a “light work day.” Every single day, the duties of the job were extremely hard and demanding. I arrived at school before anyone got there, and I stayed well after everyone left. I worked until 10 p.m. some nights. I was working Saturdays and Sundays. I was tired. Emotionally and physically exhausted, I put my head down on my desk one evening around 9:30 p.m. Alone in my office, I began to cry. I was missing my family. I missed going home at 5 p.m., and cooking dinner, and watching television. I missed my son and his baseball games. My husband and I were like passing ships in the night. I hardly ever got to see my children and grandchildren. I needed to pack up and go home, but I still had so much work to be done before the next school day. Flailing and drowning in this new position of mine I literally got down on my knees on the office floor and prayed, “God, I need you and I need your help. I don’t want to be here anymore. You must have a plan. This is the worst place I’ve ever been!” Still sobbing, bargaining, and wagering with the Lord I said, “Help me. Send me the people of God! Tell me what you want from me. What do I do? Why am I here?” I prayed a long time that night, until I finally packed up and drove the 30 minutes home. Haggard and worn, I dragged myself inside and climbed into bed and finally fell asleep. About a month later, my tearful prayer and sobbing that night in my office forgotten, a couple of members from the First United Methodist Church in downtown Tulsa came walking into my office. It is a church so big that the number of active members reaches up into the thousands. This church had been involved with Eugene Field off and on before I became principal. On this momentous day, these church members sat down in front of me and let me know they wanted to increase their involvement with our school. In the back of my mind, I remembered my pleading with God that late Wednesday night, asking Him to please send me people. And. He. Did.

In the midst of poverty a leader emerges. A school in which people had given up hope. A prayer warrior and woman of faith steps into the position of principal at Eugene Field Elementary. Faced with unimaginable circumstances as the new administrator at Eugene Field, Cindi Hemm steps up to create the impossible, a community school in which children are learning and thriving. An outstanding school of excellence able to stand up to any school in the nation.

Eugene Field Elementary a place where hearts are mended, lives are touched, God is present, the hungry are fed, but it is never easy. Live this journey with Cindi that will change your heart and mind about the amazing miracles that can and will happen if you work hard and believe.

Ms. Cindi Hemm has been an educator in Tulsa Public Schools since 1982. She started her career with Tulsa as a speech pathologist and teacher. She has been a school administrator for the past 15 years. In her current position as principal of Eugene Field Elementary, Ms. Hemm has overseen a dramatic change at a high-minority, high-poverty school that serves the children from several public housing projects in Tulsa. Through her leadership, Eugene Field has gone from having the lowest academic scores in the district to among the highest in the district and the state. Eugene Field was recognized as the most improved school in the Tulsa district. The school was subsequently recognized as one of the most improved in the state of Oklahoma. Ms. Hemm’s contributions go well beyond the academic program at the school. She has spearheaded efforts to address health and nutrition needs for her students and their families. She is a bold champion for her school and students, and has personally raised untold funds for needed school projects. Ms. Hemm is an accomplished speaker, having presented at the National Title I Conference, National Staff Development Conference, the National Community Schools annual conference & Evans Newton Winter Symposium. Ms. Hemm won District Administrator of the Year for Tulsa Public Schools in 2008 and 2010. She is a graduate of Nathan Hale High School and The University of Arkansas. She and her husband, Jeff, reside in Tulsa, Oklahoma.