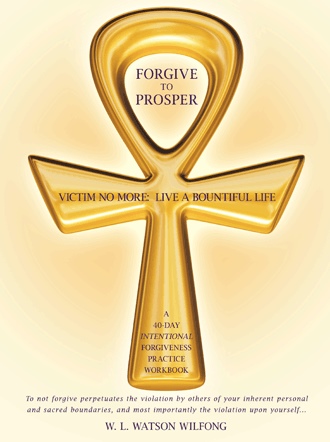 Does your heart ever feel heavy and you don't know why? Are you resistant to and or afraid to forgive?

Forgiveness is imperative. Forgiveness is the action that frees the soul of past transgressions. We are human and we will make missteps, blunders, horrendous actions and sometimes some actions are just wrong. It’s a fact of life. And, we must be able to own up to our missteps; learn from them and then move on. Holding onto guilt and grudges breed pain, resentment, and fear and a whole lot of anxiety; and these unhealthy emotions build up toxicity in the mind, body and spirit. We have power, intellect and a heart. We can use them as we want to; however, forgiveness is imperative to be free.

“Not rendering evil for evil, or railing for railing; but instead of these render blessings; for to this end you have been called; that you may inherit a blessing..” Holy Bible. I Peter 3:9

This 40 Day Intentional Forgiveness Practice, with the emphasis on Intentional, is designed for you to be an active participant in the practice of forgiveness to keep you mentally clear, emotionally clean, and totally healthy.

At the time of our birth, we are given inalienable rights – such as the Ten Commandments, the thou shalls and shall nots. These are sacred boundaries given to us as our birthright; and when they are violated, the violation makes clear what is and is not acceptable. We can feel the violation in our bones when a sacred boundary has been infringed upon. And, when we don’t own up to it or acknowledge the errors, we are allowing our sacred boundaries to be disrespected and violated, again and again and again … we make our selves, unimportant. So, it is absolutely necessary that we forgive so we can regain our self-respect, dignity, and self-worth … and from this, we shall prosper.

“We are not our actions but we can become our actions; and if they are not becoming to us or healthy for us, we can make another decision.” —W. L. Watson Wilfong, R.Sc.P.

We may ask ourselves, why am I not moving in the direction I want to go? Because there is an underlying influence that keeps us making decisions that are not for our highest good. When we intentionally look into the inner walls of our souls, we can have epiphanies that give us clarity on what is holding us back. We can then make different decisions that direct us on our path to our freeness; thus, we prosper.

To not forgive is the perpetuation of the violation of your inherent personal and
sacred boundaries by others and most importantly by yourself.

"To not forgive perpetuates the violation by others of your personal and sacred boundaries and most importantly the violation upon yourself." Our love for ourselves must be unwavering, unmoveable and unshakable. When we do not forgive, we weaken our self-love. Unforgiveness indicates that whatever we are holding onto is stronger, more important and more powerful than ourselves. This 40 Day Intentional Forgiveness Practice Workbook is designed for the reader to reclaim the true love of his/her self by delving into the daily exercises to release the maladies of the past thus reestablishing the personal and sacred boundaries of their core spiritual principles, values and personal power. The internal work required is intensive however, very much rewarding!!

Wyllene, born into a Catholic family in the United States, had the desire to live overseas and pursue a career in fashion design. She became pregnant at an early age and then knew that something in her soul was fundamentally altered. She became a seeker and searched to regain her desires of fashion design but was never on target. In 1992, she was licensed as a spiritual counselor through Agape International Spiritual Center and kept pursuing the freedom which was fundamentally altered as a teenager. Wyllene participated as team facilitator with the Process Oriented Psychology organization of Portland, Oregon which brings awareness to unconscious behavior patterns and how to heal and enrich personal and group relationships. Wyllene founded, Acts of Power, a transformational training organization that developed and implemented a program to assist African Americans with ways to unravel the systemic behavior of oppression.

She trained in Family Constellations, developed by Bert Hellinger, to learn and apply the experiential methods that detect the interruption of the natural soul process and brings to consciousness why an individual maybe stuck in achieving healthy relationships, healthy finances, healthy health, a satisfying career, and a solid spiritual foundation and total wellbeing. Wyllene realized that with all of the forums she participated in, forgiveness was the key for her. She became aware that she had a sound pact with Spirit/God and that the love of God is so unmovable, unwavering and unshakable that no matter what choices she made in the past that the love of God keeps her spirit in tact, always. She had to understand that even though God loved her, she had to have the same unwavering, unmovable and unshakeable love for herself; and by actively taking account of her past, getting resolve, shucking off the energy of old negative beliefs, making amends with herself, Wyllene became free; and she knows that to maintain the freeness, forgiveness is an ongoing practice. Thus, she writes this workbook of intentional forgiveness trusting that it will serve many who are in emotional bondage by resentment, blame, shame, guilt, self destructive behavior, and may uncover unidentifiable pain and anger.

Wyllene lives an eclectic lifestyle. She has a spiritual practice, is the administrator of a national trade association and an independent consultant to small businesses. Traveling, street bazaars, and celebrating with family and friends, listening to inspirational soul stirring music of various genres, watching comedy, eating fun and different foods; witnessing her clients having spiritual “ahas” and etheric healing are her passions.

Wyllene has a BS Degree in Social Science, lives in the Southern United States, is married, has two adult sons and is Mi Mi to Rashid, Janiya and Josiah and Mah!Lene to Brooklynne R.

Wyllene's motto is “Helping Others to Thrive”.