Where Do You Live?

A Journey into Truth and Freedom 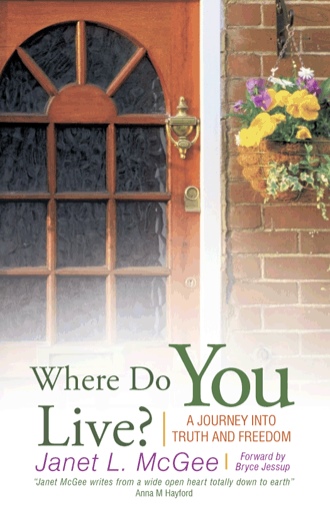 Your freedom is God’s will!

Have you ever seen a woman who was full of the Lord’s joy and secretly wished that you too could live life with that kind of confidence? Janet McGee set out with her husband, Scott, in 2005 to plant a church in Santa Maria, California. They were certain in the leading they felt from the Lord and believed they would watch Him quickly gather precious people together to form a beloved church family.

She learned that yes, this is God’s plan, but He had a much bigger one, and it was to capture her heart and change the whole way she lived. Through her story, you will learn that the freedom she found is available to everyone, even you. Although this account of Janet’s life is based from a pastor’s wife’s perspective, the truths learned and the freedom gained from Christ are available to anyone who loves the Lord. Read this warm, honest, and compelling glimpse into her life and learn from her example of how exploring God’s Word leads us into true freedom. Share in her discovery that when choosing to live life from His truths and promises, it becomes filled with peace and joy. Hidden in the midst of the stories of her adventure with God are precious insights of how God views us and how He encourages us to live. This book is a feast for your soul.

Janet McGee has been in ministry for over eighteen years, the last six years church-planting with her husband, Scott, in Santa Maria, California. Out of the struggles and challenges of planting a church, she has developed a passion for encouraging other women into deeper intimacy with Christ. She has written a newsletter for women in church-planting for Stadia New Church Strategies. She and Scott have been married for over thirty years and have two daughters, and a granddaughter.