The Prince Who Did Not Want To Be King 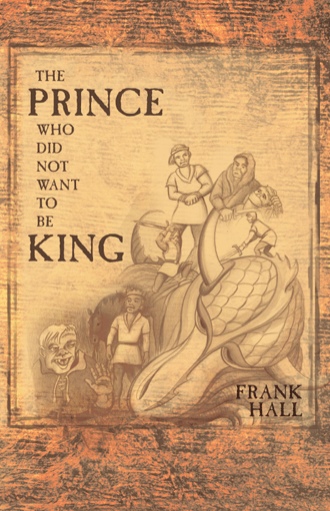 Prince Rupert threw his saddle blanket aside and jumped to his feet. Off to the south and part way up the hillside the mouth of the dragon’s den was clearly illuminated by flickering yellow, orange, and red flames. Huge masses of black and white smoke were billowing out of the cave and upward into the void of the night. The five tall aspens were sharply silhouetted against the awesome flames and ominous billows of smoke. Whinney was still whinnying softly. “My great grandmother’s grassysacks! Did you ever see anything like that?” “No, I never did. I never ever did!” Prince Rupert answered. As he stood there, transfixed with awe, the head of the dragon emerged from the cave, followed by his huge body. “He’s as big as a house!” Prince Rupert exclaimed. “No, he’s as big as two or three houses!” “Are you really planning to kill that Brobdingnagian critter with that itty bitty sword?” Prince Rupert shivered. “I was . . . but I think I’ve changed my mind.”

The Prince Who Did Not Want to Be King is a fairy tale about a king who wants to retire but can’t decide which of his four sons should succeed him. The three oldest boys initiate projects intended to impress their father, but the youngest son just wants to stay out of trouble and not do anything to bring shame upon his family or country. Instead, he wants to do something each day to make his country a better place to live and raise a family. The story is rich with thieves and villains, a dragon, a wise old man, a king, knights, princes, and a horse that seems to talk. Adults should read this with children aged 8 to 12 and discuss it with them to develop a biblical world view.