The Simple Book of Profound Truths

A Spiritual Guide for Skeptic and Believer Alike 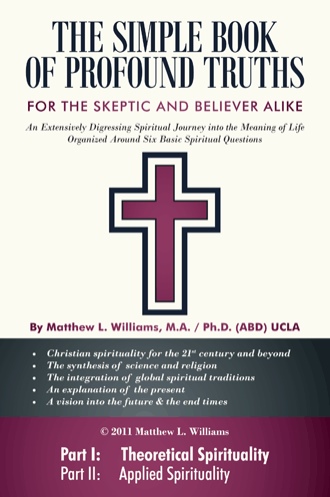 Yes—almost certainly. But before we give evidence for God’s existence, we must first understand the difficulties of proving anything. We live in a world where no true absolutes exist—including absolute certainty. The result is that no one can prove conclusively—that is, in a way that is 100% compelling and accepted by all—that God either exists or does not exist. We can only speak in terms of probability: God probably exists or God probably does not exist. No greater certainty than this is possible. (For the theological reasons why God doesn’t openly reveal himself to mankind, see chapter 2: Why Doesn’t God Just Reveal Himself?)
__________________________________________________________________________
We All Live in a World of Faith—Even Scientists, Atheists and Skeptics
It is not just people who believe in God who rely on faith, but every single person on earth. Our own limited knowledge—as well as certain (God-imposed) limits placed on what information can be known—combine to ensure that people never possess certain knowledge of anything. And without certain knowledge, we can only trust that certain things are probably true or probably not true. As a result, the basis for all our beliefs is faith.
Scientists have long recognized that absolute certainty in their field does not exist. They cautiously describe even very well-supported scientific beliefs only as ‘theories’ remembering how too many times in the past new discoveries overturned or qualified earlier supposed scientific ‘certainties’.
In addition, scientists routinely make certain assumptions—dare one say ‘leaps of faith’?—in the course of their work that cannot be conclusively proven true. Evolutionists, for example, assume that species that share large amounts of DNA are more closely related than species that share very little DNA. Otherwise, how would they have acquired so much similar DNA?
Almost certainly their assumption is correct. But one cannot be 100% certain of this. It is theoretically possible—if quite improbable—that great similarities of DNA could be due, for example, simply to random mutation in the same direction.
Even ‘mathematical certainty’—probably the highest level of certainty we have—falls short of absolute certainty. The math that describes very large objects in the universe (such as galaxies or stars) fails to accurately describe very small objects (on a subatomic level). We must await some future math that will be able to synthesize the two. Mathematicians themselves have pointed out ‘there is not one single universally accepted concept in mathematics’ and that ‘there are many conflicting ones’ (see the flap on Mathematics: The Loss of Certainty by Morris Kline (Barnes & Noble, Inc., 1980). Because of examples like this, all math—even the humble 2 + 2 = 4—must be recognized as tentative in nature and always subject to future revision. As a result, we can never be fully certain about even math.
If uncertainty exists in the hard sciences, engineering and mathematics, it goes without saying that it reigns supreme in the notoriously subjective and speculative fields of the humanities and social sciences. And in society in general, people do not win arguments with others by offering up absolute proofs that everyone then unquestionably accepts. People merely accept one person’s arguments as more likely to be true—in their opinion—than someone else’s ideas. There will be always be debate, doubt and divided opinions about politics, religion, sports, entertainment—and even whether the world around us actually exists and is not some great delusion of our senses.
Everything we think we know is merely things we accept on faith from our parents, teachers or society. We cannot fully verify it. Documents that we might use to try to ‘verify’ things might be forged, filled with mistakes or subject to multiple interpretations. What we think of as ‘proof’ of things is very flimsy in reality.
Everything we do each day is an act of faith. We go indoors each day on faith that roofs won’t collapse on us. We sit on chairs assuming they won’t collapse under us. We fly in planes, drive on the highway, go over bridges, accept food prepared by others, work a period of time before getting our first paycheck (and so forth)—all as acts of faith. There is nothing we do or know that is not an act of faith.
Besides our own human limitations when it comes to ever acquiring full knowledge, God has built uncertainty into the very fabric of the material world. Heisenberg’s famous Uncertainty Principle from quantum physics reveals that we cannot avoid uncertainty in the subatomic particles that make up our own bodies and everything else in the universe made of visible matter. If we seek to know the location of an electron swirling around the nucleus of an atom, we cannot also know its speed and direction. If we instead seek to know its speed and direction, we cannot also observe its location. We can have one piece of information or the other—but not both. Our knowledge is forever limited. Uncertainty will always exist.
___________________________________________________________________________
SMALL IRONY: While we seek absolute proof that God exists somewhere in heaven, we cannot even fully locate and understand the properties of the particles that make up our own bodies here on earth.
________________________________________________________________________________________________________________

Reinforcing this, mathematician Kurt Gödel’s Incompleteness Theorem dealt
mathematicians a blow by seeming to rule out the ability of mathematics to explain the complete scientific workings of the universe. Mathematics is a very useful tool—but has inherent limitations.
Just because uncertainty exists in the world doesn’t mean that we can never make accurate assumptions or that all our beliefs are unlikely to be true. It is just that we can never conclusively prove anything. But absolute certainty and absolute proof of things isn’t necessary for us to get by in life. All the amazing technology mankind has created from spaceships to computers to skyscrapers to automobiles, etc. is all based on information and ideas that we are ‘uncertain’ about.
The same is true when it comes to God. No one today will ever be able to demonstrate with absolute certainty that God exists. This is actually how God wants it to be. But just because you can’t be 100% certain God exists, doesn’t mean that there isn’t very good reason for believing that he does in fact exist. You aren’t actually 100% certain about any of the things in this world that you nevertheless personally feel quite sure are true.
The arguments that scientists make to prove the validity of their assertions are no higher or more credible than those which believers can make to prove the existence of God. The same high standard of argument which can prove any scientific, mathematical or logical principle can also be used to prove the existence of God. You don’t have to resort to just faith-based appeals that God exists. The evidence I am about to present for God’s existence is not faith-based: that is, it is not simply things I read in the Bible or heard from some fellow believer—though great truth can be found in both these sources.

This book is a revolutionary text for revolutionary spiritual times. Facing imminent global financial collapse and great adversity for the foreseeable future, people will need a powerful faith in God just to survive. But who can have great faith if they don’t know anything about God and how he works in our lives—or if he even exists?

God reveals spiritual knowledge to mankind not in an even, continuous flow, but in rare bursts or quantum leaps forward. The last such spiritual burst in Christianity occurred almost 2000 years ago, with the teachings of the New Testament. Since then, virtually no progress has been made in terms of spiritual insight into the Bible. Even worse, scholars today don’t understand very well God’s lessons from the last burst. That’s why you’ll find even prominent Christian teachers still debating such basic spiritual concepts as the following:

• Can non-Christians be saved?
• What is the role of science—and especially evolution—in relation to the Bible?
• What roles do free will and predestination play in our lives and salvation?

Unfortunately, while Christian spirituality has remained stuck in the past, mankind has pushed ahead into the twenty-first century. With the explosive growth of knowledge, science, and global communications, Christianity must improve the way it addresses people’s spiritual concerns or face irrelevance and eventual extinction.

This book represents a revolution in spiritual understanding that takes Christianity into the twenty-first century and beyond. It is the latest burst of spiritual insight—2000 years in coming. Mankind’s oldest and most vexing spiritual questions are answered here in full accord with logic, science, and reason. In addition, the reader will find new insights into understanding the Bible, living a spiritual life, and—for the first time ever—a new vision of Bible prophecy and the end of the world. There is no book like this.

Matthew Williams has a BA in classics from the University of Michigan at Ann Arbor and an MA and PhD (ABD) from UCLA. He has taught Greek, Latin, and Greco-Roman civilization at UCLA. He currently teaches Latin at Mountain Lakes High School in Mountain Lakes, New Jersey.