Let the rains Stop! Let the clouds Clear! Open this cover and let the Sunshine in! Here is, 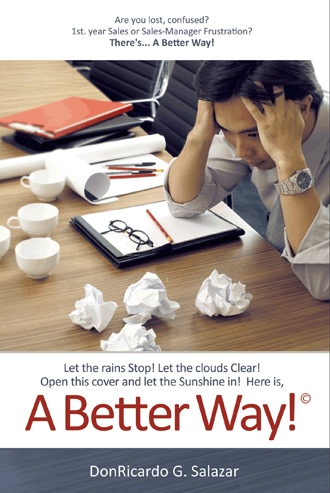 Author, DonRicardo G. Salazar, took the advice of Ruth Stafford Peale, when she said," Find a need and fill it!" Well I found a need of Global capacity! With the downward spiraling economy in this country appearing to be unstoppable, I knew the first casualties would be in the Small Business Community Sector of this great Country. Well, I refused to stand on the sidelines and watch this debacle occur! I spent two years due diligence and writing the salient points that were appropriate and yet be powerful enough to, even slow down this progressive cancer to our economy. I believe, between the covers of this book, A Better Way, are the most efficient and effective Sales Action-Models to alter the negative direction of the present group dynamics strangle-hold on our Small Business Community. It is targeting the two areas I believe are capable of turning this Titanic around. How? By focusing on "Planting the seeds" of strong, pro-active, time proven methods at the "Newbees", in our Sales personnel. That is specifically aimed at the New Sales-Reps and the newly appointed, Sales Managers. They will not only benefit by the fruits of their labor, but also assist the Owners of our Small Businesses to recoup their losses much faster. Then, they will become Seasoned Sales Personnel, who will then Mentor the following "Newbees", or rather teaching them how to fish! I chose the "New" personnel to focus upon, because they are typically already charged-up with the excitement of their new position within the Industry of their Passion. So now it's left up to them, read this book, attend my Orientation-Seminars and ..., Carpe Diem! Seize the Day!

As of January 2010, Morgan Franklin Associates, Sales Management Consultants, AKA, MFA Consultants, made a commitment to donate a percentage of the profits, from the sale of our book, "A Better Way?", toward helping the Small Business Community make their come back.

We want this book to be more than a ray of hope but rather a hand-up, for all Small Businesses to use toward regaining their previous position. The position they held since our founding Fore-Fathers built it; known as, the Back-bone of the entire U.S. Economy, and we want it back, now!

My background over the past thirty years includes having worked in a corp/exec capacity for five, multi-billion dollar manufacturing corporations in the World of Sales and the Art of Selling. My PASSION, was always in the World of Sales. Specifically Mentoring & Training Direct &Independent-Agents, new to the Art of Selling! I've Mentored over 1,600 Sales-Reps. Several have gone on to become Entrepreneurs, Captains of Industry, or found their true passion at a specific level, perhaps as Senior Vice President of Sales; not aspiring to higher levels in the Corporate structure, as myself; in my last position as Corporate Executive, Senior Vice President. I spent seven years with that organization taking it from $800,000 gross annual sales in the western region as their Sales Manager up to $10,500,000 within (18) months. I was then promoted to Western Regional Vice President of Sales; during which I took the western region annual gross sales from $10,500,000 up to $22,800,000 within the next (12) months, representing 55% of the entire International gross sales. I was then promoted to Corporate Executive Vice President of the Company. I was directly responsible for (5) Vice-Presidents, 200 Sales Reps & over 600 Distributors. Shortly after I took total gross sales to $52 million. I was offered a promotion to President/CEO. I did'nt take it, I felt it required compromising my high standards of Morals & Ethics. Therefore, I was asked to leave the Company. I was happy to do so. When I left the Company it was at $62 million a year. In the year 2000 I started up my own Consulting Co. , "Morgan Franklin Associates", a Sales Management Consulting firm, creating business plans for Start-up companies, Expansion-Divisions & Crisis Management. I traveled to 40 states, Canada, Mexico, Japan, China, Germany & Italy. After seeing the terrible declining economy, I realized who would be hit the hardest first, the Small Business Community. I felt compelled to help, or assist that segment of the Business Community any way I could. In 2008 I decided to write this book. Spending two years of due-diligence, I deduced the quickest way to help, was to focus on the area that could help them recoup their losses, in the shortest amount of time. That is to "plant" the seeds in the newest most excited people in sales; the new Sales-Rep and recently promoted Sales-Managers. But both had to feel Passionate about Sales & never exposed to professional education in structured basic sales strategic planning the founding Fore-Fathers did not create the Backbone of this great country, only to see it crash and burn! I read an article written by an independent survey company stating, in 2000 there were 65% of the workforce that were Happy in their job. In 2010 there were only 43% happy in their jobs. The writing was on the wall, lack of Passion in the workforce! I've committed a percentage of the profits of this book to be given to the Small Business Community, where I could see the most need. Next, knowing about 90% of the Sales-Reps I met, had degrees in Education or Psychology, but definitely not in the World of Sales! So, I spent the last two years writing the most basic foundation of Structured-Sales Models, designed novice Sales-Reps & newly promoted Sales-Managers. Between my Book & a two day Orientation-Seminar, I hope to assist the Small Business Community regain their title as the Backbone of the U.S. Economy. Let those owners walk with pride again, in this very competitive global economy. Born: San Francisco, CA moved to Santa Clara before it became the heart of Silicon Valley. Formal study:Math-Bus. Architecture; Home Studied 25yrs through Harvard School of Business Mngmt, Prof & Dean,.Michael J. Porter & Dr. Deming's TQM+JIT Mngmt. concepts, the Art of War by Sun Tzu, Dr. Joshua Leibman's Peace of Mind,Harvard: Jack Welch-GE; David Schultz-IBM; Dr. Woods-Industrial Psychology & it's Social Function: Never Stop Self-Education!