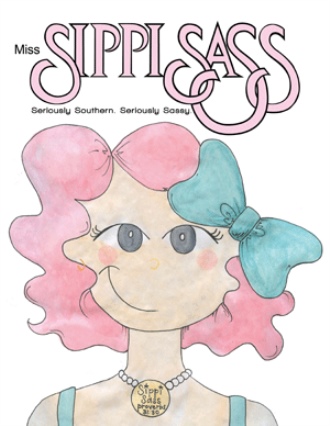 Another day at school, Mary Parker approached Sippi and she was madder than a wet hen. “Gracie wouldn’t let me have a turn on the swings,” Mary Parker touted. “Well, for heaven’s sakes!” Sippi replied as she strided over to the swings. There was Gracie, Maren and Sara Hardy laughing and just a swinging. Sippi asked the girls politely, “Hey Y’all, may we please have a turn on the swings?” “No,” the girls replied in unison as they continued to swing. Sippi glanced at Mary Parker, who shot her an “I told you so” look. Determined, Sippi asked again, “Gracie, Mary Parker and I would really like to swing. Would y’all mind sharin' for a bit?” “Yes, we would mind,” Gracie, Maren and Sara Hardy snickered. Well now, Sippi was plum put-out. Her friends’ rudeness surprised her, because everyone knows that Southerners are known for their hospitality. Clearly, these three needed a reminder of their raisin’ (and I don’t mean the fruit), Sippi thought to herself.

Southern and sassy, Miss Sippi Sass endears herself to the young girls of the world in this educational yet entertaining first in a series of books in which she demonstrates to children and adults alike a faith-based life in today's world. Sippi uses practical, everyday situations to teach kindness, respect, and a love for others based on biblical principles. Funny and charming, Sippi Sass is sensible, honest, and Southern as sweet tea. She uses her Southern hospitality along with her confident charm to persuade others to her way of thinking, which is almost always Bible-based. Living a faith-based life in a world where everything seems topsy-turvy often seems impossible, but Sippi teaches us through modern parables that it is not only possible but enjoyable to live for the Lord.

Several years ago, the Lord told Cortney Thomas Hood to “Write a book”. Sippi Sass is the result of many months of seeking God and answered prayer. As a Mississippi native, Cortney has a love and an understanding of the complexities and misunderstandings of Southern culture. She delighted in the creation of Sippi Sass, in hopes of sharing her two great loves, Mississippi culture and the Lord.

Cortney has been married to her husband, Ed, for 10 years and they have three children: Will, 8, JohnThomas, 7, and Kate,4. They live in Benton, Arkansas where Cortney serves as Worship and Women’s Minister at their church. She also has her own Speech-Language Pathology business.