The Aramaic Gospel Before Matthew, Mark, Luke, and John 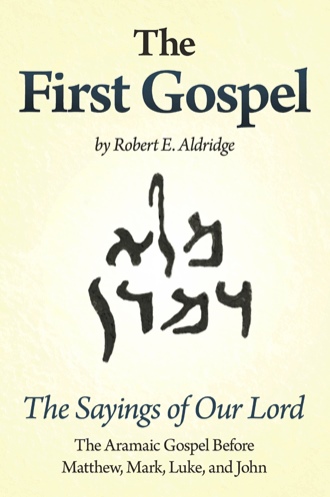 FROM CHAPTER 14 -- “AMONG THE HERETICAL WRITINGS”
2. The Gelasian Decree
At this same time (the early Middle Ages), both the Catholic Church and the Orthodox Church made lists of heretical groups and rejected writings. The first was issued by the head of the Catholic Church, Gelasius I, who served as pope from 492 to 496 AD. The split between the Catholic and Orthodox Churches began in 485. Pope Gelasius made reconciliation very difficult by claiming that supreme authority lay with the Roman see (based on Matt. 16:18, “thou art Peter, and upon this rock I will build My church...”), not collectively with the four other patriarchates (Jerusalem, Antioch, Alexandria, and Constantinople), and by doing this in a very high-handed manner.
In 494 AD Gelasius issued what is known as the Gelasian Decree, a catalogue of the authentic writings of the Church Fathers, which also included lists of apocryphal books and banned heretical works. (The Decree’s full title is Decretum de libris recipiendis et non recipiendis, “the Decree on Accepted Books and Books not Accepted.”) Some scholars believe that additional material was added to the Decree about 520 AD. The Gelasian Decree is often considered the forerunner of the Index of Prohibited Books, which the Catholic Church issued between 1559 and 1948.
Section V of the decree (Item notitia librorum apocryphorum) contains a long list of rejected writings, 96 in all. Most of these truly were heretical writings, but some were orthodox writings from the early Church that were simply no longer used. One or two had once stood on the fringe of the New Testament, such the Shepherd of Hermas and the Two Ways (given in a re-worked version). Also listed is a certain “Historia Eusebii Pamphili” -- this is, Eusebius’s Church History -- which was included for politico-religious reasons. (See Appendix E, item 40.)
The first item on the list is the Travels of Peter (Itinerarium Apostoli Petri, whose Greek title was Periodoi Petrou). It was used by the Ebionites, and was the main source document for the pseudo-Clementine Homilies. Item 6 on the list is given in some manuscripts as Evangelium nomine Mathiae (“the Gospel by the name of Mathias”), and in other manuscripts as Evangelium nomine Matthaei (“the Gospel by the name of Matthew”). This is probably The Sayings of Our Lord, which was now officially declared an apocryphal writing (liber apocryphus). That the Evangelium nomine Mathiae/Matthaei referred to Matthew rather than Mathias is shown by its high place in the list, near Peter, whereas a writing associated with the late and little-known Mathias would have been given a place near the bottom of the list.
Further down in Section V is a long list of individuals who taught various heresies and founded heretical groups. Among those listed are “Ebion” and “Cerinthus.” At the end of this list, the decree declares these individuals and their followers to be “under anathemas, damned for eternity with an unbreakable chain” (“sub anathematis insolubili vinculo in aeturnum confitemur esse damnata”). This clearly states that the Ebionites and other Jewish Christians were considered heretics.

4. Stichometry of Nicephorus
The third work listing rejected writings was the Stichometry of Nicephorus. It was produced during the iconoclastic controversy -- the bitter dispute over whether it was permissible to venerate icons (images of saints, etc.) that rocked the Greek Orthodox Church from 725 to 842 AD. The iconoclasts went around smashing icons in Greek Orthodox churches. Nicephorus Constantinopolis was the Patriarch of Constantinople (the head of the Greek Orthodox Church) from 806 to 815 AD. And he was the champion of the orthodox view (which supported the veneration of icons) during the second iconoclastic contest, which began in 814. He was removed from office when the iconoclasts temporarily gained the upper hand in 815.
The Stichometry of Nicephorus was produced by Nicephorus about 810 AD. Since Nicephorus was the head of the Greek Orthodox Church, his writing may be considered an official statement by the Orthodox Church. The Stichometry lists the books of the Bible and gives a line-count for each of them. (A stichos is a line of writing.) The Stichometry divides the Scriptural writings into four groups: the Old Testament, the New Testament, some Septuagint books, and four New Testament apocrypha (antilegontai). The New Testament apocrypha consist of the Apocalypse of John, the Apocalypse of Peter, the Epistle of Barnabas, and the Gospel according to the Hebrews. The last-named book is probably The Sayings of Our Lord. Note that The Stichometry gives the length of the Gospel according to the Hebrews as 2200 stichoi. Since The Stichometry gives the lengths of all the books of the Bible, it may be possible to get from this an idea of how long The Sayings of Our Lord was. The Stichometry gives the length of the Gospel of Mark as 2000 stichoi; Matthew as 2500 stichoi; Luke as 2600 stichoi; and John as 2300 stichoi. This means that the Gospel according to the Hebrews (which probably means The Sayings of Our Lord) was longer than the Gospel of Mark but shorter than that of John. It was about the same length as any of the four canonical gospels, not substantially shorter than them.

This book is about the first gospel, the Aramaic gospel written before the New Testament. The literary source for the gospels of “Matthew, Mark, and Luke.” From 40 to 65 AD it was the Church’s only written account of Jesus. Many early Christian writers spoke about it, but modern scholars have not investigated what they said. It is a forgotten writing. Almost “a lost book of the Bible.” What did it say?

Robert Aldridge is an expert in early Christian literature and has written a number of articles in the field, including “The Lost Ending of the Didache.” Studying the Didache gave him a greater understanding of the early Church and led him to search for other early Christian writings. Mr. Aldridge lives in Los Angeles. www.thefirstgospel.com