Wanderings in the Wilderness

The Journey Back to Eden 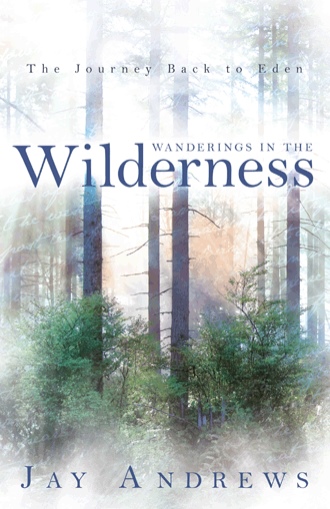 The early church knew a lot about wandering in the wilderness. Many lives were lost and the struggle was bitter. From the blood of martyrs thousands of believers heard the Gospel message and were born again.

Today, it feels the same minus the martyrs. The storms are severe. Jobs are lost, the body grows ill, good people turn out to be evil, friends fail, enemies win, ideals disappoint, faith grows weary, and the zeal to serve is lost.

Rather than destroy God’s fi eld and fruit, Satan’s persecution of the early church fueled the spread of God’s word of hope. Unlike us, they were not complacent and satisfi ed with the advance of the Gospel. Hated and hunted, murdered for what they believed they pressed on. This attack of the saints drove them to the most distant parts of the world.

Today, the attack is different. Christians are accepted, tolerated, and even welcomed. Church is the socially acceptable thing to do . . . just don’t take it too seriously. Instead of an outright assault, Satan has lulled us into believing that there is plenty of time. In the attack on the Christians of the Twenty-first century, he has spread the rumor that God is dead. Science has been elevated above the authority of the Bible in an attempt to make God irrelevant. He has spread the lie that the answer to all our needs can be found inside ourselves—that everybody is a part of God. We have been tempted to rationalize Scripture so that it fi ts everybody’s whims.

The most deadly lie of all is a truth. “God is real; the Bible is real,” says the deceptive spirit, “but there is plenty of time to do as you please and then make peace at the end of your pleasure.”

That crafty deception has cost the church its zeal. It is the downfall of our society today. That lie has taken prayer out of our schools. It is causing the destruction of the family. That fabrication is the reason people are starving in our streets and bursting out of our prisons. The urgency of the Good News no longer burns in the hearts of Christians as it once did. Too often we are better at making excuses than we are at rightly handling the Word of God. We seek our pleasure first and fit the work of the kingdom in whenever it’s convenient.

We cannot seem to get out of the business-as-usual routine enough to become vulnerable. The storms of life prevent us from reaching all the people we should. We are content with the mediocre Christian existence. We fail to seek the abundant life that Jesus promises so we fall short of it.

We are satisfied to survive the storms with as little damage as possible. We falter under the load without looking for opportunities to walk on the water in the midst of the gale. For us the wilderness has become the place to reside rather than part of the journey to the land of God’s promise.

Jesus never made an excuse. He never went on extended vacations. He was there when it was going well. He was there caring for people when life’s storms were more severe than you and I can imagine. In times of fatigue and diffi culty, when we would seek solitude and rest, Jesus ministered to the need without counting the cost.

Jesus never ran away from a chance to help people who struggled in the wilderness. Jesus showed people the Father’s love. He revealed to us the way back to Paradise. He wants you and me to do the same. Where would we be if Jesus took His mission only as seriously as we take ours?

Supper was over. The sounds of conversation and laughter were replaced with the rattle and clang of supper dishes being put away. The night air was calm and cool. His brothers were preparing the family room so everyone could sleep. His sisters were helping the little ones get cleaned up for bed. He eased out to be alone for awhile. The night into which He walked was as dark as the world into which He was going.

In the room across the open courtyard, it was darker still. The smell of freshly cut wood lingered. The last of the customers had been by earlier to pick up the new table. Shadows danced on the newly cleaned workbench as light from the lamp He carried flickered into the room. The wood shop was just as He had left it. Everything had a place, and there was a place for everything. All of the tools were put away, and the fl oor had been neatly swept. The shop was ready for someone else to assume the work.

It was time to move on to His real calling.

He had known for quite a long time that this day would arrive. He gazed at the beam in the corner. One day it would be the header holding up the rafters in someone’s house. Th ere was another crossbeam in His future.

Hanging above the bench was the plane used to shave away layers of wood to obtain a good fit. Beyond the safety of these walls, He would find layer after layer of hatred and hypocrisy needing to be stripped away.

He picked up the hammer and sat on the stool Joseph had made. The handle was worn and smooth; His hands, now rough and calloused, had made it that way. It fit His hands, and He used it well. He could not begin to count the pegs His hammer had driven. There would be another hammer; it would not drive pegs—it would drive Roman spikes.

He lifted His head as if He heard something. It did not come from his family inside the house but from a distance. Voices crying out for help, voices of anguish and despair, old voices, young voices, strong voices, weak voices, my voice, your voice. Then He knew. This is what He was here for. There would be no turning back.

A soft and gentle hand trembled as it touched the rough robe covering His strong shoulders. He stood and turned. His mother was crying. She knew too. Her face reflected the fear of the future. He looked into her eyes as if to say, “I’m sorry.” Somehow, she knew it would be all right. She squeezed His hands and smiled. She understood that He must go. There was a call to answer. Neither of them said anything. Mary clung to her son as only a mother can. Jesus embraced this child of God who had raised Him so well. He held her close for a long, long time as only God can. Her sobs of fear became tears of joy as her pain and grief turned to worship and adoration….

Life is frustratingly unfair. Jobs are lost, the body grows ill, good people turn out to be evil, friends fail, enemies win, ideals disappoint, and faith grows weak. It is so discouraging to see people who never have a difficulty and never suffer. Always on the mountaintop, they leave many feeling inadequate wondering, "What's wrong with me?" The storms of life threaten to overwhelm us with a hurricane's relentless fury.
If you have ever lost your zeal to serve, ever felt so tired you wanted to quit, ever doubted why you should keep trying, then you know the paralyzing aftermath of life's storms that conceal the joy for which God created you. You know the humdrum existence to which this world has succumbed. It seems like you are just drifting along in an unfamiliar wilderness. Wandering is tolerable; it requires minimal effort and it&rsquo;s relatively comfortable. You offend no one and you keep your distance. You are lost but you are moving, so why add anything more to your plate? Busy and preoccupied, you go through the motions day after day after exhausting day.
Jesus changes all that. He is faithful, walking where you have walked. He cries your tears. He understands your regret. He smiles at every effort and heals your wounds, rebuking the raging storms of life. He has called to you as you hid in the bushes, ashamed of your nakedness. He searches for you when you were lost, alone, and shivering in the dark. He rescues you from those in the world who would devour you. He can restore your zeal and your desire to serve.
In these accounts, you will experience the joy, the fear, the delight, and especially the wonder of walking with Jesus on your journey back to Paradise.

Jay Andrews, pastor of Snowdoun UMC is passionate about the Gospel of Jesus Christ, his wife Jennifer, their six children and six grandchildren. He loves mission work at home, regionally, and abroad leading, serving, and supporting teams in Montgomery, Nashville, New Orleans, Costa Rica, Ecuador, Haiti, Dominica, Eleuthera, Zambia, and Brazil. He seeks to develop disciples through interaction with Scripture.