Remembering Others in Personal Prayer 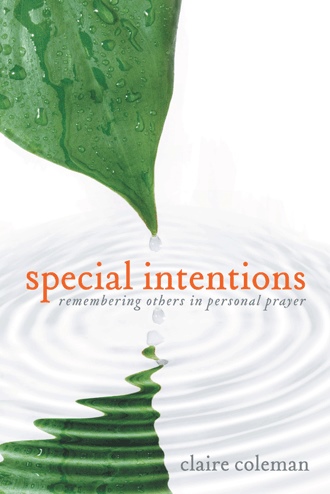 “I’ll keep you in my thoughts and prayers.”

I have written and spoken those words thousands of times. Usually, they were said (or written) to people dealing with life-challenging moments. Each time I said or wrote those words, I meant it.  However, I didn’t always follow up diligently with the promised prayers on every occasion. Some things, like my nephew’s tour of duty in Iraq and the critically ill grandchild of a friend, stayed embedded in my mind and I offered a prayer --quick, silent and heartfelt -- each time I thought of them. However, there were many other times when the person or circumstances failed to create the mental Post-it for my mind and I never said the prayers.  When I finally did remember, I felt horrible about neglecting the promise and forgetting what was very important to someone else.

On the afternoon of September 11, 2001, I made a list of family and friends who were missing after the terrorist attacks. The list included Richard, my husband’s cousin, a passenger on Flight 93; Frank, a father and husband, I had known for years from town; and Michael, another young husband and dad, who worked on one of the upper floors of the north tower of the World Trade Center.  There were fourteen names in all. I wrote them down because I knew I needed to pray for each one and I couldn’t take the chance of forgetting any one of them. By the end of the day, hope had faded for some but not for all. I returned to the list, but, eventually, I learned that not one person on the list survived.

For whatever reason, I couldn’t bring myself to tear up the list or throw it out.  Instead, I placed it on my night table.  Just seeing that list of names brought to mind all the surviving spouses, children, parents, and siblings of those who were lost.  I knew these survivors would carry heartaches and grief for the rest of their lives. I knew I could not change what happened on September 11, and the only thing I felt I had the power to do was pray for the survivors and ask God to comfort those people in their great need.  Each time I looked at the list I offered a silent prayer for the families.

In 2004, I was there when my brother retired from the Navy after thirty years of active and reserve service.  Near the end of the retirement ceremony, an officer read “The Watch,” a poem written by William Whiting in 1860.

In part it says:

He stood the watch so that we,

our families, and our fellow countrymen could sleep soundly in safety,

each and every night,

knowing that a sailor stood the watch.

As soon as I heard these words, I couldn’t help but think of the nights that my brother stood the watch on the bridge of his ship and later in the Naval Command Center at the Pentagon. But then, my thoughts went to the thousands of sailors on ships around the world, the scores of people in the Pentagon, the soldiers on active duty in Iraq and Afghanistan, and the men and women of the Air Force, Coast Guard, and Homeland Security who “stand the watch” every night as I sleep.  These people, and so many others, who protect our country, cities, and towns every day and night, deserve my thanks and gratitude.  For me, the best way to do so is to offer a prayer for these wonderful men and women.

These two events coupled with a personal history of including other intentions in my private prayers, led me to consider writing a book which asked for prayers for people who carry great burdens or who are selfless in their commitments.  I believe that praying is a universal act and a fuller, more developed prayer life involves sincere consideration of the needs of others. The act of reflecting on someone else’s life increases our empathy for other people. That reflection may serve to slow our rush to judgments about others; slow our hair trigger impatience with a waiter, a cashier, or the voice on the other end of the phone. We may, in time, come to realize that no one journeys through life unscathed and that every soul carries some sorrow or sadness. We may come to realize that every one of us could use a caring thought or a dedicated prayer.

I know that people help other people every day.  Instinctively, we grab our phones and call 9-1-1 to report a fire or a car accident. We sign up by the thousands to walk for breast cancer, juvenile diabetes and Alzheimer’s. We send money to the Red Cross for victims of floods, tornadoes and earthquakes. If you are a person with that instinct to help, with that concern for others and with that empathic heart, it is easy to take those qualities and combine it with a prayer. Then, after calling 9-1-1 to report a fire, you say a prayer for the family whose home is being destroyed by the fire. After you “walk for the cure,” you meditate on the life of one woman whose life is changed today when she is diagnosed with cancer.

Think of Special Intentions as a book of reminders to continue your sense of caring for others into the realm of prayer. It is like the string around your finger, the rubber band on your wrist or the shocking pink Post-it note on your bathroom mirror.  When you read a page, you are reminded to do something important, as each page presents the reader with an individual meditation for a prayer. The concept behind Special Intentions is simple:

for someone other than yourself.

I suggest that you select only one page each time you open Special Intentions. Select a reading that speaks to you and take time to quietly reflect on the words and the life it describes. The deeper you meditate on the life described, the easier the words of prayer will flow from your heart. Your initial emotional response to the “person” on the page is your first prayer.  The most fervent prayer rises from the most sensitive place in your heart. It is empathy. It is compassion. It is gratitude.

Although written for readers who pray regularly and believe in prayer as central to their faith, this book can be used easily by anyone who has never prayed in this way before.  All that is required is an interest in adding this dimension to your prayer life and a willingness to devote time to it.  It also is a great book for people involved in prayer groups or prayer circles, who combine their voices and commit to the power of communal prayer.  You can literally be on “the same page” with a group, praying for the same person. It can be used if you pray once a day, once a week, or once in awhile.

There are no books exactly like Special Intentions. There are many books about prayer that focus on your own problems and needs. This is a book that asks you to read about one of two hundred plus people, reflect on his or her life and offer a silent, heartfelt prayer for the needs of that person. It is a book that will help you in your journey towards a more fully developed prayer life, one that is aware and sympathetic to the needs of others. I sincerely hope you find a personal connection to Special Intentions.

“Special Intentions reminds us of the importance of not simply praying for what we need, but for what others need.  Jesus taught us to ask God for our daily bread, but he also asked us to love one another.  Commending our friends and families (and co-workers, neighbors, acquaintances and even those who bother us) to the care of God is a key aspect of that love, and an important element of the Christian tradition.

“Claire Coleman's sensitive new work will help readers to more fully enter into this rich stream of the spiritual life.”

—James Martin S.J, author of My Life with the Saints

“If you've ever offered up a simple ‘God help him’ at the sight of someone less fortunate, then this book will resonate with your innate sense that prayers have power. Claire Coleman offers a graceful, easy way to benefit others with her beautifully written portraits of those in need. Take her advice, say a prayer for a stranger and make the world a better place.”

“While Special Intentions is a beautiful meditative book for the person alone in prayer before God, it likely also will be will be an inspiration for those in prayer groups, and friends who come together to talk about their life’s journeys.”

“Prayer is a personal experience, but sometimes we need a little reminder. Claire Coleman's Special Intentions is the perfect book to keep close at hand and close to the heart to reference, to inspire, and to share with others.”

“[The] listings of special intentions are so global and yet personal, so ordinary and yet profound.”

—Sr. Joan Noreen, OLME, co-founder and director of Our Lady’s Missionaries of the Eucharist

“Ms. Coleman reminds us that every one of us is, for very different reasons, in need of prayers.… Her ability to lead us to pray for someone we suddenly notice, think about, and then care about—someone who we don’t even know — is truly a gift.

Claire Coleman drew upon her life experiences for Special Intentions.  Facing the daily challenges of marriage and raising children, she found herself relying on her faith-based education and personal study of prayer for inspiration. A resident of New Jersey, she teaches writing at the college level.