Discover God’s Generosity to You in Christ 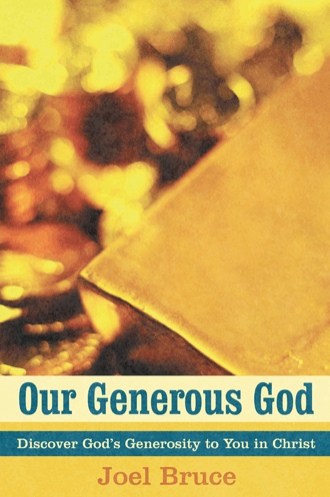 Many of us grew up with a great dad. He was a role model for you, and loved you greatly. He might have been an influential person, or somebody who never lived in the limelight. But, he was always there for you and taught you how to grow up and become a strong man or woman. If that is true, then you were given a great gift. But, whether you grew up with a good father, or someone who wasn’t good at all, none of our fathers could ever compare with our Heavenly Father. He is so much better than any human father ever could be. And He is your Father now through Christ.

Your Father in heaven is the greatest Father ever. In the first place, He is far wealthier than any human father, even if your father is a billionaire. As the Lord of creation, our Father owns “the cattle on a thousand hills” (Psalm 50:10). In other words, God owns everything we see, and even things we can’t see, because He created it. He owns it all as the Lord of creation. And this is the same Father who has adopted you into His Family. That is how great God’s gift of adoption is. We have a great God as our Father because we have been adopted. There is nothing in life—no physical, emotional, or spiritual need—that God cannot meet. He is the Lord of everything that exists, and He is your Father through adoption.

Second, God your Father has promised to take care of you. Most human fathers try their best to provide for their kids. Many fathers work two or three jobs to put food on the table. But, your Father can take care of your needs like no human father could. Since He owns it all, there is nothing you will ever need in life that He can’t provide. If you live long enough, you will see plenty of ups and down in the economy. But, God your Father never has a down economy. He never has to worry about financial problems because it’s His money anyway. So, you will never face a need that God can’t help you through. He is your Father and He is good.

In Matthew 6:9, Jesus taught us to pray, “Our Father in heaven.” As you read His prayer in Matthew 6, often called the Lord’s Prayer, you find a model for how to pray. When He was on earth, it made sense for Jesus to pray to the Father. He had a close relationship with the Father that you and I could only dream of. For example, in John 10:30, Jesus said, “I and the Father are one.” He knew God in such an intimate way because they are both Persons in the Trinity. Therefore, you would expect them to have a close relationship expressed in an intimate prayer life.

But here’s the thing that’s amazing to me: through adoption, the same Father to whom Jesus prayed is now our Father. We can never experience the same relationship that Christ has with the Father. And yet, we can still approach Him as Father. Today, you can address God as your “Father in heaven” because that is who He is. God has adopted you into His Family, and you have received access to the Father. Everyone adopted in Christ can call on God as Father and He will hear you. What an incredible gift we have to talk to our Father in heaven through prayer.

When He prayed, Jesus had a relationship with the Father where they could talk about anything at anytime. But, here’s our reality, and it is incredible. Now that we have been adopted, we can approach God the Father like Jesus did. We can talk to the Father, no matter where we are, because God is our Father through Christ.

You are invited to come to God as Father because you have been adopted. And the pathway to the Father is the same for all of us. In God’s family, there are no tiers or levels; there are no “super Christians” in the kingdom of God. Instead, you and I have the same access to the Father as every other believer. Whether you’ve been a Christ follower one day or sixty years, you can come before the Father in prayer the same as anybody else. To pray with your Father, you don’t have to go through a bunch of hoops; you don’t have to fill out forms, and meet with a committee. If you are in Christ, you have met the only requirement God has for you: membership in His Family.

In the Lord’s Prayer, Jesus talked to His “Father in heaven.” Today, we can talk to our “Father in heaven,” too. And what a great Father He is. One Bible scholar writes, “As Father, God is concerned for the needs of his children; as the One in heaven, he is all-powerful.” When you pray to your heavenly Father, you are talking to Someone who cares about every need in your life. He is so compassionate and merciful to you. But, amazingly, your Father not only cares for your needs, but He has the power to meet them. Philippians 4:19 says, “And my God will supply every need of yours according to his riches in glory in Christ Jesus.” God will meet your needs in Christ. What an awesome Father you have.

Relating to Your Father

God your Father loves you so much that He wants to have a great relationship with you. 2 Corinthians 6:18 says,

“And I will be a father to you, and you shall be sons and daughters to me, says the Lord Almighty."

God is a father “to” us. Your Father in heaven knows every detail of your life, including every secret you have, and He still wants to have a close relationship with you. God the Father is committed to have a growing relationship with you daily, and He has done everything He can to make that possible. Now, we have to take steps in our lives so it will become a reality. You can be close to God because He is your Father, and He invites you to draw close to Him throughout the day. And, in your relationship with the Father, He will be faithful to you like no human father ever could be. He is your Father today, tomorrow, and forever.

Verse 18 also says, “And you shall be sons and daughters to me.” In the same way that He is a Father to us, now we are children to Him. While we gain God as our Father, He gains us as His sons and daughters. He adopts us, but He receives us into His family, as His very own children. Here’s the fact: God wants a relationship with you much more than you want one with Him. Your Father wants you to have a healthy relationship with Him where you are close to Him. He wants you to come to Him with any need or problem in your life. But He also wants you to share your whole life with Him, and not just come to Him during a crisis. God your Father wants much more than to be your last resort. He wants you to talk with Him in prayer about everything. You are very dear to Him.

Each of us in Christ can call God the Father MY Father. He is not only the Father of everyone in Christ, but He is also your personal Father as well. The Bible has a lot to say about the Father, and it’s important for us to know exactly Who the Father is. As we look closer at our relationship with the Father, you might be tempted to compare God the Father to your earthly father. We’ll look at that a little later. But, for now, I think it’s important to remember that the Father is so much more than we often consider Him to be. God your Father is great and awesome, and He wants you to know about Him.

2 Corinthians 8:9 says, “Yet for your sake [Christ] became poor, so that you by his poverty might become rich.” But what does that mean? What does it mean that we have “become rich” through Christ? In Our Generous God, author Joel Bruce explores how God has made us rich in Christ and demonstrates how generous God has been to us through Him. Our God has abundantly blessed His children. If you are in Christ, you are truly rich, because God has lavished His gifts on you.

Throughout the book, you’ll discover the five gifts you receive as a follower of Christ: salvation, adoption, spiritual family, position as an heir, and an inheritance. Any one of those gifts alone would be incredibly valuable, but we are given all five gifts when we receive Christ. And each of those gifts is yours, free of charge. You receive them when you place your faith in Christ. The gifts we have are much more valuable than any material possession we could own. Our gifts from God are priceless and eternal.

Many Christ followers go through life thinking they are poor. Or they keep hoping for the day when they will become rich. But as you’ll discover in Our Generous God, your Father in heaven has already made you far richer in things that matter. In fact, He has generously given to you because you are His child and He loves you. Our God has given us so much in Christ.

When you read Our Generous God, you’ll come away with a greater appreciation for who God is. Your Father is incredibly generous to you, because His generosity is an expression of His very nature. And you have received so much from Him because He is generous.

Joel Bruce has served on staff in six churches since 1989. He has degrees from Westminster Theological Seminary (ThM) and Columbia International University (MDiv). His passion is helping people reach their full potential in Christ. Joel lives in Seneca, South Carolina, with his wife, Lorraine, and three children.