If God Wants Me Well, Why Am I Sick? 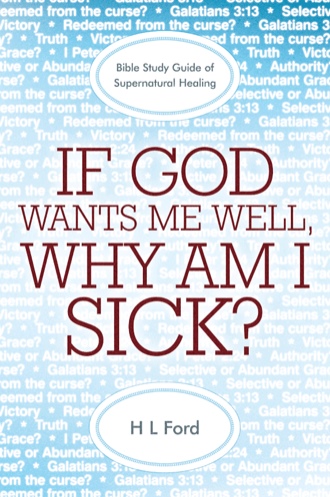 A Journey into the Supernatural

“Three-year-old Lucky Yolla had just been diagnosed with a disease that would require a bone marrow transplant. Three weeks prior to this bad news, Lucky’s father, John, had been hit with a devastating personal crisis. The double blows left him reeling.

“On a crisp fall Arizona morning in 1997, I was led by the Holy Spirit to stop by John’s office in Havasu. We went outside, had a short conversation, and this street-tough man of men bowed his head and accepted Jesus Christ as his Savior.

“Last week, Lucky celebrated his seventeenth Birthday, never had a bone marrow transplant, and is one of our city’s walking miracles, a gift of the Father’s love.”

Durmond’s story sends a thrill of hope to anyone who needs a miracle of healing from heaven.

I first met Durmond one summer as he sat on a park bench praying for the community of Saddlebrooke, Missouri. He speaks of God’s abundant grace. He prays for the sick. He believes. And the sick get well.

It is for Durmond. As a prison chaplain and minister, he has seen countless people receive God’s miraculous healing touch over the years.

Since the days of the apostles, believers have experienced God’s gift of supernatural healing, yet healing is not always simple, no matter how strongly a person believes.

Puzzling inconsistencies raise many questions. Questions which seem to have no answers. Questions like the following:

You believed that Jesus is the same Healer today as yesterday?

You believed beyond a shadow of doubt that healing of the physical body is God’s will for you?

You believed Jesus bore all your sicknesses as well as your sins when He hung on the cross?

What if, while truly believing the above, you had an illness and prayed with all the faith in your heart, and yet disease symptoms remained?

Would you be confused? Would you keep on praying? Beg and plead with God to change His mind and heal you? Get angry with God? Give up? Decide it must not be God’s will? That maybe He is testing your faith?

If you’ve ever struggled with such questions, you are not alone.

After years of skirting around the very questions listed above, I found I could no longer ignore them and began seeking the Lord for understanding, believing He is a rewarder of them that diligently seek Him.

I want readers to know, right at the beginning, this book is not about telling a sick person he has no faith, because everyone has a measure of faith according to Romans 12:3.

Rather, it is about a set of tools gleaned from victorious believers—tools (actually weapons of our warfare) for the sick to wield in their own good fight of faith for healing.

It is about encouragement and overcoming.

It is about victory.

Selective grace is the view that God sends sickness as judgment, or a trial to challenge a believer’s faith, or perhaps to humble him for some prideful (or other) sin. A sick person may be selected to receive God’s healing grace after he repents or is humbled. Faith is not emphasized. In fact, a good fight of faith is almost impossible with this view. People depend on God’s sovereignty and leave it all up to Him, rather than take a faith-stand against the disease. If symptoms remain after prayer, the assumption is that God does not wish to heal. Emphasis is on the person to somehow become worthy enough to earn healing.

Abundant grace is the view that healing is provided in the atonement as part of God’s redemptive plan. In this view, God does not send sickness; Satan does. He is the oppressor who enters by deceit. Persistent faith is possible because it is the devil people are resisting—not God. They don’t have to beg God to change His mind and heal them. They do have to stand in faith, resist the devil, and maintain confidence until healing is manifest. Healing can be sudden or gradual, and may even take a long period of time.  Emphasis is on Jesus, and the blessing already earned by His obedience.

It is not my intent to open a heated debate on doctrinal issues. I am well aware that anyone can pull verses, string them together, and formulate a doctrine. My purpose is for people to pray the Spirit of Truth rightly divides the word, opens their understanding, and reveals which tools they need in order to set them free from anything that hinders body, soul, and spirit.

Because I was battling my own pain, I prayed that prayer, and in November of 2009, the Holy Spirit began to deal with me regarding the selective or abundant-grace views of healing. I wavered between these views while the Lord brought people to my attention over the next several months. Among them, a teenage boy who declared faith in God’s word, got out of bed, and walked. A severely injured young pilot, the sole survivor of a plane crash, who determined to fly again although there was no hope for recovery. A woman who fought breast cancer for an entire year with only the word of God.

All received divine healing. Some waged an astonishing fight of faith for months, or even years. Others simply asked and received. Significantly, not one of them ever doubted God’s will was to heal them.

I wanted to know how these people got healed. Where did they get such confidence? Weren’t Christians supposed to suffer? How could they be so certain God wanted them well before healing came? Could I also believe He wanted me well in spite of a lingering painful condition?

And, If God wanted me we well, why was I suffering?

I decided to examine, record, and report these healing stories, comparing them with the gospel accounts.

During the entire year I worked on this book, I awoke each morning with a prompting from the Holy Spirit, an insight, or a scripture verse echoing in my mind. I was seeking, and finding answers.

I found literally hundreds of documented supernatural healings. Those which are not verifiable, I have not included. I had to omit one story of a modern-day resurrection from the dead, because I could not find the necessary documentation, even though I believe it to be absolutely true. I have chosen only those reports from trustworthy people with whom I have personal acquaintance and those from books released by respected publishing houses.

What I learned has been a journey into the supernatural.

As a journalist, I was investigating.

As a believer I was drawing near to God.

I have found many encouraging answers.

Not all the answers, however I am still learning.

Better yet, I am overcoming.

Best of all, I believe the reader will too.

A paralyzed youth declares his faith, gets out of bed, and walks.


A woman battles breast cancer with only her faith in God and recovers.

While a reporter explores these and many other supernatural healings, she discovers not one person ever doubted it was God’s will to heal.

Ford asked the universal questions while exploring the scriptures in support of these miracles. Before she completed the book, she took hold of truth and experienced her own healing from a painful condition she had suffered for more than twenty years.

Here is a set of tools—weapons of warfare—gleaned from victorious believers; these are tools you can wield as you develop your own faith for healing.

The study questions are insightful, thought provoking, and faith building.

God truly rewards those who diligently seek Him. He promises that if you seek, you shall find. This book is for those who seek, knock, and ask until they find the victory.

H L F ORD is a veteran reporter, speaker, author, and three-times First Place Winner of regional and national writing contests. She has been a women’s Bible study group leader for more than thirty years and is a lifelong student of the Bible.