A Prenuptial Rite of Passage for 9/11 Terrorists 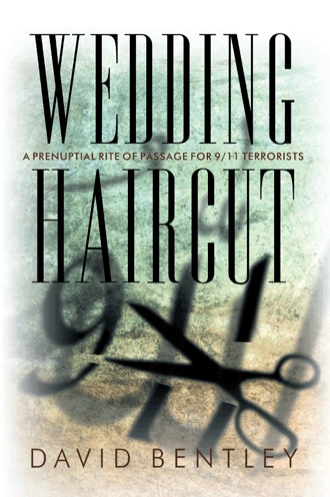 This book is about two intended weddings. A Saudi seeking Jesus tells his story covering the years 1999 to 2002 and ends with a haircut as part of his Arabic prenuptial traditions. Osman observes his roommate’s rehearsals for a very different wedding where the ritual haircut precedes martyrdom leading to carnal heavenly rewards. The hero is skeptical of this roommate’s belief where sensuality is mixed with fiery warnings against anyone daring to leave Islam. His San Diego based employer, “Uncle” Khaliil, a 1980’s Afghan munitions dealer, does little to restrain his power over his 27 year old protégé, especially interfering with Osman’s romance with Marie, his Mexicana sweetheart.

San Diego provides the glamorous seaside locations where the homemade mosque and community college scenes take place but these balmy images are often interrupted by Tijuana border crises. Other borders are in Amman, Jordan, where Osman lands on 9/11 while holding an illegal passport. He is further victimized by this disastrous terror attack on Manhattan during a Sinbad-the-Sailor flight to California where the rapturous Marie awaits him.

From benign hocus pocus untruths to outright deceptions, this novel features a litany of human failings. However, for Muslims and Christians, the “testing” of the Prophet of God, Abraham, becomes a model for sacred trusts. The Bible and Quran record a Father’s offering of his Son upon an altar as a symbol of the similarity and the disparity of the two holy books. Several citations from the Biblical and Quranic texts touch upon some gritty issues like Osman’s circumcision when he was 13 (Genesis 17:25, Quran 37:102); a delay based upon his mother’s vow for pre-1967 Jerusalem.

Marie’s effervescent kiss will ultimately revive Osman from a death by drowning, during which he hears Jesus speaking, prepping him for his wedding as a newly washed, hairless babe.

This is David Bentley’s third book on non-violent interactions between Christians and Muslims. He now resides in Southern California in is his work place for advocacy of Muslims seeking asylum based on International Religious Rights documents. Bentley and his family previously lived and ministered in churches in Jordan and Iran.