The Brother Up Next 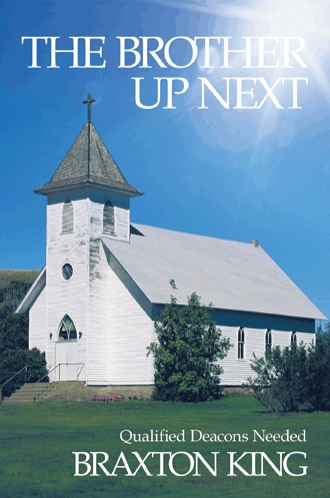 Author Braxton King has put together basic fundamental guidelines for a church in the process of making an earthly decision for the office of deacon.

King points out very vividly that there are divine requirements to be followed by the person seeking this office, along with the church requirements, before ordination can be conducted.

The men who must fill the shoes of deacon must be able to stand at a time when the rising tide of secularism is smashing in the walls of the church. They have inherited this responsibility because it is through lack of responsibility and trust in God that the church lays in grave decline and demise of spiritual obedience.

King has observed that the church has wallowed in fragments of Christian clichés and paraphernalia, causing people who look for answers at church to wonder through life with little meaning and fulfillment. The Bible message that they hear in many churches from men is so watered down that it has almost no relevance to what people face in real life.

The Brother Up Next seeks to turn the men of the church to the motive of being obedient to God’s word.

p>Braxton King is the author of four books: The Blackest of Times, Prosperity in the Building, Call of the Locust, and The Brother Up Next. He has a bachelor of science degree in organizational management from Paul Quinn College, an associate’s degree in arts and science from Mountain View College, and a diploma in Christian education from D. Edwin Johnson Institute, all in Dallas, Texas.