Did you receive the Holy Spirit when you believed? (Acts 19:2) 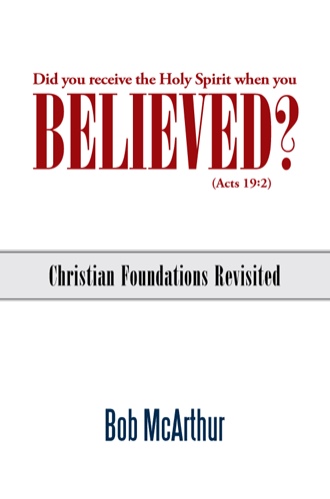 The Big Question/Setting the Stage

For three years Jesus walked the land of Palestine proclaiming that the kingdom of God had come. He declared Himself to be the Messiah, healed the blind and the leper, raised a widow’s son from his coffin and Lazarus from the tomb. He forgave sin as easily as He healed the sick. He declared Himself to be a King but not of this world, but another realm. He amazed the multitudes. He spoke with authority as though He needed no one else to authenticate His words. Sinners loved Him, religious leaders despised Him. He fooled the brightest with their own words and associated with the outcast. He gathered some disciples, chose twelve in particular and three more closely. He said He was the way, the truth, and the life and the only way to God was through Him. He came that men might have life. And yet He came to die – which made no sense to His followers, who were thrown into despair and fear when He did die. His purpose, of course, was beyond what they could understand. He wanted to pass Himself on to many, and the only way to do that was to leave this world – a prospect which made no earthly sense at all to His disciples. Resurrection, though, brought new hope and new understanding, and yet His followers still didn’t get it, even after Jesus spent forty days in resurrection life instructing them. The Kingdom of God, they wanted to know, was it to be restored when they were to receive the promise of the Holy Spirit? They were still looking for a political victory. The kingdom not of this world was neither fully grasped nor understood.


Indeed, the promise of the Holy Spirit was much needed as One who could bring clarity and understanding to the events that had just occurred – to Jesus’ death and resurrection, and really to His entire life and ministry. So,


When the day of Pentecost had come, they were all together in one place. And suddenly there came from heaven a noise like a violent rushing wind, and it filled the whole house where they were sitting. And there appeared to them tongues as of fire distributing themselves, and they rested on each one of them. And they were all filled with the Holy Spirit and began to speak with other tongues, as the Spirit was giving them utterance. (Acts 2:1-4)

The followers of Jesus were now equipped to bring proclamation and power to a dying, unregenerate world. Their eyes were now opened in a new way to that kingdom of another realm. The promise of the Father had been fulfilled and the Church was birthed in spectacular fashion leaving observers bewildered in amazement.

But how do we view this momentous event? Is it closely personal or just another note in history of the church’s beginnings, having no real impact on our lives other than a nice inspirational story about how the Holy Spirit first came to the church and how those first Christians spoke in languages that they had not learned? Is it simply something very distant we read about but not relevant today? Certainly we would say the Holy Spirit is relevant for our lives today, but what about everything else that happened on that Pentecost day? Do we think it all strange? Does it relate to our own personal experience?

To those who are familiar with the Scriptures, these verses depicting the Holy Spirit outpouring should be well known; but do we understand them? Certainly the first observers were very confused – going so far as to think that those involved were intoxicated with drink and, at that, early in the morning. These Christians acted and behaved in an uncommon, out of control, uniquely different way. Perhaps we should ask if we would be willing to behave in a similar fashion today. Would we risk our reputations with such wild behavior? Would we be willing to be used by God in such an untested, unfamiliar, and bizarre manner? Would we even be open to test the limits of the unknown and unfamiliar and let God control our actions and thoughts, even though this might throw us out of our comfort zones and safely controlled, preconceived notions of what is acceptable and proper? Would we be willing to put aside our own limitations on God and let Him have His way, or do we make sure He fits our profile of what He can and cannot do – then and now?

In fact, you might even think it to be a pretty stupid question with your own personal response, “Of course I received the Holy Spirit when I became a Christian. Doesn’t everyone?” And that might appear to be a perfectly reasonable response, except for the fact that the great Apostle Paul asked that very question to some early disciples (Acts 19:2).

There are times when it is important to take a step back, take a deep breath, and look at what is before us in a fresh way, unencumbered by the familiar, with our eyes opened as though we were looking at something for the first time. That is what I wish us to do together by examining afresh the written word of God as it applies to these first century Christians and their beginning conversion experiences. We will do this by first going step by step through the book of Acts, observing and studying the instances where individuals first became Christians in the early church. Then we will examine those events in the light of didactic portions of scripture. Along the way, I trust that the purpose for the “title” question of this book will be satisfactorily answered and that we will have Biblical answers to how the earliest disciples in the church era became Christians and what they believed about those experiences.

Do you know how to lead someone to Christ? This book will make you think again. Do you know the gospel message? Do you know the purpose for church leaders? Are you fully birthed into the family of God? Did you receive the Holy Spirit when you believed? Think again. That is what this book will challenge you to do. The Rev. Paul Hoyt, a retired Church of the Nazarene pastor, said of the book, “My mind is being challenged and stretched.”

Don’t be alarmed. This book is completely Jesus-focused. The age-old biblical truths about Christ are not being challenged. Jesus is God, the second person of the triune Godhead, born of a virgin, crucified and resurrected bodily and spiritually to new life. His blood cleanses mankind of all sin, no one comes to God except through Him, and the Bible is the Word of God.

But the evangelistic message and experiences of the Bible of those early believers about this saving Jesus should correspond to the thought and practice of present-day evangelism. The disparity, however, might surprise you. This book will help the Church get back to a New Testament evangelism that has somehow been lost along the way.

Born in California, Bob McArthur graduated from the University of California at Davis before attending Princeton Theological Seminary, where he earned a Master of Divinity degree in 1969. Upon graduation, he married Susie, and they have five sons and a daughter who have given them eleven grandchildren, all living near their home in Mt. Holly, New Jersey.