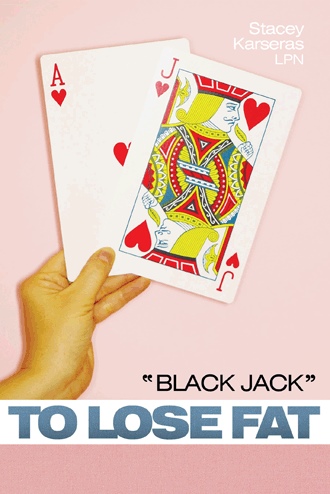 Get your LIFE and GROOVE back with "BLACK JACK" To Lose Fat!! A guide explaning the Health problems that being over fat may cause, how we become fat and the means to lose the fat forever, live longer and stronger with healthy nourishment choices and consistent resistance training.

Are you tired of wasting money on diets and diet gimmicks, or are you just tired of being tired? This guide is filled with information about health and fitness, including how nourishment choices fuel the body and how healthy nourishment choices in combination with consistent resistance training may decrease the risk of health problems.

“Black Jack” to Lose Fat has twenty-one sections that explain the best time to exercise, how to exercise, why you should exercise, what foods to eat, when you should eat, glycemic index values and the human body, weight loss vs. fat loss, and how to feel and look great. “Black Jack” incorporates twenty-one resistance-training exercises to burn fat; gain strength, endurance, and lean muscle mass; and decrease health risks and pain. This program is recommended three times a week. The effort becomes easier with each workout because you are your own personal trainer. Start slow and make gradual changes for long-term success. Everything in moderation with no deprivation. So don’t deprive yourself of feeling and looking your best! Stop making excuses for feeling bad.

Growing up, I was an active child. We lived in the country on a lake, I rode my bike all the time, and we always had a swimming pool. As soon as I reached puberty, I started to notice more fat appearing over my chest and stomach. Several years later, I noticed fat appearing on my upper arms. Over time, the fat increased all over my body, and I became less active. I was uncomfortable and lived with some kind of pain almost daily.

I worked in health care most of my life, and I observed firsthand the risks that being over fat can cause. I also watched my father suffer with heart disease due to unhealthy nourishment choices, lack of consistent exercise, and smoking.

After many failed attempts for a fast, easy way to lose fat, including fad diets and diet supplements, I contemplated weight augmentation surgery, but luckily I have a low pain tolerance and I chickened out every time because of the experiences I’ve had working in healthcare I’ve seen the single surgery that turns into multiple surgeries due to scar tissue, further injury or weight bearing on a particular muscle or joint, complications, infection etc… I noticed that many health care employees are fat and unhealthy just like me, and we were increasing our own risks of becoming the patient instead of the caregiver.

For years, I tried to incorporate healthy nourishment choices daily prepare meals at home and decrease the number of times that I went out to eat or had fast-food items. I had a multi-gym for a long time, many years later I purchased a resort-size treadmill. For two years, I power walked three or more times a week and covered approximately five to ten miles a week. Because I was burning calories, I lost a couple inches and some weight, but I still had fatty deposits. The more I worked out, the easier it became to make these changes but I felt exhausted after this type of work out and not energized. I remember how I loved feeling strong when I tried to resistance train and I had the multi-station gym at my disposal in addition to several free weight/ dumbbells.

I realized that some of the foods I thought were healthy are not, because what I needed was to lose fat! I finally learned about the glycemic index value and how it relates to the nourishment choices that we make every day.

After four years of conducting over fifteen thousand pre op interviews for anesthesia at an orthopaedic surgery center, I noticed that most of the patients were uneducated about their own health.

I incorporated a fitness and nutrition program that includes healthy nourishment choices daily that will fuel the body and provide energy. It also includes “Black Jack” 21, twenty-one resistance training exercises that will produce lean muscle mass and burn fat. This resistance will be different for each individual and it will depend on the strength of the muscle or joint that is used.

This combination has stabilized my hormones and my mood and blood sugar levels, which has decreased my cravings and desire to binge. It has also decreased my aches and pains and has allowed me to start losing the fatty deposits, decreasing my risk for health problems and increasing my life span. In less than a year, I have transformed my physique; the fat literally melted off and still is gone, and I am four sizes smaller than when I began. I am strong! I feel great! My hair, skin, nails, and teeth are in better health than ever before, and others tell me that I look ten years younger than my real age!

I encourage anyone who has ever tried to lose fat to take the “Black Jack” to Lose Fat challenge and get your body and groove back! And I commend anyone who can shake a weight for one minute, not to mention six minutes!