Rediscovering the Passion of Primitive Godliness 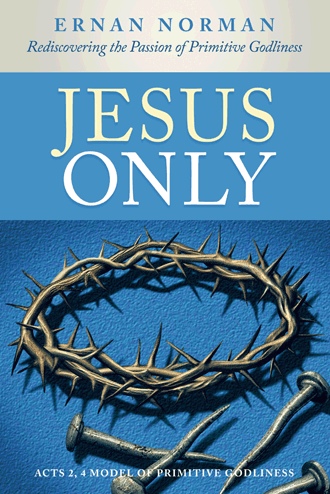 The focus and theme of this book is Jesus only. The eternal verity taught in Scripture is that Jesus alone saves. Therefore, the central focus of the church must be on Jesus Christ, the One crucified, risen, ascended, interceding, and coming again. This was the secret to the life and power of the apostolic church. Everything about the early church, as recorded in the book of Acts, was due to the presence and power of the Lord in His church. The Scriptures clearly speak about their passion but also about the One who was central to their preaching, teaching, and living as a body of believers: “And daily in the temple, and in every house, they ceased not to teach and peach Jesus Christ” (Acts 5: 42). Unfortunately, the church no longer measures up to the life that God intended for it. In these final and closing days of earth’s history, Jesus is anxiously awaiting for a portrait of Himself in His church. The spirit and power of the apostolic period must return. The central focus of Jesus Christ as Lord and Savior must return. The dynamic Holy Ghost empowerment of the church must return. The daily growth of the church must return. The self-sacrificing spirit that should mark the life of a true disciple must return. There is no question that we must return to primitive godliness, and for that to happen, the church will have to return to her first love, which is a central focus on Jesus.

Ernan Norman has been a minister of the gospel for more than thirty years. As a minister, Ernan has been actively involved in pastoring churches, evangelism, and discipling, and nurturing those under his care. He has served as a minister of the gospel within the Caribbean and the United States. Ernan also holds MDiv and DMin degrees from Andrews University Theological Seminary. Ernan has served as an assistant professor of theology and religion at Atlantic Union College, South Lancaster, Massachusetts, where he taught and mentored ministerial candidates for pastoral ministry. He also taught his specialty "Witnessing to the Secular Mind." Ernan is the author of the book, A Strategy for Reaching Secular People: The Intentional Church in a Post-modern World. He is a church growth consultant and conducts seminars on how the church can reach and disciple the secular post-modern generation for Christ. Ernan and his wife, Velvia, have three children, and they currently live in South Lancaster, Massachusetts.