At The Corner of 6th And North 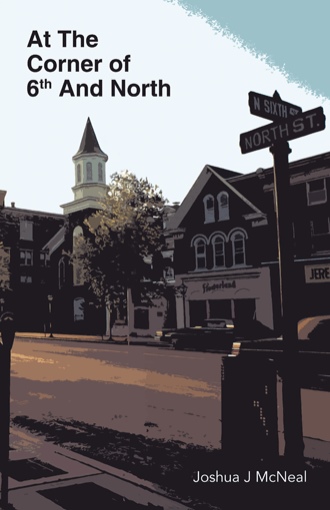 The shrill ring of the telephone caused a short gasp to leave her throat. She stumbled over to the phone quickly pulling it to her ear.
“Hello?”
“Hello, Mrs. Newman?”
“Um, yes. Who is this?” she questioned.
Leaning against the counter, she furrowed her brow in confusion. Who could be calling at this hour?
“Yes, Mrs. Newman, this is a very good friend of Lisa’s. She has been asking us to meet for some time now. I have helped her through a lot and she thought our meeting would be a good idea.”
“Lisa wants us to meet?” she asked.
“Yes. So tomorrow you are going to get an invitation in the mail. It will have a time and place where you will come to meet me. I will provide you with a place to stay where you will get the much needed rest you have been longing for. I will also present you with a fantastic gift if you will only come and receive it.”
“How do I know that you are not a hoax or some kind of creep trying to abduct me?” Her guard was rising and she found herself gnawing on her middle finger.
“I know that you have seen a change in Lisa over the past few years. Her anger and resentment have subsided and she has become a much happier and pleasant person to be around. All I will leave you with is this question: Do you want a change in your life? The invite will be in your mailbox tomorrow. It’s your choice. Have a nice night, Diana.”
And with that the phone line went dead. She stood in her kitchen with the phone still in her hand for many minutes reviewing the past conversation in her head. She quickly dialed Lisa’s phone number but her phone quickly went to voicemail.
Her mind was racing as she changed into her pajamas and brushed her teeth. She lay in bed lost in thought for a long time before drifting off to sleep.

Not long after sunrise, she awoke to Duke scratching at the door downstairs needing to go outside. She threw on her robe and ran down the steps. Grabbing the pink leash off the coat rack next to the door, she hooked it on Duke’s collar and walked out into the sunshine and freshness of a new day. She smiled as she thought back to the day they’d bought Duke. The pet store owner, Ted, had assured them that the puppy was a girl so Kara, only seven at the time, picked the nice pink leash. Jim and Diana were both huge “Dukes of Hazard” fans and hence, couldn’t name the dog anything but Daisy. It wasn’t until the dog’s next appointment that the truth came out, and Daisy became Duke.
Duke started on his normal routine, first sniffing the air, and then circling the yard, looking for that perfect spot. The neighborhood glowed in the aftermath of the rain. Diana watched a couple trying to stuff three little kids into a minivan across the street. It was humorous to watch the two flustered parents and the three excited, uncooperative children. She could hear the father yelling that they wouldn’t go at all if they didn’t get in the car and the children saying that they couldn’t wait until they got there. She didn’t know where they were going, but she knew two things for sure: the kids were more excited than the parents, and mom and dad would sleep very well tonight.
The beagle yanked on his leash signifying that he was finished and was hungry. Stooping down to pick up the newspaper, Diana followed Duke back into the house for breakfast. Every morning without the kids consisted of the same pity breakfast: two over-easy eggs, 3 strips of bacon, 2 charred pieces of toast, and a tall glass of cold, refreshing orange juice. Duke also received an extra chicken flavored biscuit on these mornings.
A jog seemed only appropriate as restlessness sunk in. She hated everyday without her kids and this day seemed to be dragging on slower than normal. She changed into her normal jogging outfit that consisted of yellow shorts rising above the knee and a yellow and blue striped tank top.
She hooked up Duke once again and he began to bounce around the room immediately. She could barely get her shoes tied as the beagle ran around her continually trying to get right up in her face.
“Duke, we can’t leave unless you settle down for a minute,” she pleaded. “Just let me get my shoes on!”
Once out the door, the dog knew his routine; don’t run too far ahead and to the side. He knew his place right beside her. She turned left at the end of her driveway and headed west down Sycamore Street. They had moved here nine years ago when Jim had received a great opportunity as a building contractor, the career of his dreams. For the most part she liked the small neighborhood. She couldn’t say that she knew too many people that lived around her, but they were quiet and courteous and to Diana, that was the most important thing.
The sun beat down as she ran. She quickly remembered her water bottle still sitting on the ledge by her door.
Looking down at Duke she uttered, “This will be a shorter jog than normal buddy. We don’t want to die of heat exhaustion.”
Duke seemed to agree as he trudged on next to her and felt the intense heat of the sun. It was a beautiful day. Diana could only see one small cloud up through the trees that surrounded her. Squirrels were darting to and fro in front of her. She often wondered what they were truly up to. They always seemed so busy.
Diana suddenly stopped and could barely get the words out, “Oh why did I go this way…”
The brick house loomed behind the picket fence. It stared her down and taunted her. The sweat running down her face was soon mixed with tears as she stood lifeless before the estate. She hated this house. The only thing she disliked about this whole neighborhood was this place.
She glared at the front door. “I hate you. You ruined my life.”
Turning around quickly, she raced back to her own home. Stopping at her mailbox, she grabbed the mail and headed back inside. Duke went straight for his water bowl and lapped loudly, desperately trying to hydrate.
She quickly took a shower and pulled herself back together. The last thing she needed today was haunting memories. Returning downstairs, she sifted through the mail. The many doubts in her head that she would find an invitation among the junk mail and bills suddenly vanished as she held in her hand a small envelope with only her name and address on the front.
Diana tore it open and, sure enough, a card with a time and place was inside.
She read aloud. “The corner of 6th and North at 7 PM…today? This invite is for today!? That’s crazy! Talk about last minute.”
She opened the cupboard door under the sink to throw it away when something else in the envelope caught her eye. She removed a photo and had to catch herself on the counter. Her eyes scanned a picture that she had never seen before but the first glance of it almost made her faint.

A mysterious hotel, an intriguing man, and six strangers are not what Diana expected when she accepted an invitation for a free gift and some rest. But that is exactly what she received in this thought-provoking novel that will test your faith and open your mind to a world unseen. Travel with Diana on this wild and intense journey to the corner of 6th and North!

Joshua J. McNeal received his BA in Biblical Studies in 2006 from Frontier School of the Bible. He currently works at the Garden of Read’n, a Christian bookstore, and is the worship leader at his church. He lives in Montana with his wife, Danielle, and his two children, Regan and Myles.