Weighing the Choices for a Marriage "Made in Heaven" 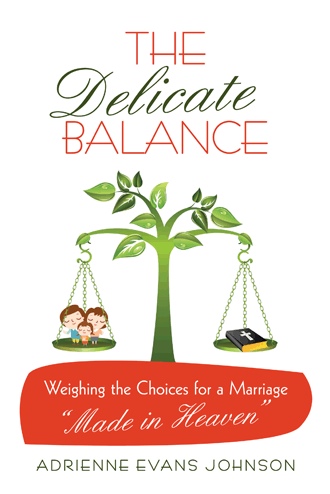 •Carla's Thoughts Carla felt a rush of anguish as she glanced at the sink on her way out the door. She and her husband Marlin had agreed that he would put the dishes into the dishwasher in the morning, and she would put them away in the evening. Lately, she was doing double duty as he was departing earlier for work and leaving the dishes untouched. Carla hesitated but then proceeded to lock the back door. As she entered the garage, she paused again but abruptly dismissed the thought. “I'm tired of doing his part and mine,” she murmured to herself. Backing out of the garage, she continued to muddle her frustrations. “Why should I keep doing his part? I am going to leave those dishes up there until they smell. That will get his attention, and he will know that I am serious!” As she whizzed down the street and onto the freeway, she continued her complaints. The more she chattered, the quicker her pace until she had blown past the reroute signs that announced a new traffic pattern starting that morning. She had seen the sign just yesterday but distracted by her own defiance, she missed it today. Once in the thick of the traffic, she slammed her fist down in remembrance. As she sat in the gridlocked traffic, she continued to ponder the dish issue. Her neck became stiff from more than the just the frustration of traffic. She realized that her stubbornness was costing her more than a little time with the dishes. She was unsympathetic to her husband's recent work issues, there was added friction at home, and the worst part was her disobedience to God. She was like the stiff-necked people in the Bible, ignoring the prompts to soften her heart. Learning from Carla Dishes in the sink – a small issue – but so often small issues escalate when left unaddressed. A hardened heart has caused many a fall. A hardened heart can lead to divorce. It was the reason that Moses permitted a certificate of divorce (Mark 10:4). However, God never intended for a marriage to end in divorce. In Malachi 2:16, God said He hates divorce. It was the hardness of heart that made God angry with the children of Israel and led them to spend forty years in the wilderness until all above the age of twenty died. After all that He had done for them – displaying His glory, showing them signs in Egypt, freeing them from Pharaoh, and providing for them daily in the wilderness – still they did not heed His voice, and embrace His sovereignty; they even tested Him ten times. •They endured the ten plagues in Egypt that were to demonstrate His sovereignty and power. He also instituted the Passover, and the Feast of Unleavened bread, parted the Red Sea, and performed many other signs and wonders that were to be shared with future generations so that all would know Him as the Lord. He had sworn to their fathers to lead them to the Promised Land and continually showed His faithfulness, yet they persistently complained against Him. Their hard hearts kept them out of the Promised Land. Their hearts led them astray and they were a rebellious people. We can glean from the life of David as a man after God’s own heart. Even when he sinned, he always repented. You never see him with a hardened heart. The moment his sin is brought before him, he falls before the Lord with a repentant heart. Those who didn’t prosper, who suffered the worst demise, or were used for evil, were those whose heart was unwilling and therefore hardened. “The heart is deceitful above all things. And desperately wicked. Who can know it?” (Jeremiah 17:9). •Your heart is the source of your thinking and there is a lot of stuff in you. It is the place where your pre-existing condition resides. When the mind is undisciplined, any sin is possible. It is the renegade soul that leaves one vulnerable. Discipline is the difference between one who makes it to the Promised Land and one who dies in the wilderness. Your heart is the place where God meets you, so guard it from the issues of life by always keeping it open to God. How does having a disciplined mind affect your marriage? It affects your thinking, and your thinking affects your actions. It affects the way you pray and wait for answers. If you want to improve your marriage, you must improve your thinking.

Marriage is in crisis. The divorce rate is high and both men and women have gravitated to roles that are unstable, unhealthy and unnatural. The thing that we desire the most seems to give the most turmoil. How can it be that God created marriage as the foundational relationship for society and yet it is the most difficult of relationships? How is it that God said, “It is not good for man to be alone”, yet every time man and woman get together their union brings more smoke than fire? Is it the two becoming one that creates the problem or the choices we make in marriage? God has a wonderful plan for marriage that carefully blooms into a delightful union when you choose Him as your guide. Every woman who desires a marriage “made in heaven” will appreciate Adrienne’s honest, open and real approach to the difficult areas of marriage. She shares real life experiences that inspire, encourage and re-affirm the value of womanhood and the beauty of holy matrimony.

Adrienne Johnson is founder of Inspirational Living, an organization dedicated to uplifting women to the purpose that God intended. Her outreach includes bible study, young women’s mentoring groups and spiritual publications, including “Who Are You Sleeping with Now? Get Dressed and Ready for the Husband God has for You”. Adrienne is a spiritually grounded professional with over 20 years of business experience in corporate sales and consulting. Adrienne has enjoyed managing global accounts and building personal and professional relationships with Fortune 500 clients while executing principle-based problem solving strategies. She has a Bachelor’s Degree from Loyola University of Chicago where she currently resides with her husband and triplet sons.