THE END MAY BE FARTHER THAN YOU THINK

END TIME PROPHECY AND THE SECOND COMING OF JESUS CHRIST 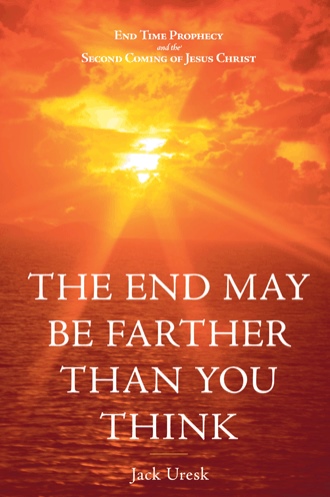 CHAPTER ONE THE BOOK WITH THE SEVEN SEALS The Great Gathering The vision of John regarding future events begins in Chapter Four of The Revelation of Saint John the Divine. At this time John is shown a great gathering before the throne of God. It is important to understand this critical point in John's record since it is our beginning point. If you're taking a plane trip, you need to know the destination and the beginning point in order to determine the direction to travel. In the same way, we need to know where John is starting in order to put the work in context. Any interpretation which places this gathering at a time other than John's time must provide scriptural evidence to support such an interpretation. It is not sufficient to say that it must immediately precede the events depicted by the seals, trumps, and vials which are shown to those assembled at the great gathering. These events are shown to those assembled before the throne as the seals of the book are broken at this great gathering, and could be scenes of things transpiring concurrently with the great gathering, records of the recent or distant past, or prophecies of the near or distant future. In other words, the seals, trumps, and vials are visions within a vision and may therefore have a setting different from the gathering itself. There are, therefore, two separate issues to be resolved. One is the setting of the great gathering. The other is the setting of the events shown by the opening of the seals at the great gathering. A number of possible interpretations were considered, including a gathering at the time of John, a gathering just prior to the events of the last days, a gathering at the beginning of the millennium, and a gathering at the end of the world. Of the interpretations evaluated, a gathering at the end of the world associated with the judgment appears to best fit the available data. 2 And immediately I was in the spirit: and, behold, a throne was set in heaven, and one sat on the throne. 3 And he that sat was to look upon like a jasper and a sardine stone: and there was a rainbow round about the throne, in sight like unto an emerald. 4 And round about the throne were four and twenty seats: and upon the seats I saw four and twenty elders sitting, clothed in white raiment; and they had on their heads crowns of gold. 5 And out of the throne proceeded lightnings and thunderings and voices: and there were seven lamps of fire burning before the throne, which are the seven Spirits of God. (Rev. 4: 2-5) At the beginning of the vision, John is shown one sitting upon a throne in heaven. We are not told who is sitting on the throne, but from the descriptions which follow, this would appear to be God the Father, who receives glory and honor from those assembled around the throne (Rev. 7: 10). The power and majesty of God are manifested by the lightnings and thunderings and voices proceeding from the throne.

Is it possible that:

• The earth will be devastated by objects from space prior to the second coming of Jesus Christ?

• There may be a considerable length of time, perhaps decades, between the first signs of the coming of the Lord and the actual descent?

• The four horsemen of the apocalypse have no relationship to the last days?

• Armageddon will be the greatest battle never fought?

• There may be more than one coming of Christ?

• Everyone will be “left behind” because there will be no pre-tribulation rapture?

This book explores these and other possibilities.

Jack Uresk earned Bachelor and Master of Science degrees in geology from BYU. He worked as a petroleum geologist with Conoco for 14 years and is presently with Barlow and Haun Geologists, Inc and R & R Rest Stops, Inc. He and his wife Masayo have eight children.