Journey into the Light

A True Story of Death and New Life 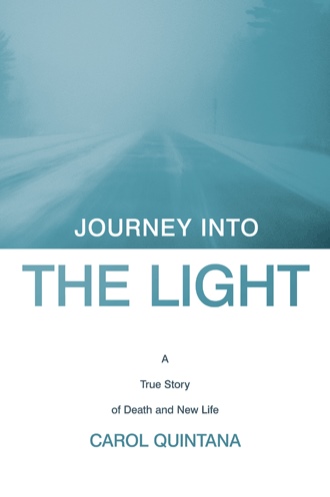 Instantly, I was in Spirit

I was out of my body. My two year old son Richard, who had been standing in the middle of the front seat, went flying onto the floor of the passenger’s side. It was that little space on the floor that saved my sons’ life. Just before I cried out "O My God, Help Me," my husband was leaning over the front seat making sure my sleeping daughter was comfortable with Tory Duke. Suddenly, my husband and Tory Duke went flying to the back of the van.

The color red that I had seen was a red 3/4 ton pickup truck and the bright light was the head lights of that truck. The collision was head on to the driver’s side. VW vans have nothing in the front of the van to protect the passengers. Fortunately, I was wearing a thick wig. At the time wigs were in fashion and a fast way to get ready to go out. The wig was full of windshield glass. My head was full of glass too, but the wig took the brunt of it and partially protected my head. The glass had to be removed and left me with a lot of thin scares and missing hair.

The engine of the truck was on my head and the steering wheel was in my stomach. The door almost took off my left leg at the knee. The driver of the truck, named Frank from Pike, was fine except that he was so worried about me. He told the State Police that there was nothing he could have done. He lost control and took all the blame; he told the police officer that came to the scene that it was his fault. He had been returning home from work and lost control. But in all reality there was no control to be had with all the weather conditions. At this point we were all in God’s hands.
After the impact I was instantly in spirit. I was looking down and could see my husband holding my body, rocking me back and forth in the road. He was crying out over and over "O my God, she is dead." After serving in the Viet Nam war, as a medic in the burn treatment hospital, Richard knew death.

I have read a few stories about near death and the authors talk about a dark tunnel, but to me it was more like a funnel. Darkness was all around me and a small stream of light was beaming on my husband rocking my lifeless body at the smallest end of the funnel. My one leg was almost not attached. I was feeling no pain. I was feeling great; I was being loved and comforted, all eyes were looking at me and caring for me. I was at the same time, trying to see my children, dog, and the van.
I keep wondering where my children were. All I could see was my body in Richard's arms in the middle of the cold dark road with Richard crying out loud. As I traveled upward the end of the funnel started to close and the small light on me in the road was getting dimmer. Soon I was all in light. But I was still wondering about my two children. They were not with me, and I wanted my children safe.

For a moment, my thoughts turned to myself and I could see myself in Spirit in three dimensions walking up to the bright light with a huge escort. I would say he was my guardian angel. This angel stayed by my side for about an hour, in earthly time. He was comforting me for the complete trip. For a slight moment, I felt like I was in the 1965 movie "Doctor Zhivago" entering a bright white snow white crystal castle. My angel was Omar Sharif and I was Julie Christie.

I was told that white was the absence of color, but this bright white light was like glimmering crystal on snow. It was white made from all the colors of the rainbow. It was a great

Whether the topic is life or death, author Carol Quintana has a few answers. She knows what it is like to be dead for over sixty minutes. She lives today to tell her story.
The Light is as so many describe it to be. It comes from a source. She was in the Light, and she shares the truth with you—her truth and His! The Light is more than just the way. This Light teaches you about real love.
Whether the topic is spiritual or supernatural, Quintana can explain the difference. If you believe in angels or demons, let her share with you her experience with both. Even if you don’t know the Word of God, it is easy to understand. Quintana shares many examples from the Bible. This is good reading for those searching for answers to questions such as, “Is there a God?”, “Does life go on after death?”, “Do I have spiritual or supernatural angels with me?”, or “Do my gifts come from God?” Your birth and your heritage is no mistake. The gifts God gave you at birth are yours to make the most of. Most of all, Quintana wants every reader to realize that God is good!

Carol Quintana was born in the Steel City of Lackawanna, New York, off the shores of Lake Erie. All she really wanted was to be a homemaker, a wife, and a mother. To her surprise she had much more than she ever dreamed of having—not material things, but the things that come from true love and are received by the Holy Spirit. It was only after her death when she was able to truly understand His message for all.