Are You Ready To Meet Your Maker?

Caught In An Undertow 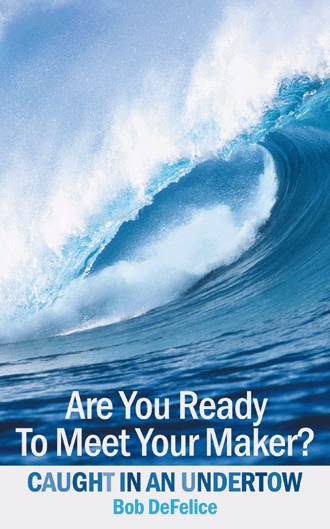 I think that the basic problem we have as humans is that somehow we believe that we made ourselves.

That's not just an observation on others― it’s an accusation about how I used to be. It’s also a place, or state of mind, that I have to continually remind myself not to drift into again. I knew that there was such thing as God, and Jesus too. I’d gone to Church—a weekly “had to”—barely paid attention and found it irrelevant, assuming that the God they were speaking of was as well. God and His book the Bible had become fictionalized along the way. The world's view of the Bible became my view: I saw it as some sort of semi-historical, fictional narrative with characters and stories; fables that made up a moral code of yesteryear, which no contemporary-thinking human could ever possibly live by. It was moderately relevant, marginally relatable, and minimally useful.

Had I read the Bible and developed this opinion? No, I'd just developed this opinion over time from my own thoughts, what I’d heard from others who sounded knowledgeable, and what was generally thought of it by the rest of society―people like me who hadn't taken any time to read or understand it.

So my opinion on the Bible and what it said about God and Jesus was largely based on the little I knew, plus the little others knew. So here we are, talking about something we both know very little about, slinging opinion around as fact—when in fact it's really just opinion. So you may believe you are right about God and the Bible. I may believe that I am right. But our opinions are irrelevant unless we have both read the Book—or at least seen the movie.

Here's an example of what I mean: when the movie Avatar came out, it quickly surpassed the movie Titanic as the number one money-making film of all time. A pretty popular movie no doubt—one the whole world seemed to be talking about. Have you seen it? What did you think of it? I haven't seen it. I have no idea what it's about, just what I've heard others say and reviews in the media.

Do you want to know my opinion about it?

If my story does nothing else but encourage you to at least read the Bible, it will have been worth it. I encourage you to read the whole Bible—read it to disprove it or read to believe—just don't tell me what you think about it until you've read it. For me? I’ve read it and I continue to read it daily. I don’t think I could go a day without it. Bottom line–for me? It's the greatest self-help book ever written, a true story and it changed my life forever!

Many of you reading this book don’t know me, so let me say a little about who I am. I am a father of four, a loving husband, and have managed radio stations for over 25 years. That’s who I am as a human being.

But here’s the most important thing you should know about me―I am no-one's judge. God is our judge―no person is. No person is perfect. Certainly I am not perfect and can never be. The good news is, God already knows this about us and He's already worked that out.

Jesus Christ is my religion, not the building we used to show up to every Sunday as kids. I admit I have made a study of the Bible during the last twelve years as a result of an accident that happened to me in 1998.

On October 21st, 1998 I went into the hospital for same day elbow surgery.

I almost died on the operating table.

Once the surgery was over and I began coming out of the anesthesia, I began to realize I couldn't breathe. I also couldn't speak or move. It was all so surreal.

The team of doctors and nurses that had just worked on me had dispersed and was chattering over in the far corner of the operating room, unaware of me. I realized that if I couldn't get someone's attention—and quick—that'd be that. I couldn’t speak. I couldn’t move. I couldn’t even motion. I was too doped up on anesthesia. I tried to make noise—nothing; I struggled—sinking, I lost consciousness.

When same-day surgery turns into a near-death experience for this young dad of four; he faces life’s biggest question: am I ready to meet my maker? Come along on a true story, an intellectual and emotional journey of self-discovery.

If you have never gotten a chance to read the Bible, or have tried but can’t seem to get through it, this lightning-quick survey of what the Bible has to say about life’s biggest question is unpacked simply and honestly. At death’s door and desperate for answers, author Bob DeFelice discovers truth in a cold, dark hospital room. It takes a same-day surgery procedure gone horribly wrong to force an eight-day journey of self-discovery. This concise exposition of what God’s Word says concerning life and death is a must-read for anyone that wants to understand what the Bible says about life after this one. Are you ready to meet your maker? This book can help you answer that question once and for all.

Bob DeFelice has been a radio broadcaster for over thirty years and hosts a weekly talk show. Bob; his wife, Lisa; and their four grown children reside in the Hudson Valley. Bob is an Elder and Men's Ministry Director at Hudson Valley Christian Church.