The Remnant: The Legend of the Seer 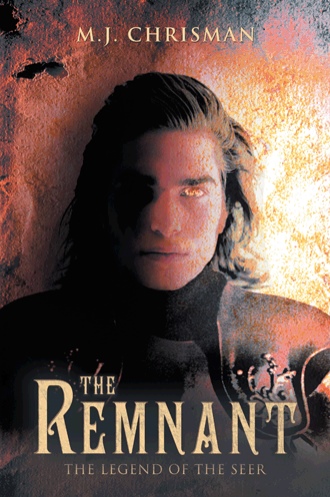 The young carpenter and queen ran vigorously, trying to stay ahead of the trailing army. William’s heart pounded with adrenaline as he ran through the wheat fields, thinking Elona was close at his side. But when he looked back to her, he saw that she sinking away toward the Golgans. Elona’s steps became wobbly and she was about to collapse from exertion. The army of beasts charged furiously through the wet lands, smashing through the tall wheat stalks—their prize in sight.

Turning his gaze toward Elona, thunder again sounded in the heavens as the rains poured down upon him. He looked deep into her beautiful face and knew what he was supposed to do.

Ready to fulfill his purpose, William began running toward the horde of monsters.

As he ran passed the young queen, Elona turned and yelled out to him, “William! What are you doing? Come on!”

Will stopped and looked at the Golgans as they came rushing toward him and saw that the ravaging beasts were only two hundred feet away from reaching him. He then turned and looked into the dark, stormy clouds and saw that their Midobian rescuers were not going to reach them both in time.

Tears filling his eyes, he cried out to her, “It’ll be alright… don’t stop running!”

Struck with realization, Elona felt the air in her lungs evaporate. “No, Will! Please… please don’t do this!” Tears began to stream down her soft lips as she lowered her head, all sorrows rising in each of their hearts as the whole world seemed to move in slow motion.

In this surreal moment, as both the Golgans and Midobians closed in on either side, William said with determination, “I have to do this for you, Elona…. I am ready to do this.”

Their eyes met for the last time as Will turned, running toward the Golgan demons, ready to sacrifice his life. It was the hardest thing for Elona to do, but the young queen turned the opposite way and started to run for the Midobians, sobbing as she ran for her life.

William Ore ran toward his approaching doom as they closed in. With fire in his eyes, he pulled out his sword, held it high in the air, and charged at the horde with a loud war cry. The Golgans in front, awe-struck by this, began to tremble, as a few of them turned, running away from the mighty warrior. But Iglaw was not shaken as the rest of his demons charged with all speed toward the single man.

Elona ran as quickly as she could through the muddy fields when she looked into the gloomy sky and saw a white figure begin to swoop down upon her. Just before it grabbed her, she looked back at William and saw that he was seconds away from engaging the army.

Right as Will stood to face Iglaw, all of the other woodland beasts swarmed over him. Elona screamed out for him—horrified—and then fainted in the Midobian’s arms. As the winged warrior held the unconscious queen, he signaled to his companion to save William. The Midobian fell through the rain showers like a lightning bolt to do so. With Elona limp in his arms, the rescuer zipped through the sky, heading toward the castle.

Rain drenched his clothing as a mob of people circled around him, blocking him in their barrier of tightly formed bodies. The faces of the great host blurred before him; he couldn't make out a single expression. He gazed at his chest and saw blood trickling down and falling into pools of water beneath his feet. At the same time, he held a sword firmly in his grasp. He inched his gaze upward and realized that he had seen this all before....

A soft glow suddenly began to emanate from his body. Starting small, it grew more and more brightly until he was totally consumed with light, power surging through his being. William Ore then let out a terrible war cry that tore into the hillsides as he charged into the multitude.

M. J. Chrisman graduated from Covenant Bible College and Seminary with a bachelor of science in theology. Growing up on a small farm in Missouri, the world of Trinomia began to unfold and develop in Micah's mind the more time he spent outside pretending to be in it as a young boy. He began writing his debut novel The Legend of the Seer in 2003 when he was only fourteen years old. Having completed his first book in the series, Mr. Chrisman is currently working on his second book, The Remnant: The Fall and Rise of the Three Nails. You can learn more about Micah and the Remnant series at www.mjchrisman.com