The Anointing exposes the deeds of the flesh 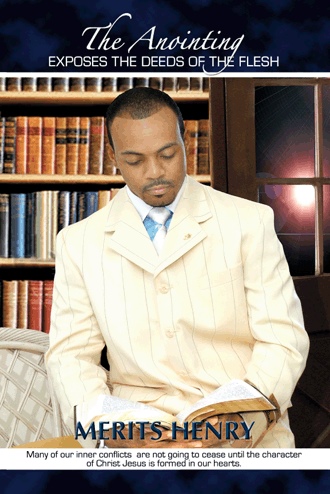 INTRODUCTION T his book is about spiritual warfare. The context is God-inspiring and directed divinely by the Holy Spirit. Many things in this book are to further open your eyes to much deeper revelation and truth concerning his plans and purpose for your life. The book is divided into two main parts, namely The Anointing verses Lucifer and the Flesh, and The Spirit of Jezebel and Ahab. According to the name of the book, “The Anointing Exposes the Deeds of the Flesh”; the parts previously named will be clearly interrelated with definitions, terminology, typology and exegesis. All quotations from scripture are from the authorized King James Version unless otherwise noted. In regard for integrity and loyalty to the ministry of God, please note that changes are made in relation to my life testimonies, experiences and person’s names. As you read this book, it is my prayer that you will become increasingly aware of the wiles of the devil through the tangible anointing on your life. May you be transformed from glory to glory.

The Time Has Come To Receive


As a people birthed with purpose, God has reserved the best for the last to display his tangible anointing power to a dying world. The anointing is that divine inducement from above, and not a desire of emotional feelings. It comes not with years of experience, status and articulates. But rather it is given by laying aside every weight and sin that easily besets us.

Discovering the anointing on your life; you will realize that it an inheritance given to serve and not to be served.

Therefore, we must desire nothing less than the anointing that destroys yokes of bondage, opens blind eyes, straightens crippled limbs, mends broken homes and deliver every captive.

God’s Word promises that there will be an overflow, or a double portion, of wine and oil (or anointing), coming your way in one month. That’s a double blessing! This double portion is waiting for you, it is part of your inheritance through Christ Jesus. It will show you how to walk in the anointing of the Holy Spirit and do greater works than that of the risen Messiah.


After reading this book your life should never be the same again. It is my desire that readers obtain spiritual experiences and insights that will enlarge their spiritual vision for tomorrow.

Pastor Merits Henry is the visionary leader and Senior Pastor of Worship Conference Ministries, Grand Cayman with his wife, Minister Rashemia Henry. His ministry was birthed in his spirit while he was at Bethel Bible College in 2001 while pursuing a post graduate degree in Theology and Minor in Counseling. Under his dynamic and prophetic leadership, Worship Conference Ministries has become a spiritual beacon at the local and national level.

Pastor Merits Henry was born in Jamaica, St. Catherine to Mrs. Delpha Henry and Mr. Adonijah Henry on March 24th 1981. He experienced the call of God at the tender age of nine and began preaching when he was only 15 years old at the Inter School Christian Fellowship (ISCF) at Vere Technical High School and Kingston Technical High School.

He was later appointed by the clergy as a Youth Minister at Good News Release Center, Prophetic Church of God, Love Lane Jamaica, under Overseer R. Howe and Bishop Carl Wilson. He was ordained and consecrated for ministry by Bishop Wilson (his spiritual father) and Dr. Christopher (his Spiritual Teacher). In addition to his commitment and anointing, he willingly served as their Sunday School Superintendent, Sunday School Teacher, Men’s President and Youth President.

Under the inspirational leadership of Pastor Henry, Worship Conference Ministry has become one of the fastest growing churches in the Cayman Islands. This Ministry has given tangible support to more than three organizations. Programs are available at Worship Conference Ministries, which meet the needs of the congregation and the community. Pastor Henry is also actively involved in other devotional and teaching exercises at Schools and Government Departments of the Cayman Islands.

In addition to his full-time ministerial duties as Senior Pastor, Pastor Henry is also the Asst. Field Director of Gospel Crusade Ministerial Fellowship (GCMF) Grand Cayman, whose head office is located in Bradenton, Florida. He is presently the host of sweet hour of prayer and move of inspiration as their “Prayer Pastor” on Love 103.1 your power station of the Grand Cayman Island that is currently reaching millions of homes across the Caribbean and the world, both secular and Christian networking by way of new media technology.

Pastor Henry has had the opportunity to play a leading role in many churches locally and internationally, but remained obedient to the vision given to him by God. He is a dynamic preacher and teacher of the word with a heavy prophetic anointing in his ministry that spiritually empowers, equips, energizes, and break yokes of fear and torment. Through God, His ministry creates an atmosphere for miracles; defeating oppression, demons, addiction and sickness.

Although Pastor Henry is a multitalented individual, preaching the Word of God is what he has been chosen to do. His philosophical belief is clearly stated in the book written to the Philippians (4:13) which states, “I can do all things through Christ who strengthens me”. He strongly believes that there is no “I Can’t” in Christendom, only when pride gets in the way. He is known for his charming personality and winsome countenance. Pastor Henry is a firm believer that believes; “it is not what you are in Christ, but who you are in Christ”.

Pastor Merits Henry works diligently in the service of the Lord with his wife, Minister Rashemia R. Henry, and the dedicated members of the church. Pastor and Miniser Henry are the proud parents of Raar, Ramere and Azzan Henry.