Somewhere In The Bible 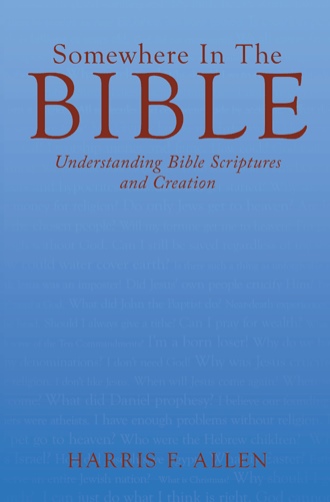 Was there really a global flood in human history? If so, when did it happen? From many of the latest scientific studies, evidence points to such a flood. The apparent scientific timeframe is about the time Genesis says it happened!
Author, Harris F. Allen states that his early questions and any beginner's questions will often be similar. He can also say that in retrospect, many of his answers now are in occasional conflict with at least one college professor’s during his college studies of both Old and New Testaments.
Seemingly simple questions one may ask: What if I'm a Gentile (adopted child; unknown heritage, as is the author)? What if I happen to be in one of those generations that received God's curse in the Old Testament?; is it still in effect, and should I ask God to let it stop with me?; Is circumcision still an absolute requirement?; Why don’t we still sacrifice animals at the altar?; What if I can't afford a full ten percent tithe, or just don’t give that much?; Which is the best denomination?; Did some dinosaurs and humans live at the same time?, and scores of others.
Allen excelled in both college semesters of Bible, even as he studied pharmacy as a major in a Baptist college. Another important point comes to his mind. Our public schools teach evolution, and usually enforce separation of church and state.
Today's lessons are what a student must learn for school, period! That is the subject, and a student will be graded for efficiency in that science and other subjects. A study in life will embrace a myriad of subjects not taught in public schools, and most real learning begins after school is finished. Really, there is no need to wait, because our brains are gifted with the capability of learning simultaneously; that which the Church teaches and that which the state enforces.
While his college background included intensive studies in chemistry, biochemistry, physics and science, this author’s best study efforts have been during his mature years. His almost endless questions prompted him to study as many authoritative scientific works as possible, and present his most important findings here. Much of his time has been devoted to scientific endeavors, with special interest in those things that can sometimes validate Biblical accounts.
Much Bible study and many scientific references are necessary for the types of materials presented in this book. The author’s personal library has not only increased, but seems to have multiplied.
Allen has respectfully disagreed with many on both Biblical understanding and the Creation/Evolution debate. He has also embraced those whom he feels earned that respect with diligent work, and he selects his choices carefully and prayerfully. The thinking of many great scholars are reflected in this book, on matters of both science and Bible. Asked about his research, the author stated that deafness and partial disability have been turned into opportunity. He had been too busy for over half a century, trying to earn the cost of necessities for reasonable family living. He now has time to study more than ever, with fewer distractions.
As much as is practical, supporting references are used. Frequently, he consults one or more versions of the Holy Bible. Other references are made from scientific studies, and personal conclusions often result from those studies.
When the author speaks of God as "He", that is not intended to speak of gender, but is merely a point of reference. There is no need for gender outside of our world. Even Jesus implied similar points of reference as He spoke of the Father.
Opposing opinions are respected! Those will invite discussions among others of like opinion. Some of the facts presented in this book will be irrefutable. Others will be questionable or debatable. Yet others will be opinions drawn from many scientific clues. The author pulls no punches when he sees the need, yet his defense is as solid as science itself. Such a work requires much research and study, and a scientific background is a necessary asset. This author meets those requirements!
While the hope is that this book will bring understanding and accuracy, the true purpose is to appeal to that curious nature in humans that naturally wants to learn more. When there is a questionable point or conclusion, perhaps that subject is the most important for more scrutiny and discussion. The answers are all out there, all that we need to know. We must search to find them, but they are there. Much information can be gained from true scientific studies and all of the greatest knowledge is Somewhere in the Bible.

For all who have found the Bible difficult to read and science hard to understand, this author did too! Wouldn’t it be wonderful if someone would take the time to study things such as difficult verses? Also, would it be helpful if somebody wrote it in a book?

Have we really found real truth to Noah’s flood? Does anyone know the physics that could cause such a global occurrence? Someone has now researched for most of a lifetime, plus three extra years of intensive study.

The answers are not always easy, the solutions not always simple. Modern Science finds more evidence almost daily that there once was a flood of such proportions.

Author, Harris F. Allen has spent countless hours attempting to answer his own questions. He has a few tools including much science and Bible in his college studies. Always an active overachiever, Allen has become deaf and partially disabled. That left far more time and greater opportunity than he could ever imagine.

Having a history of regular church attendance from his early youth, the author received a reasonable background, but always had some unanswered questions. So, in pharmacy school in a Baptist college, he excelled in New and Old Testament studies. Chemistry and science of various sorts were the main topics of study, and by adding Bible, that is an ideal mix for this discussion.

Allen will present his findings from both a scientific view and a Biblical understanding. He will explain what he found about difficult verses and some parts of the Bible that seem at times to be in conflict.

He will also discuss the physics, biochemistry and other dynamics that could be involved in such a worldwide flood. Regardless of science or Biblical belief, the flood did occur at about the time the Bible said it did.

Author, Harris F, Allen invites everyone to join him in an intensive search for his own understanding and perhaps yours. With a science-rich pharmacy degree from Samford University in Birmingham, Alabama, the author also studied Bible. Until now, many questions have gone unanswered in both science and Bible.