A Bipolar Woman’s Quest For Wholeness

by Ann Perkins & With Wanda Goerz 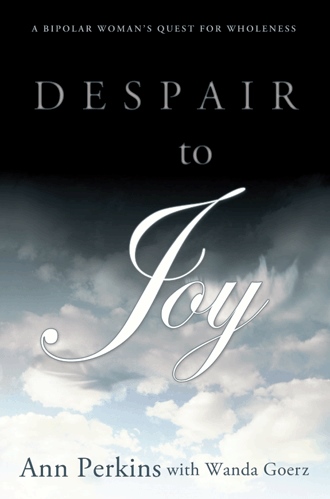 When both my husband and my mother left for their jobs each day, I began to experience regret that I was unqualified for gainful employment. I realized that my children would not need me at home forever. Karol suggested that I take the High School Equivalency Test through the General Education Program, but I became a licensed beautician instead. I was soon accepted at a school in Lexington, which was too far away for daily commutes. My supportive husband found someone to take over his barber shop; sold our boat; rented out our house; bought a mobile home as temporary housing; and found himself a job in Lexington, all within two weeks.

Lexington is quite beautiful. It is surrounded by thoroughbred horse farms, and is known as the Horse Capital of the World. Rolling bluegrass fields are outlined by board fences, usually painted white, but sometimes black. Some fences are built of stone and date back to the 1800s. Horse barns are often more luxurious than the average family residence. A view of the city and surrounding farms from the air is a spectacular sight. Those of us who live here sometimes take the beauty of this place for granted, but when we go away for awhile and come back, we realize that it is one of the prettiest places in this country.

Even before I had completed beautician school we decided to sell our house in Hazard and put down roots in Lexington. We settled into a church, bought another boat, and added a camper to our recreation equipment. Our girls were happy. Beautician school was another story however. Self-doubt set in, and I was excessively fearful of making mistakes that could draw a reprimand from my instructors. The instructors, as well as the other students, enjoyed watching me work in a state of anxiety.

My work station was located by the front desk in view of the entire group of students. The first haircut that I attempted was quite an enjoyable performance for them, but a nightmare for me. I managed to part and section the hair as I had been taught. When it came time to actually cut the hair, I simply slid the scissors across the hair without cutting it at all. I did this all across my client’s head before, to my great embarrassment, I looked down to see that no hair had fallen to the floor. I give myself credit for not throwing down my scissors and giving up. I persevered and actually cut the hair successfully on my second try. All the while I endured the laughter of my fellow students and my instructors as well.

Later I made a more serious mistake. I applied a color rinse and a dandruff rinse at the same time. Once I had done it, I asked an instructor to tell me if the procedure was correct. She gasped, “Oh no: that can turn the hair green!” I didn’t tell her that the procedure had already been completed. Fortunately, the woman’s hair retained its intended color. Eventually I loosened up enough to confide the mistake to another student and we broke up in laughter. It is true that laughter is good for the soul, but only if it isn’t at the expense of someone else. For a while then, I overcame my anxiety and fear of rejection.

At twenty-seven-years-old, I was a newly graduated beautician looking for a job. The city was saturated with beauticians, and I was turned down again and again. The more I searched for work, the more dejected I became. Of course my lack of confidence was apparent to prospective employers. I was actually shocked when I was hired by a lady who ran a one-woman salon. She asked me to begin work the very next day. She later admitted to me that I was so funny that she seriously doubted that I would show up for work. At least she didn’t say that she thought I was crazy. I never missed a day in the four years that I worked for her.

During my last year at the beauty shop, I developed many anxieties. It became harder and harder for me to make a decision. When I could not find an understanding listener, I developed resentments, anger and sadness. I took my perceived troubles to work with me and burdened my clients endlessly. I was indecisive as to whether my daughters were still young enough to need baby sitters. Or, I wondered if it was fair to allow my mother to help out with them. One of my daughters told me that I was so manic at one point that I was wielding one of my husband’s guns and she had to take it from my hand. I do not recall that incident, but it happened before I was diagnosed as bipolar.

I bleached my own hair and my neck turned red from the chemicals. That is not unusual and I had often seen it happen. Yet, I panicked and saw a doctor who assured me that the condition was not a serious problem and was temporary. I dwelled on our Hawaiian experience as if I were the only person ever to have had the privilege of living there. I now realize that I was yearning to return to the happiest days of my life. It became more and more difficult to function at work and at home.

Finally, a client convinced me to see a doctor about my extreme anxiety. She even recommended a specific doctor. I told the doctor that I was suffering from mere nervousness. He performed a Pap smear and checked my estrogen level. A few days later he called to tell me that he would administer estrogen injection and prescribe birth control pills. Continuing on a downward spiral, I became more and more anxious.

My husband thought that a vacation would possibly help, so we set out on a family camping trip to Florida. We also invited friends along who owned their own camper. We traveled separately, but in tandem. Well before the vacation was due to end, I became so lifeless that we had to return home. Our friends were driving behind us when Karol was distracted by my constant talking and missed a turn. Our friends followed. We drove many miles out of the way on the winding mountain road. Even had there been a GPS available to us back then, my incessant banter would have drowned out its verbal directions. And Karol likely would have missed visual clues also because of my persistent, loud, arm-flinging tirade. He must have been dangerously stressed himself, and I was so frustrated and overwrought by our predicament that the first time the truck stopped, I jumped out and tore the road map into shreds.

The summer wore on and my depression deepened. I perceived myself as having insurmountable problems. I felt sad, empty, worthless, helpless and hopeless. Finally, I shared some of my feelings with the doctor who was monitoring my hormone levels. He said, “It sounds to me as if you are at the bottom end of a totem pole.” At his recommendation, I scheduled an appointment with a psychiatrist.

I attempted to pour out my whole life history in one hour on that first visit. On the second visit, I redoubled my efforts to convince the doctor that my worries were legitimate and overwhelming. He asked me to bring my husband with me on the third visit. Karol did go with me, although somewhat reluctantly. When the session ended, the doctor told me that Karol was on my side. He continued extolling my husband’s virtues saying, “Karol is a fun-loving person who is good for you.” Apparently the doctor thought a little marriage counseling would do the trick. He ended our session by admonishing me for being “just too serious.” I felt even more defeated and two weeks later I chose to quit my job.

Bipolar disorder held Ann in its strong grip for twenty-five years. She was regularly plunged from mountainous mania to deep, dark valleys. Suicide attempts and mental hospital stays were often followed by happy times with family and friends; although excess was often a problem. Persistent prayers of her own and others finally led her to a Christian psychiatrist. Her beloved “Dr. John” prescribed appropriate medication, and fine-tuned the dosage to achieve balanced moods. All the while, he worked to convince Ann to value herself.

Eventually, he began to patiently and tenderly coax her to recall and deal with the trauma that she experienced and repressed when she was six years old. Anger, guilt and hurt from myriad other life experiences had to be dealt with as well. Finally, and most importantly, guidance in spiritual formation set Ann free to resume her spiritual journey which was stifled by her illness early in her adulthood.

Her gripping story begins with generational issues and progresses through cultural and religious issues, mental and physical illness, love and forgiveness, and finally in recovery as near to wholeness as one could hope for. Ann’s story of perseverance and faith is told simply, but passionately. Her message is straight forward: God’s love and provision is an essential element of lifting one from despair to joy.

Ann Perkins, a perky grandmother, resides in Lexington, Kentucky. A former beautician and piano teacher, she is most proud of the childcare business that she operated for ten years before retiring. Ann passionately wants her story to provide hope and encouragement to the despairing.