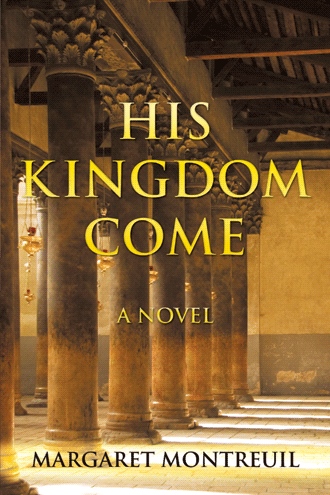 
This Passover in Jerusalem, a good many people wondered if Jesus from Nazareth was the Messiah. As for me, the man in question was my brother and, lately, I feared he’d lost his mind.

If everything were good and right, I’d stand and pray before the presence of Ha-Shem in the temple court. Instead, I stopped to listen, frozen in place just beyond the gate called Beautiful. A single, angry voice echoed from inside. I cringed with certainty. It was him.

I began to push through the solid wall of humanity that blocked my path. Festival pilgrims, like me, filled the entire court of Gentiles, the portico, and overflowed to the steps near the gate I’d just entered. “Let me pass! Forgive me,” I said in earnest as I worked my way through the bodies. Angry faces and rebukes met me, but I kept on. After awhile, I looked straight up to get my bearings. The high ceilings and majestic columns towered above me. I’d managed to force my way into Solomon’s Colonnade, the largest sheltered space in the temple where the scribes and rabbis liked to teach.

I knew, as did everyone, no one had ever seen so many people pack into the temple to hear one man speak. Strange, considering Jesus had been banned by the Sanhedrin from stepping foot in here.

I pressed on until at last I broke through the front line of listeners and caught my first glimpse of him. With his right arm raised and his prayer mantle slipping down from his head, I saw him from the back as he stood across from me at the other side of the gathering that surrounded him.

He faced a group of ruling officials and shouted: “Woe to you, teachers of the law and Pharisees, you hypocrites!” His right arm sliced through the air. “You shut the kingdom of heaven in men’s faces. You yourselves do not enter, nor will you let those enter who are trying to.” He looked down with a shaking head.

I almost rushed out to him. It would be impossible to get him away from here—and I would have to fight him as well.

My heart pounded with fear—so many leaders—I couldn’t count them all. They hadn’t come to hear him teach. What had they in mind to do? I wondered if this crowd stood between him and arrest.

What had so utterly changed him in three short years?

His voice called out: “Woe to you, teachers of the law and Pharisees, you hypocrites! You travel over land and sea to win a single convert, and when he becomes one, you make him twice as much a son of hell as you are.”

I covered my eyes. Adonai, make him stop!

I looked up in time to see him turn and step in my direction. He didn’t see me and I felt relieved knowing my face blended in with all the rest that stared at him. The vein in his forehead stuck out. Usually, this only happened when he laughed hard or when he strained himself.

He gave his attention to the chief priests, who were easy to pick out by their headpieces and the many tiny bells sewn to the hem of their robes. They stood together in a group to my left.

He began to pace back and forth. “You blind fools! Which is greater: the gold, or the temple that makes the gold sacred? You say, ‘If anyone swears by the altar, it means nothing; but if anyone swears by the gift on it, he is bound by his oath.’ You blind men! Which is greater: the gift, or the altar that makes the gift sacred?”

He turned around. Arms folded across chest, eyes cast down, he stepped to the center of the clearing. After a few moments of complete silence, he looked up and saw several rulers walking away. He went after them and shouted at their backs: “Woe to you, teachers of the law and Pharisees, you hypocrites! You build tombs for the prophets and decorate the graves of the righteous. And you say, ‘If we had lived in the days of our forefathers, we would not have taken part with them in shedding the blood of the prophets.’

“So you testify against yourselves that you are the descendants of those who murdered the prophets.”

Several chief priests turned around and stared at him, eyes wide. Then, at the top of his voice, Jesus yelled: “Fill up then!—the measure of the sin of your forefathers!” His voice cracked from emotion and strain. “You brood of vipers! How will you escape being condemned to hell?”

He pulled two of his disciples, the fishermen Simon and John, into the open space to stand beside him. “Therefore, I am sending you prophets …” He pointed at a scribe who was not with the others, a man I’d met before by the name of Judah, “… and wise men and teachers. Some of them you will kill and crucify; others you will flog in your synagogues and pursue from town to town.

“And so upon you will come all the righteous blood that has been shed on earth, from the blood of righteous Abel to the blood of Zechariah son of Berekiah, whom you murdered!—between the temple and the altar.” He pointed at the men and then the temple.

“I tell you the truth, all this will come upon this generation.”

The crowd had grown quiet, amazing considering how many people stood shoulder to shoulder. He’d surprised everyone in the place—including his disciples. I could see astonishment on their faces.

When he looked up, he spoke with a level but weepy voice: “O Jerusalem, Jerusalem, you who kill the prophets and stone those sent to you, how often I have longed to gather your children together, as a hen gathers her chicks under her wings.” He shook his head. “But you were not willing.”

I dazedly repeated his words to myself: “I will send you prophets ... I longed to gather your children together ...” No wonder the rulers have banned him from the temple.

My heart ached—my brother was not only in peril, he deceived himself and everyone who believed his ravings. Why the multitudes hung on his words, I couldn’t guess.

I turned to leave. I couldn’t bear to listen anymore. Behind me, I heard him say: “Look, your house is left to you desolate. For I tell you, you will not see me again until you say, ‘Blessed is he who comes in the name of the Lord.’”

We both left the temple then, in opposite directions. I turned in time to see his disciples trailing behind him on their way toward the eastern gate.

He would never be forgiven by the Sanhedrin after what he’d just done. Would heaven forgive? I thought about that for a second and then sighed. There was no way to reason with him. No stopping him. I’d tried. And now he’d gone way too far. Today’s demonstration was only a fraction of what he’d done this week. As I worked my way through the crowd, I considered everything.

The Agony of the Cross Loomed for Jesus …

“Our brother Jesus was on a reckless course and I had left Jerusalem because I was angry with love for him. I felt helpless to change him and terrified for his life.”


James and his brothers don’t know what to do with Jesus. Is their eldest brother the prophesied Messiah, or is he simply out of his mind? Soon enough, events in Jerusalem during Passover bring James and his family to their knees with sorrow: Jesus has been crucified.


As the family and followers of Jesus eventually encounter the risen Lord, they joyfully come to believe in him as the promised Messiah. But their own Jewish leaders want to stamp out the “heretical” believers—and the high priest, Caiaphas, takes extreme measures and enlists a young Pharisee named Saul to begin a violent assault against them. In the face of threats, persecution, and death, James, John, Peter, and the rest of the church must rely on raw and untested faith to overcome fearful times and carry out Jesus’ command to build a kingdom that will change the world in his name.

See Christ’s final weeks on earth through the eyes of those closest to him. Witness the early church’s exciting first days—and then its struggle to remain. Take an up-close and intimate journey into first-century Israel in …

Margaret Montreuil’s past years in a Messianic congregation, her visits to Israel, and her in-depth historical research, has helped her describe the primitive church in Jerusalem. Author of God in Sandals, this is her second New Testament biblical novel.