Survival in A Hostile Environment

What to Do When Your Boss/Colleagues Want You Dead 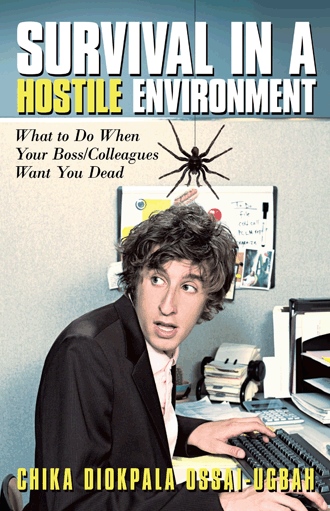 A hostile environment exists when a person experiences harassment and fears going to work or being in a place because of the offensive, intimidating, or oppressive atmosphere generated by the harasser. When the employer, superior or tutor creates or tolerates a hostile environment directed at you, that person might be trying to force you to quit, compromise, condescend or brake from your principles and patterns of living. Beware. A hostile environment presents itself when unwelcome conduct unreasonably interferes with an individual's academic or work performance or creates an intimidating or hostile academic or work environment, even without tangible or economic consequences. The critical inquiry in a hostile environment case is that the conduct is sufficiently "severe or pervasive" to create an abusive academic or work environment. Most hostile environments include atmosphere of suspicion, uncomplimentary language, unwelcome sexual advances, requests for sexual favors, and other forms of verbal or physically harassing conduct. An atmosphere is hostile when such conducts, actions and attitudes have the purpose or effect of unreasonably interfering with an individual's person, passion, purpose and peace. A hostile environment exists when these unwelcome, unwanted, or offensive conducts interfere with an individual’s work or academic performance, or create an intimidating, hostile, or offensive working or learning environment. Unless conduct is egregious, a single or isolated incident of offensive conduct generally does not create a hostile environment. It generally requires a pattern of offensive conduct or offensive language inimical to performance of one’s duty or assignment in a place. Similarly, in quid pro quo cases, a single incident will only constitute harassment if it is linked to the granting or denial of academic or employment benefits. Harassment carries a bad intent on the part of the harasser. David was living or rather working in a hostile environment but he did not know it. Saul was troubled with an evil spirit and the mastery of music by David became a soothing balm against the demonic attacks. While David’s work was worthwhile, David was considered a threat by Saul. This was because of the supposed praise sung by women when he was returning from the victory over Goliath. Though it was a victory for David, it was indeed a victory for Saul in particular and Israel in general. David was living dangerously because he could not interpret his circumstance. David saw that to survive in a hostile environment, the first key is open your eyes and ears to know where one is. Do not walk with your eyes and ears closed. Open your eyes and ears to the sights and sounds of where you are. Do not be like the proverbial Ostrich; do no bury your head in sand. Watch out for causes of a hostile environment.

This book enables persons to recognize possible budding signs of hostile environments. The book also commends itself to individuals in positions of authority or leadership to watch their thoughts, words and actions, lest they constitute hostile environments, even if inadvertently, to their followers, staff, students and neighbours. The book avers that life is full of political intrigues and that the work place is a proper arena for testing one’s ability to survive. It teaches several principles for surviving the hostile environment.

Chika Diokpala Ossai-Ugbah, Ph.D is the Senior Pastor of Covenant Life Baptist Church, Ugbowo, Benin City. He is an Associate Fellow of the Insitiute of Chartered Mediators and Conciliators from where he earned ChMc. Chika is a graduate of Harvard Kennedy School of Government, L21 Spring, 2012. He is involved in seminars to train workers and develop skills for relations. Together with his wife Ngozi they run Living Oracles International Ministries: a ministry dedicated to human development through arming people with skills for decision making, proving direction and deliverance from spiritual obstacles that can hinder physical and spiritual progress. Chika is an ordained minister of the Nigerian Baptist Covenantion. A verstile speaker and conference facilitator. He holds an NCE (Agbor); BA (Ibadan); B.TH (Lousville); MTH (Ogbomoso), MA, Ph.D (Ekpoma). Chika lives in Benin City, Edo State, Nigeria where he pastors Covenant Life Baptist Church, Ugbowo, Benin City. He is married to Ngozi, and they are blessed with a Son: Ashimamaka and a daughter: Uchebuaku.