Just a Spoonful of Laughter Helps the Medicine Go Down

A series of short stories that will make you laugh, maybe even cry, and hopefully make me a lot of money. 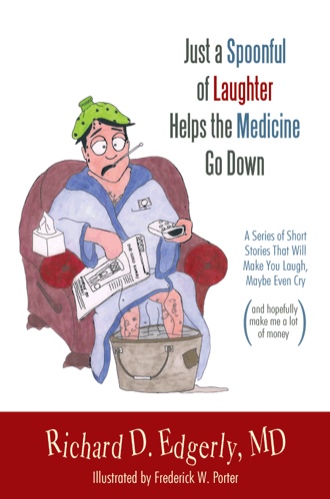 The mother-in-law. Now there’s a title that invokes a little trepidation in most men, I am sure. It’s not fear that most men feel toward their mothers-in-law but, perhaps, angst is a better word. My mother-in-law is different. Well, not really. I just wanted to say something nice about her but lost my train of thought. ,br>

Several years ago she gave birth to my wife, soul mate, and mother of the best three children in the world. And for that, she will get free medical advice for the rest of her life. But that doesn’t mean that I can’t use her as an example or make fun of her, as I often feel free to do.


She was born in the depression. She must have been for she doesn’t spend more than a dime on anything that might make her life a little more comfortable. Society always blames this behavior on the depression even if the person wasn’t even alive at that time. She was born in 1929 and, I suppose, that does qualify her here. She is not a miserable person really. She just makes life more miserable than it has to be. And unfortunately, you usually get caught up in her misery too. Maybe she’s this way because her parents died young and she was left to be raised by wolves. Not literal wolves, of course, but I’ve met a few of her relatives and the resemblance is scary.


The most difficult part of providing care for her is that it is like practicing veterinary medicine. My mother-in-law has zero communication skills. She won’t tell you what the problem really is. She just lays there, suffering, and keeping everyone in the surrounding county awake and on the edge of their chairs wondering whether they should call an ambulance or dial 911. “Don’t let me bother you. I’ll just suffer through it. That’s what we did during the depression.” Even a non-verbal head movement would help through the interrogation process. Instead, her head movement is more of a yes, no, circular motion. My kids say it is the inspiration behind the original bobble head. I give up.


I get children in the office this way. The parent is saying, “Just tell the Doctor where you’re hurting, Jenny.” There is just silence, no motion. I ask her to just point to where she thinks she is sick. “Is it in the head, the throat, the chest, or the tummy?” Complete silence. No gestures. No communication skills. A future mother-in-law, I am sure.


The worst part of this ritual can be the accolades that are poured out after the treatment. It’s laid on so thick it could choke a horse. All that relief she could have had days earlier if she had just gone to the drug store and spent $3 in the first place. But what happens three months later when she starts getting more symptoms? That’s right, nothing. She just starts suffering through it. After all, that’s what they did in the depression.

Just a Spoon Full of Laughter…is a great read for anyone that’s been to a doctors office and made it out alive. Written by an actual physician, it will keep you in stitches (no pun intended) from one story to the next. See for yourself what could be so funny about the physician office visit. Whether it’s recalling his first sigmoidoscopy or performing an autopsy, you’ll keep this riveting series of short humorous stories right there in the bathroom for pleasurable reading. You may even find yourself somewhere between the pages. From an author who will never be a New York Times Best Seller, it’s a great book for young or old, male or female, professional or not. It’s especially ideal for that person in your life who has everything except a sense of humor. It’s ideal as a stocking stuffer, white elephant gift or for future yard sales.
“The funniest book I ever read.” Says Dr. Zhivago
“Yes! Yes! Yes!” Says Dr. No

Dr. Edgerly MD, is a Board Certified, Christian, Family Medicine Physician who practices in rural Washington State. Always appreciating what a little humor does to freshen the soul, he has written a collection of stories that have occured over the years in his practice and he hopes that they will also make you laugh. He majored in Bacteriology and Public Health at Washington State University before pursuing a career in Laboratory Medicine and then Medical Business Management. After losing his mind, he entered medical school at the University of Washington School of Medicine. He is married and has three wonderful children who are starting families of their own.