An Abbreviated History From Androclus to Constantine XI 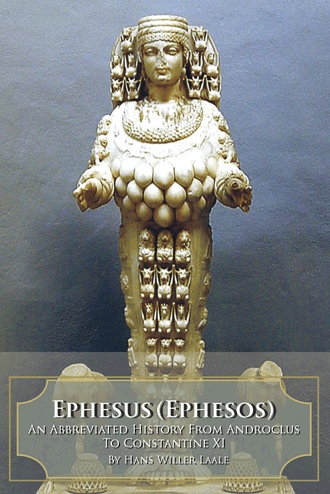 Ephesus (Ephesos): An Abbreviated History from Androclus to Constantine XI. The reader is provided with what is known about the city of Ephesus, its people, and its place within the larger framework of ancient and medieval Mediterranean history.

Beginning with the Ionian migration and the founding of Ephesus on the west coast of Asia Minor around 1050 B.C., the story moves quickly through periods when the city was ruled successively by local tyrants, Persian kings and satraps, Athenian and Spartan generals, Antigonid, Ptolemaic and Seleucid kings, Roman emperors and Pergamene dynasts, Byzantine emperors and Greek patriarchs, Arab caliphs, Latin popes and crusaders, Seljuk and Beylik Turks, Mongols, and ending with the conquest by the Ottoman Turks in A.D. 1453.

Throughout emphasis has been placed on the lives of Ephesian individuals and groups, and their respective contributions to architecture, law, literature, painting, medicine, philosophy, poetry, politics, religion and sculpture, often at times characterized by political and territorial power struggles and ecclesiastical doctrinal controversies and disagreements.

The history of Ephesus is of ongoing interest to historians, archaeologists and students of classical literature, science, religion and philosophy, as well as to amateurs and laymen who are keenly interested in Mediterranian antiquity. It is documented with excerpts, biographical references, explanatory footnotes and a few illustrations.

Hans Laale was born in Copenhagen Denmark. As a young man he immigrated to Canada. He studied at the University of Western Ontario and then at the University of Toronto. From 1967 to 1996 he served as Professor in the Department of Zoology at the University of Manitoba where he taught Vertebrate Embryology. He is the author of many scientific papers and reviews, and has authored a book on the pre-Socratic philosophers of Miletus. Now retired, he lives in Coquitlam, Britist Columbia, Canada.