In The Keys to the Bottomless Pit 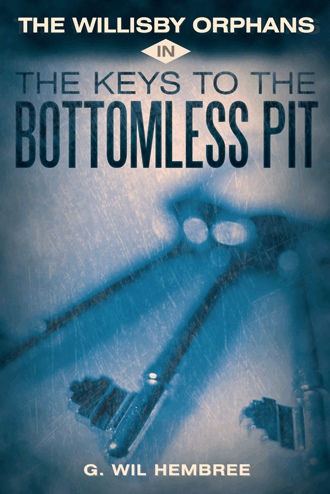 ZAP! Lightening smacks a nearby tree, a limb crashes, and gravestones flash in the brilliant light. All eyes look up and watch the billowing clouds linger, threatening the bright blue day. BBBOOooooommmmmmmmmM! Echoes across the sky rolling in a bottomless chamber of multiple deep groans. The sound is eerie and the air is thick with suffocating humidity. Everyone is uncomfortable. “I don’t want to do this.” Kramer Willisby whines and tears stand in his eyes. “I’m scared.” So is fifteen year old Katlyn. “Well, we have to, Kramer. Straighten up!” She’s harsh and Kramer kicks her in the shin. “Ooouch!” Katlyn grabs her leg, looking around at dozens of people she doesn’t know. She clutches Kramer closer to her as if she can shield them from the day. Unseen to the human eye, a spiritual world, magical and mystical lurks within the seconds of time. Invisible. Eternal. Forever hidden within layers of dimension and chance. Forces in the air, unseen by all, waging a war of cunning ruse that most don’t notice or simply excuse. BBBbaaaaammmmmmmM! The ground shakes and everyone jumps at the sound. The earth trembles and moans. Few people glimpse all that is going on around them every hour and every minute of the day. To the naked eye, the sun rises and sets, and people go about their normal, day-to-day routine unaware when the winds grow loud or a breeze comes, that spirits float about with swords drawn, and flaming battles swirl around them seeking their soul. And so it is with Katlyn and Kramer Willisby as they stand at their parents’ grave surrounded by strangers.

The Willisby Orphans weaves a grain of truth into a rip-roaring tale of twists and turns in the very real and present danger of spiritual warfare. Over two thousand miles from home in a small town in Tennessee, Katlyn and Kramer Willisby are suddenly orphaned, scared, and alone. Their future is uncertain.

The holy Forces of Light warriors wage war with Satan’s Unholy Evil Legion for the Willisbys’ souls. Flaming battles and clashing swords swirl around the unsuspecting fifteen-year-old Katlyn and eight-year-old Kramer. Everything goes wrong, and the watchful eye of the State and daily survival is a constant fear. They don't know what to do without an adult in charge.

Margaret Willisby is born from accidental necessity with a wig, fake glasses and big, ugly shoes. Their only surviving relative is a stranger. Aunt Grace is a forgetful, eighty-eight-year old who never realizes the orphans are orphans nor does she know they live in her upstairs rooms, and Aunt Grace doesn't know that Margaret Willisby isn't real.

Danger lurks at every turn, compliments of Satan’s UEL fiends, but God’s Forces of Light warriors fight the UEL, despite Divine Intervention Restrictions, trying to protect the Willisby orphans in an explosion of mystical, spiritual truths.

Does a spiritual world lurk within the seconds of time? Are spirits hidden within layers of chance, invisible and eternal, in a war that has always been? Is there a mission of good versus evil? Do angels and demons exist?

Watch the Willisby orphans unknowingly caught in a war that has waged since time began as Katlyn and Kramer question their strange and ill-fated future.

G. Wil Hembree lives in southeast Tennessee and is a small business owner. She holds a master’s degree in business, a bachelor’s degree in nursing administration, and is a lifelong student of the Bible. She has four children and six grandchildren. This story was spoken from a child’s vivid imagination and questions about the evil present in our world. Declining public schools’ abilities and willingness to promote Christian fiction along with decreasing exposure of children to Christian principles propels the author to write quality fiction that feeds the mind, spirit, and soul.