Out of the Abyss

Can the number of the beast be solved? 666 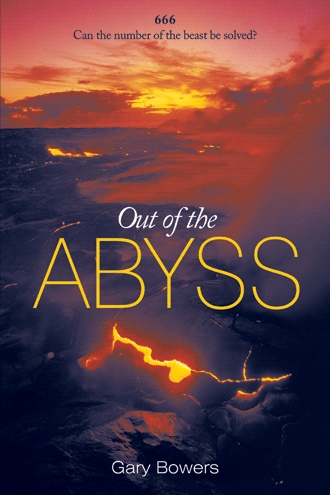 CHAPTER 13
AN EYE-OPENER FROM THE BOOK OF
REVELATION

On a momentous (for me) night in November, 2008, I huddled near a battery powered lantern in the bedroom of my mobile home located on some remote acreage in northeast Arizona. Though I could have had more illumination from generator powered light bulbs, I chose to save generator gas. Plus, it’s kind of fun; reading from the light of a lantern invokes a mysterious and nostalgic image of our pioneers in their log cabins at night, with only a kerosene lamp to read by. Or, picture if you will, the early Christians reading the newly distributed scroll of Revelation, next to a flickering candle that cast eerie shadows on the wooden table and stone walls of their homes.
This land in Arizona is a five-hour drive from my home in the Phoenix area, and I periodically use it as one of those get away places. You know: the R&R thing. My Bible was on my lap and I was reading from the book of Revelation. My normal practice is to read from the Old Testament at night, New Testament in the morning (devotions). For some reason that I can’t recall, several years ago I began to read exclusively from Revelation before retiring, while at this retreat.
At first, I would read Revelation the way any book should be read, from first chapter to the last chapter. At any given session, I would sometimes read several chapters, and sometimes only one chapter or just a few verses. It all depended on how long I read or how much concentration I could maintain or how much contemplation I spent on any given passage. But somewhere along the way, I began to read whatever portion of Revelation that came to me.
That night in November, I had begun reading in Revelation Chapter 17. During a previous trip to the land, my reading had included Revelation 13, the chapter that contains the infamous “mark of the beast.” I even recall talking to the Lord aloud. Something to the effect, “Lord it would be pretty neat if someone could figure out this number (666) once and for all. But, I suppose there’s really no way to know for sure.” I did not specifically ask the Lord to show me or give me understanding of this bewildering number; frankly, I didn’t think it was knowable. I just remember thinking and saying how special it would be if we could know—what is tantamount to wishful thinking. It was more like: just a hint Lord?
As indicated, I had begun reading that November night in Revelation Chapter 17. Keep in mind that I had read this chapter, indeed, the entire book of Revelation many times before. Nothing different jumped out at me until I got to verse seven: “Why are you so amazed?” the angel asked. “I will tell you the mystery of this woman and of the beast with seven heads and ten horns on which she sits.” Incidentally, that is how Revelation Chapter 17 begins … a provocative description of the woman on a scarlet beast.
I thought: wait a minute. For all practical purposes, the angel essentially told John not to be overwhelmed or to think that these things could not be known with any degree of finality. At the time, I wasn’t thinking of my session in Revelation 13, two or three weeks earlier. I didn’t make that connection until later.

I didn’t have to go very far. The very next verse absolutely bowled me over. In fact, it was only the first sentence of verse 8, consisting of ten words. “The beast you saw was once alive but isn’t now….” “What!” I yelled aloud. Like the blessings and miracles I shared with you in Part I, there were goose bumps, a dropped jaw, and this shout of exclamation. To make sure, I read it again and again. It had always been there, but I had obviously skimmed over it and missed the significance. Actually, it’s a phenomenon more than merely missing the meaning. That’s the way God’s Word and the Holy Spirit work. Suddenly he jolts us with an understanding we didn’t think possible; with unforeseen illumination from that specific passage at that particular time.
Within a few days I realized that this insight would require a departure from my own view of a modern-day Antichrist, which had been shaped by and tracked with the current view of many prominent students and teachers of Biblical prophecy. Thus began the research journey that would take me to kings and kingdoms, inside the earth, sea, and the Abyss, and through ancient records, both sacred and secular.
The words shook me like a magnitude 9.0 spiritual earthquake, but it was more than just the words, “The beast you saw was once alive but isn’t now.” The repercussion was profound but plain; covered yet clear-cut. This particular revelation was being given to John in the present time.
“Of course it was,” you say. Bear with me. We know that Revelation was, for the most part, prophetically future in John’s time and, since Christ has not returned yet, in our time. Yet, we also know that the seven churches in Revelation Chapter 2 & 3 were actual churches in Asia Minor; therefore, we understand that the church letters given by Christ to John were meant primarily for those churches at that time.
But beginning with Chapter 4 we tend to think of everything in Revelation that ensues as future tense, during and after John penned the words and visions given to him by Jesus and by angelic messengers. Consequently, it’s easy to overlook or discount words or phrases that are clearly past or present tense. This is particularly true of “be” or “to be” expressions in such words as is, was, am, or will be. We frequently use these English words in talking and writing. They are derivatives of the word be, which explain the concept of existence and being and the tense (time) of that existence. Okay, enough of the English lesson; however, I was trying to reinforce the vital importance of the small connecting words of a text, especially when reading something prophetic.
The future would be clearly contextualized by the word, “will” (will happen) which is used extensively throughout Revelation. For example, later in this fairly long verse 8, it says, “And the people … will be amazed….” But this and all of the other specific revelations conveyed to John were given on a particular day at a specific time of that day. In Revelation 17, the angel is unraveling the mystery of this beast to John based upon what John had just seen. And so, the angel says, “The beast you saw….”
Verse eight continues, “…was once alive but isn’t now.” For emphasis and clear understanding I will give you a two-question test. The first question: When is “now?” Perfect, you got it right. It’s the exact hour and day John is hearing this from the angel. Listen closely now. This is what the angel is telling John: The beast (man) had been alive before John saw it at that particular point in John’s life. But, the beast was no longer alive, at that same precise moment in John’s life.
Second question: When did the beast die? Answer: before John saw the beast and before the angel explained the beast to John. Well done, you got 100% on this test!
Okay, I don’t mean to be elementarily oversimplified here. On the other hand if it was that simple, why had I and a host of Bible pastors, teachers, scholars, and students of the Bible missed this and/or dismissed the significance of it? Part of the answer is: We assemble a puzzle one piece at a time. This is one of those pieces that apparently must be refitted near the completion of the prophetic puzzle, near the very last days before our Lord’s magnificent return.
Notice, the angel doesn’t begin by explaining the things that the beast will do or the reaction of the world to the beast, or any other details until he gives John this brief but extraordinary introduction to the beast’s biography. It would be like you telling a friend about someone you once knew. You might begin by saying, “He passed away….” ...

The Apostle Paul branded him the “man of lawlessness.” The Prophet Daniel marked him as a “little horn,” and a king. John, the author of Revelation, stamped him as a “scarlet beast.” The Apostle John labeled him “Antichrist.” Many left behind after the Rapture will be amazed and terrified at his mysterious, yet miraculous reappearance.
Who is this troublesome figure that will pervert all that is good and decent and right? Is it possible to solve the number of the Antichrist before he appears? Does the Bible promote or even permit identification of this man of sin who will personify and epitomize the Mystery of Iniquity? Both believers and non-believers have been perplexed and intrigued with these questions for centuries!
This book will propel you on an unforgettable voyage to the ancient Roman world, to the very origin and lair of the beast, to the 1st century Church, to the Abyss and back again, to the preemptive death and eternal destruction of Antichrist, to the mesmerizing visions of John, Daniel, and Zechariah, and to high level heavenly counsels. Out of the Abyss will expose and declassify that which has been concealed and classified. To wit: the secret of the beast presumed to be confidential until the body of Christ is taken from this earth.
You may not agree with where the journey takes you, i.e. with the conclusions reached. But with all his heart and utmost conviction, the author believes you will enjoy the trip. He proposes that, at the very least, you will be fascinated with the relevance and application of Scripture to some of the most astounding events in human history, both past and future. You will take part in and be enthralled with a partial refitting of the prophetic puzzle.

Gary Bowers is the author of O Israel, a gripping novel set just before and during the Tribulation. While writing a sequel to this novel, the Lord provided an amazing disclosure from the Book of Revelation. Immediately the book switched to non-fiction, resulting in an extraordinary refitting of the modern prophetic puzzle.