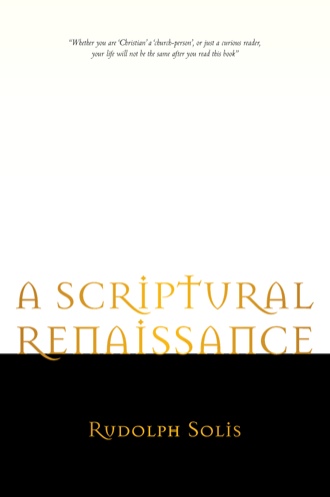 For eons folks have been making mean personal sacrifices to 'pay tithes' to preachers and churches; even to the extent of neglecting to pay their necessary living expences, like rent, utility bills, etc; all because they are subjected to being beaten over the head with the Bible in order to engender within them a guilt-complex; when, all the time, there is no Scriptural Foundation contained within the pages of the Holy Bible to support the paying of 'tithes' by the New Testament Believer in Jesus, The Christ.

"A Scriptural Renaissance is not your regular run-of-the-mill Bible-basher" In fact, this book challenges all those who think that they are familiar with the Holy Bible to take a new look and see what Religion has done to undermine Almighty God's original purpose in providing Man with His Manual for Life!"

1. After having been born again away back in 1967, I developed an insatiable hunger for the Scriptures; which led me to a serious questioning of those things which I had been taught from childhood in the Roman Catholic Church. This questioning, which yielded no satisfactory answers to me, led me into a deeper and more intense study of the Scriptures and a firm decision to pursue theological studies at the first possible opportunity. Ordained as a Pastor in 1976, my opportunity to formally study the Bible came; and, after seven years of study, during a period of pastoring, in 1992, I received a Masters Degree in Theology from the New World Theological Seminary in Texarkana, Arkansas. 2. Rather than lapsing into complacency, after having been qualified, I discovered that my studies forced me somewhat into an even greater desire to search the Scriptures more thoroughly; since during the times of my pastoring and other ministerial activities, through questions forwarded to me by 'trained' ministers and untrained believers alike, I became unsettlingly aware that many of the things which so-called Christians believed and practiced really had nothing at all to do with Almighty God or the Bible; and furthermore, I realized that, for many, what is referred to as 'the Church', is, more often than not, considered to be synonymous with Almighty God and Jesus, The Christ. This findings proved to be a 'wake-up call' for me, the result being an even more intensified study of the Truths of the Word of Almighty God, The Holy Bible. 3. New York (in the Bronx) where I live for half of my adult life, has proven to be a singular experience for me in all facets of my life, particularly the Spiritual; my being an immigrant from Belize in Central America. A retired teacher and widower, I have purposed to spend much more time writing of those things which have been revealed to me in the Scriptures for the edification of those who are of a mind to learn the Truth as Almighty God will have them know it from His Holy Word; with a view to correcting many, or all, of the vexing problems which plague the Church and the lives of those who sincerely want to walk with Almighty God according to His Will.