Rivers of Darkness, Visions of Light

From Extortion to Salvation

by Larry A. Whited 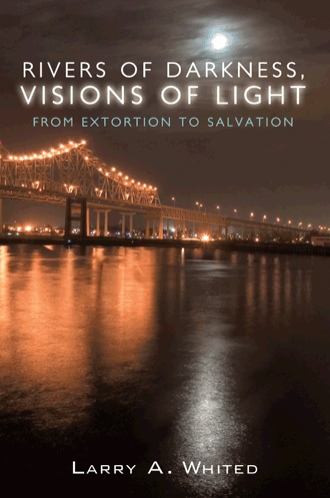 It had been less than seven years since I had decided to risk all without knowing how that fateful day would end—that was the day when I had performed the pick-up and escape for the extortion. Then, as now, I did not know if I would be returning, except back then I had a fair amount of misplaced confidence that I was in control. This time, I had no illusion of being in control. I committed the day to the Lord and submitted myself on my knees to His will and His purposes. With having no idea of what to expect, I locked the gate to my driveway and began the drive to the Federal Bureau of Investigation offices in New Orleans for a meeting with those whose property I had damaged in my extortion attempt and those whose lives I had threatened. I did not know if the representative from the telephone company or the FBI Special Agent I was scheduled to meet would have direct prior involvement with the case, but clearly these two men and possibly others would be representing those whom I had wronged.

On June 3, 1980, I had typed a letter to the General Security Manager at South Central Bell in New Orleans, setting the process in motion. I had taken steps to learn his name before writing the letter to ensure that the proper person would receive my confession, but for privacy concerns I will not now reveal his name. The first paragraph, unpolished and as written, had read: “This letter must necessarily be personally addressed to you in your position of responsibility and authority at South Central Bell. You may question my credibility, for what I am going to relate to you will result in serious incrimination for me. I am now asking you for your time to consider what I have to say. I regret terribly the actions I have committed which require this letter to be written.”

The second paragraph, in its entirety, read: “Several years ago I committed a serious crime against your company. There was no injury to any of your personnel, but there was property damage. This was not an act of vandalism, but instead a deliberate planned attempt to extort a sum of money. The attempt was not successful. I am hesitant to relate the details of the crime in this letter, although I will provide you with any and all pertinent information when you inform me of how this should be accomplished. I would prefer to meet with you in person at any time or place you would choose. Mine is not the bargaining position though, and it is your instructions I will follow. I fully realize that this letter may leave you with no alternative but to contact law enforcement officials and that what I have today set in motion may result in my arrest and prosecution.”

The letter had not been written easily, and it was important for me to try to get it right. It was difficult to explain in one page why I was coming forward at this time, but they deserved an explanation and God deserved the credit. The third paragraph continued on: “To give you an understanding of why I am now coming forward, I must necessarily tell you of certain changes in my life. I am not a ‘professional confessor’, nor am I psychologically unstable. However, I was a spiritually lost young man at the time of the crime, and have since been spiritually awakened. For over a year now I have been a Christian and I have sought to do as Christ would lead me. I have the Scriptural assurance of the Lord’s forgiveness in this matter, but I also have the stern admonition to provide restitution to those whom I have wronged. I fully acknowledge my guilt and regret my actions. Confession and restitution are necessary matters to be dealt with. Also, if prosecution results, then I must accept this as part of the penalty.”

I felt it inappropriate to ask for anyone’s forgiveness—I had no right to do this and place on another person the burden of far higher standards of compassion than I had displayed at the time of the crime. I also didn’t want the letter to read as if it was self-centered psychological guilt that was prompting my confession, but rather spiritual responsibility and a total awareness of my accountability. This was not to alleviate a guilty conscience even though I was still shamed by my previous actions—my guilt in this sense had been covered by the sacrifice of Jesus Christ even though there still might be repercussions for me in this world. Instead, my confession was to address my spiritual and moral responsibility.

The last two brief paragraphs combined read: “I am sorry for what I have done. I apologize with the sincerity of spiritual conviction. I would like to discuss this matter with you and provide you with any necessary information you would require for your decisions. I do not have, nor do I want, legal counsel. The terms of restitution are yours. I just don’t know what else to say…I await your response.”

On Friday, three days after mailing the letter, my phone rang: “Larry, this is ___ ______ with South Central Bell. I have your letter.” The strong voice on the other end was resolute and clearly that of someone in authority.

When I had first sent the letter, I was not completely sure if I was providing enough information to pin down the incident. I need not have worried; there was no question during the phone call that we were immediately on the same page. The conversation was brief, almost cryptic in how we both addressed the situation. Although our discussion stayed on the perimeter of the incident, it seemed as if we were discussing something that both of us had wrestled with at length. With a hint of controlled sarcasm in his voice he mentioned that he would have preferred a handwritten letter—an obvious allusion to the handwritten extortion letters that I had sent almost seven years prior. I knew immediately what he meant, both regarding the reference to my having typed the letter of confession rather than handwriting it, and now to his having to deal with the person who had committed the crime. This was a man who instinctively knew that I would not need his subtle comments explained to me. This was also a man who understandably did not like me. He instructed me to be at the FBI offices on the following Tuesday morning where I would meet with him and an FBI Agent. No details were offered about the nature of the meeting or the possible outcome. I was told to be there at 9:00 in the morning, and that was all I was told.

The drive across the Lake Pontchartrain Causeway and into downtown New Orleans early that morning on June 10th of 1980 gave me additional time for solemn reflection. I wondered if I was going to lose my freedom and be stripped of all that I had—if I would find myself subjected to a legal system that could essentially do with me as it pleased. At the same time, I knew that I was not alone, that it was God who was directing my steps and that He could have purposes in this that I had yet to understand. I wondered if I would become one of the prisoners who would be seen as genuine in his faith and one whom others could confide in, or if I would be ridiculed as a lightweight. At the same time I wondered if they would even prosecute me at this stage. I also had no idea what the terms of restitution were going to be regarding the property that I had damaged—and I knew that if they were to bill me for investigation costs that I could be indebted for life. I was fully aware that this could be the end of my life as I knew it.

Rivers of Darkness, Visions of Light: From Extortion to Salvation is the true story of an extortion attempt and of the life that both precedes and follows the decision to commit the crime. The story involves a maze of psychological and spiritual twists to maintain an element of growing suspense throughout.

This true account is told with an unusual transparency, revealing normally hidden personal thoughts, vulnerabilities, and motivations. The first chapter opens with a glimpse into the tormented mind of a young child separated from life and love, and the second chapter has the reader swimming along with the author in the Mississippi River for five miles in a daring nighttime operation to pick up a packaged bundle of cash along a New Orleans riverbank. Action follows with the site being under continual and hidden surveillance by a seven-man team headed by the FBI.

The story then reverts to the events that helped shape the life that brought about this crime, and a chronology unfolds throughout the next fourteen chapters that affords a view of human nature that is painfully honest, at times disturbing, and eventually uplifting as reconciliation with God and man is achieved.

This is a story of one man reaching out to God, his finding only walls and silence, and his acting out of an absolute sense of futility and frustration. Then, when least expected as that life finally seemed to come together with a notable measure of success as a commercial deep sea diver in the Gulf of Mexico, the real story of life begins. The reader gets a front row seat with an unobstructed view to see how a life plays out when a person first rejects and then ultimately receives spiritual light.

Larry Whited is not the kind of person that if you were to meet you would suspect in any way that he was ever capable of being so far on the opposite side of the law. Indeed, even at the time of the events described in Rivers of Darkness, Visions of Light: From Extortion to Salvation, not one person would have ever imagined that he would so deliberately cross over all the boundaries of decency that he otherwise respected. One wonders how and why such things could have happened, and in his telling of this true story all the questions are answered.

This story has been told in such a way that the reader is not caught up in the author’s presence, but is instead gently introduced to God in His quiet majesty, and therein is the value of this powerful story of redemption.

More information about this story, including excerpts from the book and photos, can be found by visiting the author’s website at: http://RiversIntoLight.com/