I Love You! from the Heart of the Father

God really does love you, yes, "YOU," whoever you are! 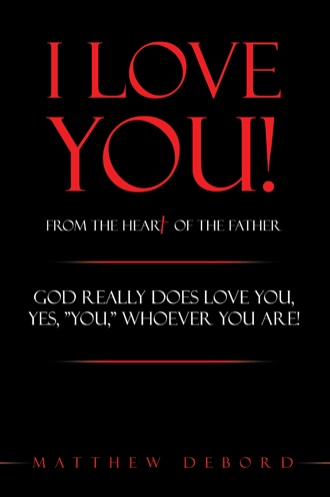 Why do you suppose God “makes his sun to rise on the evil and on the good, and sends rain on the just and on the unjust” (Matthew 5:45 - ESV)? Is it not to demonstrate His TRUE LOVE for ALL people? Read the “inclusive” nature of God’s will in Isaiah 56:6-8 (NASB). Not only was the Lord willing for “foreigners” to “join themselves to the LORD,” but He also referred to His own house by saying, “My house will be called a house of prayer for ALL the peoples” (56:7d). Do you believe God really meant this? Do you believe that God meant that there was to be a place where ANYBODY could come and have close communion (“prayer”) with Him? I believe it because God’s Word proclaims it over and over. This is the spirit of the Word and of Christ and of the Gospel. Whoever YOU are, God has made the access to His throne of grace available to YOU, too! Just in case you do not think that God was very serious about this matter of His house, let’s look at what we usually call the “cleansing of the temple” in Matthew 21:12-17. Why was Jesus so bold to “cast out” those buying and selling? Because this particular place in the temple, the court of the Gentiles, was that arena where ANYBODY in the world could come and seek and know the one true God. And Jesus was very upset that this avenue of life was being destroyed by those selling merchandise, so He drove them out! He wanted all people, people just like you and me, to have an avenue of faith and hope, where they could freely come to God, know Him, and relate to Him. What a joy it is to offer the gospel to ALL men, knowing that this is indeed the message of the scriptures. II Corinthians 5:18-21 (NASB) makes it very clear that as ambassadors for Christ, our ministry of reconciliation is to share the fact that “God was in Christ reconciling THE WORLD to Himself.” Is God, or is He not, actually “entreating through us” men to be reconciled to Himself (II Corinthians 5:20)? According to this passage, we are to “beg” men to get right with God. Again, is God offering a lie to some men through His ambassadors? Calvinists believe that some of “THE WORLD” have been predestined to hell, and therefore cannot be reconciled no matter how much we “beg”. If that is true, when we beg this portion of men to be reconciled to God, we are offering them a lie on behalf of God! Is this how we are to represent God? Is God “entreating through us” a lie when we witness to some men? Certainly not! “God WAS in Christ, reconciling THE WORLD to Himself! Each person is and can be invited with all honesty and truth! Speaking of John the Baptist, John 1:7 (HCSB) says, “He came as a witness to testify about the light, so that ALL might believe through him.” Can you imagine the joy that flooded the heart of John the Baptist? He had been preaching as the forerunner of Christ, calling people to repent, and telling them about the coming Messiah. Then, appearing through the crowd, there He was, and John had the thrill of personally pointing out the Lord Jesus Christ! He said, “Behold, the Lamb of God who takes away the sin of the world!” (John 1:29 - NASB). What a statement! What an introduction! What a relief to have delivered the message, expressed the truth, and heralded the promise. And there stood the TRUTH and the PROMISE in the Person of Jesus Christ. Yet what a heart break to know that there are some who would reduce that incredible introduction at the Jordan River to, “Hey guys, look, there’s Jesus, who takes away the sin of some of us!” Oh, listen, if that were the case, those for whom He did not die would have to look for another Messiah, another Savior. But, friends, there is only One! “For there is one God, and one mediator also between God and men, the man Christ Jesus, who gave Himself as a ransom for ALL” (I Timothy 2:5-6 - NASB).

Does God really love every single person? Am I included on God's invitation list for salvation? How can I be sure? Well, let's ask Him! Man has varying opinions on this subject, so let's go to the Source, God Himself. The Bible says every word of God is pure and it declares that God cannot lie. Therefore, let me assure you that, according to God's Word, God really does love you, yes, "YOU," whoever you are!

Matthew DeBord is the son of a Baptist Preacher and has himself been preaching full-time for 24 years. His great grand-father was an "old time" Baptist preacher. Matthew was formally educated at the New Orleans Baptist Theological Seminary. With such a rich heritage and well-founded education, he boasts truly of only one thing, the joy and fullness of knowing Jesus Christ. Walking with the Lord and feeding upon His Word is his greatest wealth. With all Matthew has experienced in Christ, he still believes we just scratch the surface of all their is to know and experience in relation to this awesome God. One of his greatest pleasures is to share truth from the Word of God so that others will become acquainted and fascinated with the Almighty Creator. This book covers one essential subject he so desires for people to know, the Love of God in Christ Jesus. Having lived in Louisiana and Mississippi most of his childhood and adult life, Matthew now resides in central Alabama where he is the pastor of First Baptist Church, Clanton, AL. He and his wife, Kay, have two children, Julie, and Timothy. It is their blessing in life to serve the Lord.