To Timbuktu and Beyond 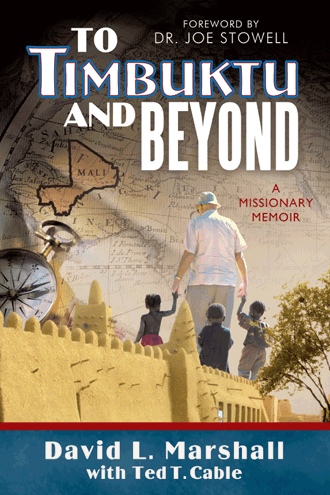 We arrived in Kemacina along the side of the Niger River where we stayed in a campement over night. I reported to the Commandant that evening and informed him that we would be leaving early in the morning. Vehicles were warned to check in and report their intentions of driving across the desert so the commander could advise the next commander by radio that someone was coming. Only one or two vehicles a month would take this difficult trip. During the night we had a hard rain storm. As planned we left early in the morning and after going for an hour or two we left the sand tracks and came to a large mud flat that was partially flooded. I stopped and turned my front wheel caps to engage us into 4 wheel drive. Cautiously we entered the mud and after going about 75 feet our four wheels were all turning and we were at a standstill. The more we tried to go the deeper we sank. Elaine and I knowing we were in deep mud and there was no one in sight we decided to get out but I took my trousers off and Elaine took her skirt off to keep from getting them muddy. We scoured around looking in vain for something to put under the wheels to give us traction. I did have a few tools and decided to take the tailgate off and use it as a footing to put the jack on to try to lift one wheel at a time out of the mud hole and put under them branches from scrub bushes that we could find under the wheels to give us traction. It was May and the temperatures were scorching hot – maybe as high as 140 degrees. After about two hours of wallowing like pigs in the mud we were ready to give it a shot. Our next concern is that everything that grows in the desert is loaded with thorns we did not need any flat tires. We climbed in the pick-up, we slowly began to move forward and praise the Lord we were out of the mud. We stopped put the tail gate back on, put the jack back behind the seat and continued on our way. My legs were covered with mud to my thighs so for the next hour I drove in my underwear. Driving in the desert in the sunlight is very difficult as you cannot see the bumps or washouts as the sun is directly over head and there are no shadows. Then we hit a bump and the 55 gallon drum bounced up and came down pinning Butch’s sandal under it, but just missing his toes. God is so good. His toes could have been severed. As I got out of the truck I found that all of the mud had dried on my legs attaching itself to every hair on my legs. Ouch, Ouch I screamed as in stretching my legs from the seated position I tore all the hair off from my legs. After lashing down the drum and the cases I put my trousers back on over the dried mud and got back in the seat and tried to start the engine. Not a sound. Apparently the starter went out on it. The guy I bought the vehicle from had made a hand crank but he must not have used it because it did not fit. I was not a mechanic and its noontime; we are baking in the hot Sahara sun. We’re in deep sand, no way to push, no hill to go down so I could try to throw it into gear to start it. We are in the middle of nowhere. Off in the distance I see a shepherd, I blew the horn, but there was no response. We huddled into what little shade the vehicle would give, aware that vehicles seldom traveled this road. Our small children and Elaine and I were already exhausted from the previous episode in mud. We began to pray and asked the Lord to help us. We had already expended a lot of our water. Our girls hated carbonated drinks so Elaine, Butch and I consumed a lot of it. We needed the sugar as we were physically exhausted. After about an hour we began to hear the noise of an engine. Was it on the ground or in the air? Soon it was apparent it was on the ground and it was God’s miracle taking care of His dumb sheep. The vehicle was a French Renault Caravan similar to a Chevy Carryall loaded with about 12 husky men, some nomads, others black Songhai. They stopped and after explaining our problem they all went to the back of our pick up and began to push in the deep hot sand. We did not go far when I threw it into gear and the engine ignited and began to purr. We thanked them profusely and they went on their way and we went our way in opposite directions. The Hand of the Lord again provided help in a time of need.

This book is not merely a history or a biography, but a testimony of how the hand of Lord used me with all of my failures to his glory. After more than 60 years of missionary service and seeing the hand of God work miracle after miracle, I am excited to share with you His mighty works that I witnessed while serving Him in Timbuktu and beyond. This book conveys the exciting adventures and wonderful joy of serving the Lord. I trust that through this book you will be encouraged in your service to God wherever that might be whether in Kalamazoo or Timbuktu.

David Marshall, Sr. served as a missionary in Timbuktu, Mali for 20 years. He then served as Director of Evangelical Baptist Missions for 21 years. During his tenure as Director the mission relocated and experienced tremendous growth. After retiring from his position as Director of Evangelical Baptist Missions, David Marshall became the chief administrator for Double Harvest’s agricultural project in Haiti. He served in Haiti for 13 years. He and his wife Elaine now live in retirement in Blacksburg, VA. Dr. Ted T. Cable is Professor of Park Management and Conservation and Assistant Department Head in the Department of Horticulture, Forestry and Recreation Resources at Kansas State University. He has authored 11 books, several book chapters and scenic byway video scripts, and more than 200 articles and presentations dealing with nature, birds and environmental interpretation. Ted has worked extensively in Europe, West Africa and Latin America as well as throughout the United States training park rangers and naturalists and designing parks and natural areas.