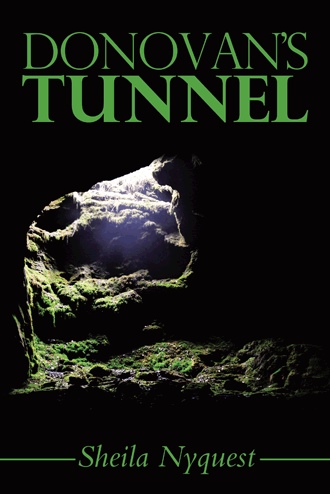 When the bow of my skiff hit the shore I was thrown forward into the boxes and bags of supplies, and then tumbled out headfirst onto large jagged rocks. Half crawling and half running, I scrambled up them until I reached the tree line. Grabbing at the loose dirt and branches along the bank I pulled myself up into the trees, and without looking back, ran.
And ran.
With each step I took, I expected someone to grab me.
Soon, the salty blood from my head ran into my eyes, blinding me.
I had to stop.
While squeezing my lids together tightly, I bent over and put my hands on my shaking knees. The whole world was spinning and I felt like throwing up.
I gasped for air.
When my heart rate finally slowed to a more normal pace, I stood up and wiped my face off with my shirtsleeve.
“Ouch.” There was a large cut above my right eye and my shoulder was throbbing with pain.
I reached out for a tree and leaned up against its cool bark. As my vision finally cleared, I remembered my pursuers and frantically began looking in all directions around me.
The only thing moving was the remaining beams of sunlight from a small opening in the clouds as they pulled back like giant fingers through the trees.
A few feet in front of me, was an old stump that had fallen over. Its long roots had pulled up the ground next to a huge moss covered rock making a perfect little cave. I got down on me knees and peered in, hoping that nothing would pear back out at me.
It was empty.
After quickly gathering up some dead branches I got down on my hands and knees and backed in. My head was pounding and my shoulder was aching worse than ever as I maneuvered in the small space, but I finally got the opening covered.
Throughout the remainder of the day I rested in my rock and earth womb, floating in and out of drowsy consciousness. It didn’t take long for the little bugs to find me and start crawling out of their hiding places in the dirt and wood around me. I squished and slapped at them as they climbed on my arms and in my hair.
I had never been alone in the forest before and with every sound my heart skipped a couple of beats. I was afraid to leave my hiding place and venture out into the darkness, but finally, I could stand it no longer.
I pushed away the labyrinth of branches and crawled out.
I had no idea where I was, or even from which direction I’d come. Tears slowly began to trickle down through the blood and dirt caked on my face as I crouched back down with my back against the rock.
“Julie, help me. I don’t know where you are, but I need you,” I whispered quietly to myself.
The unknown trials that awaited me in the darkness were not enough to make me climb back in with the bugs. Finally, I worked up the courage to start moving over and around the maze of trees that had fallen and were now serving as hosts to the moss, ferns, and skunk cabbage that covered them.
I slipped on the wet leaves and stumbled time and time again when the roots and vines grabbed my feet. The prickly stocks of devils club bit into my arms and legs as I passed by and their stinging barbs dug deep into my soft palms each time I accidently grabbed them.
Just when I thought I could bare it no longer, I came to a large clearing full of tall marsh grass. Although I sunk up to my knees in the cold stinky mud with every step, it was a welcomed relief form the dark forest.
Half way across, I ran into a boardwalk that was about three feet off the ground. The Forest Service put them in so that people could walk through the swampy, muskeg areas without struggling like I was. Some of them went for miles.
I grimaced from the pain in my shoulder as I fought against the suction of the water and mud to clumsily hoist myself up onto the smooth slats of wood. Thick brown goop dripped off of my extra toughs as I tapped them together and brushed off the weeds and cobwebs that I had gathered along the way.
When I finally lifted my head, I let out a big sigh of relief, “Ahhh, good!” Towering high above me, just off in the distance, I could see the silhouette of a snowy mountain range.
I knew right where I was.

The Alaskan wilderness. The end of the world. A secret tunnel. A dark past. Angels and demons. Sin and redemption. The war of wars.

God's final battle for His chosen ones is the backdrop for Robert's spiritual journey. As he struggles for survival against principalities, the elements, and his own dark past, Robert is also faced with the painful reality that he may have to release the one thing in his life that he wants to hold on to the most. Under Donovan's guidance, Robert confronts the questions that all men must answer. The closer he comes to the truth, the harder the enemy hits. Then tragedy strikes, leaving Robert to fight not only for his own soul but for the souls of others.

Sheila Nyquest, a school principal/special education director, has worked with children and their families in the public school system and in church settings for over twenty years. While growing up, she experienced many hardships and, as an educator, has seen other children living in situations that create a sense of fear, lack of trust (especially in adults), and feelings of hopelessness. She wrote this book to help create an awareness of their pain and give them a hope in something different. A hope not found in a better education, money, a stable family, or any of the things she ever thought would change things for her, but only through a relationship with the Lord Jesus Christ. Sheila lives in Thorne Bay on the Prince of Wales Island in southeast Alaska, with her husband, two teenage children, and their Lab. They enjoy participating in all kinds of sports and spend much of their time out in the wilderness subsistence hunting, fishing, and berry picking.