Uncovering the Hidden Secrets of Life in the Pews

by Dr. Elaine A. Brown Spencer 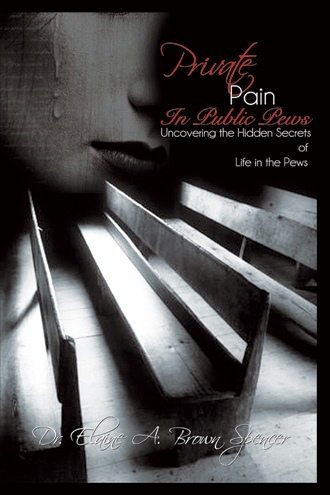 The challenges we face in life seem at times to be more than we can bear. Unfortunately, the one place where we ought to find solace, peace and healing has too often become little more than a Sunday morning soap opera. We in the church present an image that everything is okay, but if we “lift up the carpet”, we see “a whole heap of mess underneath”. People in the church are struggling to keep it together. Church folk have masterfully taken on false identities that feed the religious community’s expectations of the church, while draining them of who they really are. This creates the ingredients for a downward spiral, where people try to amputate their pain from their reality. In this chapter I will engage in “real talk,” which is a no-nonsense conversation about what we know but don’t want to talk about. “Real talk” is the story that has not been told. This is not an attempt to air our dirty laundry, so to speak, but to wash it clean by acknowledging that there is a problem.

The testimony service that was once tantamount to a public victory proclamation is becoming an endangered species within modern churches. Sadly, it has been replaced by hidden testimonies, not of victories, but of failures experienced behind church walls. These hidden testimonies are not heard in a church service accompanied by songs of praise; they are heard in private discussions and whispers about the lives of saints who have allegedly fallen. Those real testimonies have been archived in the silent screams of church members. The problem is that, because we prefer our own versions of the story, we are not tuning in to the real talk that exists behind the screams. As a result, many of the public displays of infidelity, embezzlement and scandal are never understood in context. Secret acts of indiscretion that have not gone public have stories behind them too—stories that we’ve never heard.

Too often, church folk are like fish in a bowl who have become so accustomed to their environment that they don’t notice which of them are being fed or underfed. One day, all they see is one of their fellows floating at the top of the tank, no longer able to live in its environment. Many church folk today have not been properly fed and so have ceased to thrive in their habitat. Too often, they manage to go unnoticed—until they are belly-up on the surface.

What if we were to pause to learn the story that is never told? Could we retrain ourselves to think before jumping to conclusions about those caught up in sin? In the next few pages, I will introduce some folks who may remind us of real-life members in our churches—members we all may have heard about. A deeper look into the lives of these fictitious characters can help us to connect some dots as to what is going on all around us. But, before we hear the characters’ real talk, let’s listen in on some whispers and testimonies about them.

Dr. Elaine Brown Spencer’s courageous new book breaks the silence and tackles issues in the church we’ve let ride too long. In a poignant view of church happenings, the book emphasizes that everything in the church is not what it seems. The church is filled with broken people, victims of trauma and unresolved issues that have put a clog in the church engine. The one place a person can find relief from their pain has sadly become a Sunday-morning soap opera where we cannot wait to hear the outcome of a person’s indiscretion. The private pain that pew members experience is real, unspoken and devastating. The time has come to break the silence and do “real talk,” about what we all know is going on.

Private Pain in Public Pews says it all – this book is a must read that gives remedy, hope and insight that is sure to give you a new perspective on church and life itself.

Elaine A Brown Spencer, Ph.D., Speaker, Counsellor, Professor, Founder & President of Kaleo Inc. has written a gutsy new book that is a compelling “straight talk” reading of life in the church pew. A scholar of spiritual-religious experiences, Dr. Spencer earned her MSW & Doctorate degree at the University of Toronto. Elaine bridges the academic and religious community in her writings to emphasize the need for persons to remain anchored in their faith, particularly in these trying times. Elaine lives in Toronto, Ontario, with her husband, Floid, and they have three children.